ANDREW HEWITT IS a generous, caring and determined drummer who is trying to make a difference as to how people with disabilities are seen by the world. 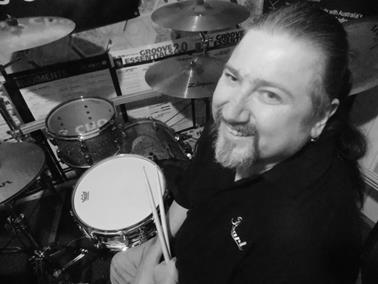 Andrew’s passion with drumming started when his parents bought him a drum kit in 1980. Drumming started out as a form of physio therapy, instead of playing school sports or any other physical exercise. Being born with Spastic Quad Cerebral Palsy which  restricts movement in his arms and legs, has put obstacles in life but obviously Andrew has crushed every challenge he has faced.  In 1989 he was in his first band, then in moved to Melbourne  in 1992 from Tasmania. Since moving to Sydney in 2001, Andrew has flourished.

For the past twenty years Andrew Hewitt has enjoyed being a Drummer, Performing Artist, Motivational Speaker, Workshop Facilitator, and Disability Advocate. He was even nominated for the Australian Of The Year 2014. Andrew’s extremely proud of his position as a board member of Can-Do Musos, a worldwide organisation supporting musicians and bands who live with disabilities. Also Andrew enjoys running workshops for students who have disabilities, watching their worlds open up through his support and guidance.

I had the absolute pleasure to interview Andrew and have got to know him. Thanks Andrew for sharing so much with me.

Hi Andrew! Thanks for being on Gigs ‘n Interviews and for seeking me out me on Facebook. Can you tell us a little about yourself and your drumming career thus far?

I have been a drummer for the past thirty-five years, have traveled and performed all over Australia and parts of the USA. Over the years I have become known locally and internationally as “Australia’s most inspirational drummer”. This was a name given to me by prominent drummers in Australia and overseas, just because I never gave up.

I was born a Spastic Quad Cerebral Palsy, which affects all four limbs. I use a wheelchair to get around, but this has never been a problem for me, I have actually managed to turn it into a positive when relating to my music and life in general. However, it does make drumming a very serious challenge.

I teach drums from my home in Westmead here in Sydney. Most of my students have a disability of some kind or another, whether it is Cerebral Palsy, Acquired Brain Injury or Autism. These lessons aren’t about finding the next Ringo Starr or John Bonham; they are more about self-confidence – giving the student a sense of self achievement.

As a teacher, I guess I also take on the role of life coach and friend. Often I film lessons, and post them on YouTube, so the student’s friends can see it and tell them how cool it is… giving them a huge confidence boost. My studio at home is setup with two drum kits side by side and a small PA system, so I can use backing tracks during the lesson so students can learn different songs.

I also teach over the internet via Skype. Using an overhead webcam and mics on the drum set, the student gets a crystal clear image of what I am teaching them. Sometimes I do solo gigs, and drum clinics during which, I play drums and talk about the physical challenges I deal with, and different ways I overcome them.

At the moment, I am playing in a cover band around Sydney called That Other Band, we do pub rock covers, classic rock songs people want to hear at a pub on a Friday or Saturday night.

Your parents bought you a drum kit as a Christmas present in 1980 which began your love of drumming. Can you still remember the feeling when you hit the drums for the first time?

Hmmm that was a while ago. I saw a photo of that Christmas morning recently, and the grin on my face was priceless. One happy ten year-old… less happy neighbours.

What is your role being on the board of directors for the worldwide organisation Can-Do Musos?

Can-Do Musos was established at a meeting I attended in New York in March last year. Three drummers with disabilities met at the studio of Dom Famularo in Port Jefferson on Long Island, to discuss the frustrations of being a musician with a disability, and how we always get passed over when it comes to real opportunities out there.

We want to change the attitudes toward musicians with a disability out there. There is so much talent out there, but because someone has a disability, they may not get the same chances to be seen or heard.

Our website http://www.candomusos.com now features 125 musicians with a disability or “challenge” as we prefer to put it, from fourteen countries across the globe. Thirty-eight of those are from Australia. We call it our Can-Do Musos Family.

We use the term challenges more on the website, because sadly as you probably understand… add the word disability into the equation, and automatically people think inability. We are trying to show the world…WE CAN!

My role at Can-Do Musos as a founding board member, is the web guy, and newsletter editor. We have board meetings once a month on Skype, discussing how we can move forward with Can-Do Musos as an organisation. We are currently working on getting set up as a non-profit organisation in the USA (Non-Profit Organisation), this is so we can then raise funds and create Can-Do events in various parts of the world. We are planning to put Can-Do Musos in the spotlight at The NAMM Show in Anaheim, California in January 2015. I am working to get myself over there in January to represent Australia and Australian musicians with a disability.

If someone goes to one of your drumming workshops, what can they expect to learn?

Depends on the workshop, but the main focus is just to have fun, and let go. 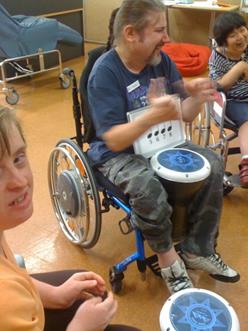 As well as your drumming workshops, you are a TRAP (The Rhythmic Arts Project) facilitator, which involves you teaching people with disabilities to read, write and count using drums and percussion. How does this method work?

TRAP is an amazing educational program I picked up while I was in the USA last year. I attended a three day train the trainer seminar, which made me Australia’s first TRAP facilitator.

The program was created by world renowned drummer Eddie Tuduri as part of his own rehabilitation from a spinal injury. TRAP has been running successfully in the US, Canada and South America since 1997.

TRAP is a way for people with learning difficulties to learn to read, spell, count, and use basic life skils such as telling the time, by following guide books, and flash cards, beating and counting on a hand drum or percussion instrument such as a shaker or tambourine.

I am working on getting the TRAP program out to disability centres and special schools across the country as we speak. In Australia, I am using the name TRAP’D (The Rhythmic Arts Project Down Under).

When you see children smile and come out of their shells because they are able to express themselves through music, I can imagine how satisfying it must be for you. Is this one of your favourite aspects of what you do?

Most definitely! I have always said if I can give one person, or one family a little bit of hope. My job is done. I presented at a conference in Adelaide a few weeks ago, and had a young drum student come and help me with the presentation. He is eight years old, has CP (Cerebral Palsy) and is drum mad! I give him lessons every fortnight via Skype.

In 2014 you were nominated for the Australian Of The Year award. This must have been incredibly humbling. What gives you more pleasure; drumming, doing your workshops or TRAP?

Just being nominated for Australian of the Year is something to be proud of. I got a certificate in the mail, which I have proudly hanging on my wall. I didn’t make it as a finalist, but just to be nominated was a huge honour.

I have always loved performing in any way, shape or form, but I think the most pleasure I get from it all is teaching, whether it be drum lessons or TRAP’D. The response I get from the students, the smiles, makes it so rewarding.

Naturally Rick Allen from Def Leppard is one of your idols, but you also list Animal from The Muppets as one too which made me laugh because that’s very cool! What do you admire about these two musicians?

I remember in the late 80’s when I first started playing in bands, I saw this video clip on Rage. It was for Def Leppard’s Pour Some Sugar On Me. Rick was using a Simmons electronic drum kit, and then it dawned on me… Woah, he only has one arm! His determination and drive to get back behind the drum set after his accident and continue to play at that level was amazing. Rick Allen was the first drummer (although we have never met) who taught me, no matter what life throws at you, never give up.

Animal… well what can I say… Animal… he is my alter ego… must be a hair thing. My wife Jen tells me that’s how I look each morning when I wake up!

If you had the choice of playing with another drummer (alive or no longer with us), who would it be?

John Bonham, if you have heard his playing on Moby Dick (Led Zeppelin), you would understand why. The guy’s grooves were amazing.

Thanks Andrew for your time and letting us into your life!

For more info on Andrew, please check out these links: