PHIL BARLOW IS A great lyricist who is raw and honest in his music. The Brisbanian claims he has “authentic blues vein mixing” in his brain, and like many great blues legends Phil’s music has a dirty rock rhythm that’s very honest and raw.

Phil’s track Like A Drug is the perfect dirty rock tune that’s very Hendrix-ish. There’s no pussy-footing around; Phil is unapologetic with his direct lyrics.  His tune Faith Or Fear is the ideal track to drive to or ride along on your motorbike on a sunny day.

Phil and his band Phil Barlow & The Wolf are celebrating the release of their single Faith Or Fear by touring Queensland this September.

Thank you to Phil and your agency for your time doing this interview. I really appreciate your awesome answers Phil.

G’day Phil! Thanks so very much for talking to me. Watching your little YouTube movie, I gotta say you got an organic bluesy sound that comes from the soul! Where did your interest of bluesy rock originate from?

My true passion for music started a little later than most artists seem to. It was only a few years ago that I felt I woke up into the world of great music. This was when I delved into bands like The Doors, Led Zepplin, ZZ Top, Jimmy Hendrix, Steve Ray Vaughan & BB King. I also dig The Black Keys, Wolfmother and The White Stripes. Most recently though, after freshly landing from a two month journey through Chicago, New York and New Orleans, I have a more authentic blues vein mixing in my brain.

Your new single Faith Or Fear immediately reminded me of the great Jimi Hendrix, with your catchy guitar hooks and intelligent lyrics. Where did you record the track?

Thanks for using Faith Or Fear and Jimmy Hendrix in the same sentence. Cool. We recorded it at Love Street Studio’s on the Gold Coast, great working with recording/mixing engineer Scotty French. He knows his shit.

Like A Drug captures your rock ‘n roll sexy vibe! I bet your crowds go wild when you play it?

{laughs} Glad you dig the track, thanks man.  Desire is such a powerful emotion and I love getting lost in when I playing that song live. Yeah we usually get some good vibes coming back!

It’s very impressive how you mix and mash genres together… ie: blues with reggae, rock with blues, acoustic guitars with horns. How do you come up with these arrangements?

I’m a bit of a philosopher. I love observing the human condition. Of all the interesting edges of the human mind, it is creativity that baffles and intrigues me the most. Listening to recorded music and live acts influence what’s in my head, but when I’m in the timeless space, there is no thought. Words, notes, tones come out spontaneously and all I have to guide the creation is a feeling that knows if it’s the right direction to express what’s trying to come out. Two hours later I am listening to a draft recording on my iPhone puzzled as to how I created it. Honestly, it’s this beautiful mystery of my mind that will see me a songwriter as long as I’m alive!

You with your band The Wolf tour the country doing festivals and pub gigs, often doing gigs the day after the next. Do you get inspiration for new material visiting so many places or are you just exhausted? 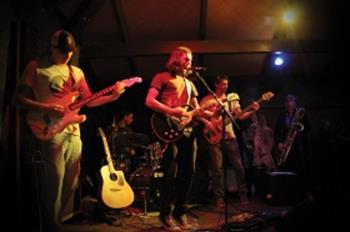 We have played around a bit in support of the Phoenix Rising album and have a great run of shows starting September 6th, but I feel the next couple of years we are going to gig heaps more. Compared to some of the blues players in the states who have gigged five nights a week for thirty plus years, I feel like we have only just opened the blinds. We are so amped up to gig as much as our bodies will let us! Shows are getting more intense, and that energy is like a drug, it’s an amazing feeling sharing your own music to an appreciative crowd. Do I get inspiration visiting new places? Hell yeah! I’m very excited to song write with this authentic gravel bed blues now sitting comfortably on the backburner. First though, we gotta smash this tour and have the time of our lives! Yeeuw!

The US was a solo journey, not yet with the band. I mostly went to study great musicians, although I did perform a few times. One night in Chicago I put my name down for a jam night at a place called “Buddy Guy’s Legends”. As I’m listening to his band, Buddy Guy himself walked on stage! After he sung a few, they then called up jammers from the list and my name came up first! I freaked out! Then I manned up and got up there with seven random musicians making up the jam band. I had a quick word with the band and we played Bad & Lonely, a pretty straight forward but driving bluesy track off Phoenix Rising. The crowd were into it and also still warm from Buddy Guys performance. It was one of the most intimidating yet rewarding nights of my USA trip!

I have to ask, being a massive Diesel fan myself. Is Diesel one of your influences?

Don’t like to disappoint, but he’s not on the playlist. Although I really dig the guitar rhythm from his track “Tip Of My Tongue”. Simple but grippy.

Do you hope when Phil Barlow & The Wolf are touring Oz, more people discover your amazing music?

Hell yeah! There is already a bunch of new people that I’m connecting with on Facebook and Instagram, I’m guessing it’s through the music video release and recent media coverage. What I really look forward to though is playing live to both new and old supporters. It’s all about the live show for us, that’s why we do it. There are a surprising amount of online based music lovers these days, which are still appreciated, but I hope to continue to build a strong live following. To reach people that love to be moved by live music.

Thanks so much Phil for your time and for making such awesome music.