ADELAIDE singer/songwriter Zac Eichner is one of those artists you find yourself drawn to. When I listened to his latest single Not A Break-Up Song, his sensibility reached through my speakers. Interviewing him I discovered he’s a thoughtful soul who is giving back to society. 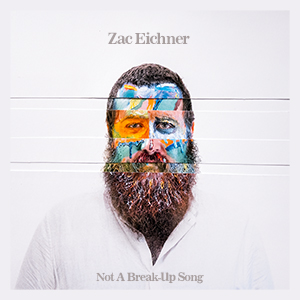 The inspiration behind Not A Break-Up Song is a very personal story of Zac’s struggles with depression, anxiety and self-destructive behaviour, but fortunately, he has been able to break that cycle. He now hopes he can help others navigate through their journeys.

Often artists release a great video but a many few mirror the emotions in the lyrics so well. In Zac’s case for Not A Break-Up Song, he asked an extremely talented dancer Rob McLean to come up with a one-shot improvised dance that reflected the tone and emotions of Zac’s lyrics.

For you lucky Adelaide people, you can catch Zac doing a set this Saturday and Sunday (May 7th and 8th). Tickets are available HERE.

A big thank you to Zac for your chat and heartfelt answers.

Hi Zac! How are you? Congratulations on your latest single Not A Break-Up Song. People would assume it’s a song about breaking up with someone else, but this isn’t the case. How would you describe the song’s background?

I’m well thank you! Thank you so much.

I suppose it’s an internal break-up. It’s a song about my relationship with myself, and how I’ve managed to pull away from my toxic traits and behaviours. I could have named it anything, but Not A Break-Up Song felt ironic, a little cheeky and a lot more playful for lack of a better word. It’s not only about my growth as a person, but as a muso too! I’ve been very serious and very sad for a long time, and this song of hope and development deserved a developed title too.

I found Not A Break-Up Song to be brutally honest and raw. After you wrote it, did you feel free and cleansed?

Absolutely! I had a lot to get out. I had some real heavy stuff going on when I started writing the track, and by the end, I had found some beautiful resolutions and people, that unknowingly helped me finish it. I was left feeling hopeful for the future and cleansed as you said.

The video just involves an improvised dance by the extremely talented Rob McLean. What inspired you to choose him to do an impressive one-take shot of movements to reflect your lyrics?

Rob and I have worked together a few times, but never quite this directly. He is unbelievably talented, and I adore the work he puts into himself and the dance community. I often show him the songs I’m writing as they’re in production/demo stages. This track was no different. I showed Rob and asked if he could put something small together for a bit of content if he feels like moving to it at all – sure enough, a few days later he had sent me something that could NOT be a music video. I think we both got the release we needed from the final product; unapologetically vulnerable and honest.

Listening to the track, it had a gospel element towards the end symbolising release, hope and light for your future. Do you hope other listeners might get these things from Not A Break-Up Song for their own lives?

I think lyrically it’s ambiguous enough for listeners to hopefully get what they need from the track, whether that’s a vocal hook you can belt and not think about or a deeper meaning on overcoming darker habits, I’m not too fussed. I just hope everybody can get something from it. For me, it’s absolutely released hope and light, but for them? I’m not sure.

You’re passionately involved in preventing and supporting youth who have experienced and are experiencing self-harm with The Carly Ryan Foundation, which is an important cause in today’s world. How can people get involved?

The Carly Ryan Foundation is an online harm prevention foundation. I’m fortunate enough to go to schools and speak to kids about how to keep themselves safe online and look out for their mental health and wellbeing. It’s not directly associated with self-harm, but I believe the work we do certainly helps prevent and protect our youth from things that may lead to it.

I’m actually on the hunt for new presenters, so if any South Australian folk are eager to get involved, feel free to reach out. Spread the word and donate if you’re in a position to do so!

Thanks so very much Zac for the chat! I wish you all the best for your future!