BROOKE SCHUBERT IS one brave and determined woman! Within twenty-four hours her dream came true after uploading a video to YouTube titled Dear Keith Urban to capture Keith’s attention before his Light The Fuse tour. 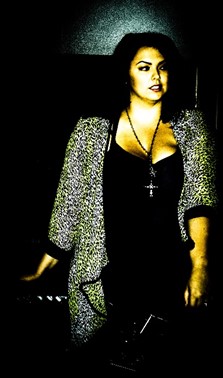 But before I get to that, let’s rewind because Brooke has had an amazing run in the music industry. At the tender age of ten she sang in front of 25,000 people at the Gympie Muster after winning a talent quest. In the years ahead Brooke was the support act for Tina Arena and Rick Price. Also she has been incredibly fortunate to share the stage with Joel Madden, Kasey Chambers, Jimmy Barnes, The McClymonts and Jessica Mauboy.

In 2013 Brooke recorded her EP over in Nashville with Matt Fell and Sam Hawksley. That EP received plenty of attention, even earning Brooke a nod for the top 5 unsigned vocalists in the world’ by songuniverse.com which was judged by Chaka Khan and P!nk’s songwriter/producer Billy Mann.

Brooke is a massive Keith Urban fan, she’s gone to every tour so Brooke decided to put her wish out to the universe and make the Dear Keith Urban. In the video Brooke outlined the many similarities to herself and Keith, and how it was destined to sing with him. Low and behold, twenty-four hours later Keith phoned Brooke and she found herself touring Australia with him, doing six arena shows.

Brooke is a fun and determined young woman and it was a real pleasure to chat to her.

G’day Brooke! How are you? Have you come down from touring with the delightful Keith Urban yet?

Honestly, I’m not sure that I ever will. It was such a positive experience in every sense of the word. I’m a very lucky lady!

You must be a brave woman to post a video on YouTube titled Dear Keith Urban that was obviously successful capturing the superstar’s eye. The video is adorable by the way! Can you remember your first reaction to Keith responding to your video?

Thank you, I was being tongue in cheek…I never expected him to see it. I burst out laughing, uncontrollably, on the floor in a state of shock. My husband and my best friend thought I was crazy… They still do.

You say Keith has given you some advice and guidance with your career. What type of encouragement did he give you? 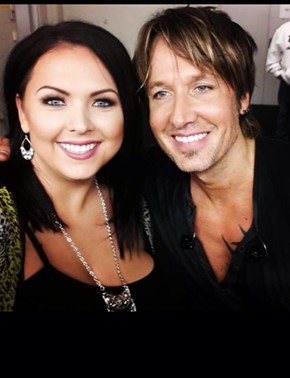 Yes, Keith spent ten years in Nashville before making any sort of dent in the market. If you think you’re in a situation and you’re doing it tough. He’s been there a million times, and had it harder. He knows that I’ve been working at this for a long time, and He said just believe in yourself and listen to your instincts. They are always right. Surround yourself with people that are a representation of you and your personality and vibe. Turns out, I’ve always been on the right track.

You were destined to become a success story as when you were ten you won the Gympie Muster and sang in front of 10,000 people. How did you handle your nerves when you were so little?

I believe that it’s true when people say that kids have no fear, I see it in my two year-old son. I knew I wanted to sing, I knew that I could, I had the opportunity, so I did. As children we don’t over think anything, Everything is as it is. It was a blast.

Before even Keith, you recorded your EP in your favourite place, Nashville. That must been an awesome experience?

To work with Matt Fell and Sam Hawksley over in Berry Hill was an eye opener. Working with musicians who have recorded with everyone from Coldplay to Tim McGraw, Brooks and Dunn to Tom Petty and my fave, Linda Ronstadt. The studio musicians talents are incredible. We recorded a five track EP in two days. Crazy.

Besides Keith, you have performed with some of Aussie’s legendary performers including Jimmy Barnes, Kasey Chambers (she’s such a dag eh?), Lee Kernaghan and John Williamson! That’s quite an impressive rap sheet! Do you pinch yourself thinking how much you’ve achieved?

I guess I have had a pretty good run, I forget to be honest. I’m not the sort of person to sit back and think about everything that has happened.. I’m way too busy planning my next move.

You’re a true country gal, but on your Facebook you’ve recently posted a video of your cover of Beyonce’s Halo, which shows off your beautiful soulful voice. You could easily go into pop. Would you ever compliant this move?

Well, thank you first of all… Beyonce is one of my favourite vocalists right now beside Renee Geyer. My own music represents my love of Music, not one particular genre. My mum loves Simon and Garfunkel and Donovan, My dad loves AC/DC and Stevie Ray Vaughan, My brother is into House, and I love Bonnie Raitt, Butch Walker and Pink… My music isn’t any one of those… It’s all of them. Why can’t music just be music without the label these days. {smiles}

Touring with Keith, doing seven shows all over Australia, has it made you in awe what major artists/bands do?

Absolutely, I don’t know how they (the Urban family) do it. Between early morning media, Meet and greets, sound checks, Warm up, two hour show, Warm down, media scrutiny about your family, normal kids stuff. It’s such a busy, busy life. The team of people keep the show 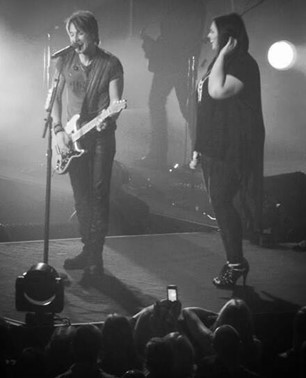 You’ve become an envy of us Keith fans, getting up-close to him. Did he smell divine? {giggles}

{laughs} I was too busy in awe of him to catch a smell, although, I’m sure he’d smell like his cologne!

Thanks very much Brooke for taking the time out between your Mummy duties to answer my questions! I wish you all the luck with your future!