Jacqui James Leave a Comment on Watch Out Australia, Johnny Ruffo Has The X Factor!

After being a X Factor 2011 favourite with the teenage and some lady voters, 2012 has turned out to be the year of Johnny Ruffo by supporting New Kids On The Block and Backstreet Boys on their Australian 2012 tour! This time last year Johnny Ruffo was just another concreter, but Australia’s latest pop sensation has 63,247 likes on Facebook. 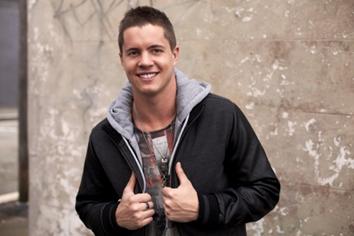 This year we have seen a lot of Johnny on our TV screens. For the Royal Children’s Hospital Appeal he donated his time answering the phones and having fun with the other celebrities. Then recently he danced away to become the winner of the Australian version of Dancing With The Stars and like on X Factor we saw how Johnny is very earthed but always took the first opportunity to show his cheekiness to impress the judges and the viewers at home.

Now Johnny Ruffo has released his debut single On Top and it definitely has his cheeky stamp on it. He insisted the line “I’m top of you girl” to be included against the strong wishes of the co-writers, which was a gutsy and liberated move on Johnny’s part I believe.

Later this year Johnny will be the support act for the biggest pop band in the world One Direction which he’s very excited about. And to think Johnny is only 24!

I can hear the screams of jealousy from teenage girls when I say below is an interview with Johnny Ruffo! (I dedicate this interview to Ebony!) Thanks Nadia from Sony for organising this interview.

Thanks for making the time to do this interview especially with the amazing week you’ve had with the release of your debut single On Top and then you won Dancing With The Stars. Pardon the pun, but you must be feeling on top of the world right now?

{laughs} Yeah everything is going so well for me at the moment. I don’t have a lot to complain about. I’m in a good place. {smiles}

What did your family and mates think when you told them you were going on Dancing With The Stars?

They thought it was a great idea and would be good experience for me… Although some of the boys liked to give me a little slack! {laughs}

The video for On Top is very cheeky (which is what many people think fondly of you). Was this its intention to be a little naughty? {Jacqui laughs}

Yeah the reason I decided to make it fun and cheeky is because that’s pretty much the way I am. I love to enjoy life and have fun and I wanted the video to reflect that, although I do start out as one of the hotel staff {winks Johnny}.

You say you insisted the line “I’m top of you girl” in On Top even though the co-writers were against it. Why was this so important to you?

Well I thought it would be different to be a little bit cheeky in the song, there aren’t many Australian pop artists that push the envelope lyrically so I thought, why not?

How have you adjusted to your new life as an artist and a celebrity?

It’s been a big change and it’s very different but you just need to understand that it is a part of the industry and you are required to be a “personality” everywhere you go. You do lose a lot of your privacy but that is part of the package and I wouldn’t change it for anything. {smiles}

It seems like 2012 is Johnny Ruffo’s year as you’ve already supported the New Kids On The Block and Backstreet Boys! If that’s not enough you’re supporting the biggest pop band One Direction later this year! Are you really excited or really anxious or both about performing in front of tens of thousands of screaming girls?

Yes 2012 has been an amazing year for me. I have toured with NKOTB and BSB, and also one direction, amongst other amazing artists. I have been extremely fortunate and I will continue to seize every opportunity that comes my way.

Are you still in contact with people from X Factor?

I try to keep in touch with the contestants but it is hard as everyone all busy doing their own thing – as am I! But when we all see one and other it’s like a big family reunion.

Did you find it ironic that on X Factor you were criticised for concentrating on dancing too much and here you are, the winner of DWTS 2012?

{loudly laughs} Well I guess it was meant to be! Although I found learning ballroom and Latin dancing on Dancing With The Stars was a lot harder than X Factor because I’ve never had a dance lesson in my life….

You do lots of charity appearances which is admirable. Is giving back to the community a part of you that has always been there?

Absolutely. I will go above and beyond to help those that are less fortunate, I believe that everyone deserves a little bit of help.

Later this year are you planning to release an album?

Definitely, I am hoping to have an album out by November providing everything falls into place!

To keep updated with Johnny, you can visit his site and subscribe to his newsletter.