Jacqui James Leave a Comment on U2 Amaze Melbourne

LAST NIGHT U2 PROVED why they’re kings of rock ‘n roll! When we walked and saw glimpses of their stage (actually the word stage isn’t the right word…their monster of a spaceship) through Etithad’s walkways you immediately think OH MY GOD! Quoting from their hit Walk On the stage “has to be seen to be believed” as words fail to describe it. 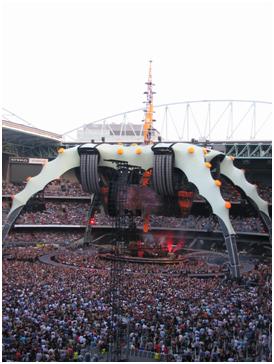 Unfortunately we arrived in the last twenty minutes of Jay-Z’s set but saw how he got the crowd going. He was so thankful to the crowd and U2 for enjoying having him there.

It was a beautiful night for the sea of people. I’m guessing there would have been around 50,000 to 60,000. I’ve never seen anything like it.

Back to the stage! Bono, The Edge, Larry and Adam walked onto the stage (or spaceship) Bowie’s Space Oddity blared over the stadium. The bass told everyone they were there for business!

Into the third song the spotlights were off and the stage/ship looked even more amazing . Later the centre piece turned into a huge video screen. Truly amazing! During City Of Blinding Lights the centre piece showed live footage as well as having multi-coloured lights! 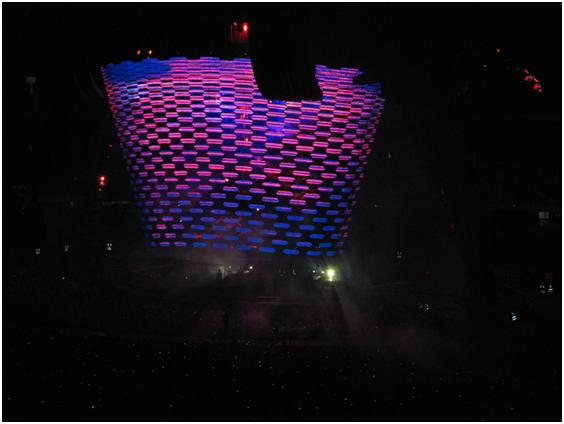 Sometimes it was all very overwhelming as you didn’t know where to look. I even had to remember to look at the band!

Bono’s sincerity hasn’t been jeopardized one bit. He was just as emotional now talking about his mate Michael Hutchence and dedicated Stuck In A Moment and later he invited Amnesty International volunteers onstage during Walk On to show support for prisoners jailed for democracy.

Bono still was in awe when the masses of fans showed how they had lungs as they sang hits like Elevation, Vertigo, Sunday Bloody Sunday, Still Haven’t Found What I’m Looking For, With Or Without You and more. He wowed us with his opera voice in Miss Sarajevo; this was very goosebumpy!

I’ll leave you to look at the photos!

Return Of The Stingray Guitar

End Of The World

Stuck In A Moment

In The Name Of Love

In A Little While/Miss Sarajevo

Amazing Grace /Where The Streets Have No Name

With Or Without You