In 2010 I began Gigs ‘n Interviews with the best intentions to showcase a diversity of music. I’m very humbled and honoured to say it’s seen as a platform for emerging artists as well a vehicle for big-named artists to get their voices heard through interviews. I often have a feature called Gigs ‘n Interviews’ Undiscovered Find showcasing promising artists/bands.

The feedback from artists/bands’ and entertainers’ agencies/management is always I’m “professional” yet “easy-going”. Deadlines are never an issue with me as I understand everyone may have other many interview commitments. to attend to.

My stand-out interviews would have to be Ed K from LIVE, the very funny Tim Smith, Ronan Keating, Adam Thompson (from Chocolate Starfish), Hollywood writer/producer/director Doug Hannah and Diesel.

All my interviews are conducted via e-mail.

If you would like to be featured on Gigs ‘n Interviews, you can get in touch with me by filling out this form:

I DOUBT THAT not many people know Dragon formed before Cold Chisel. I certainly didn’t, but with hits like April Sun In Cuba, Are You Old Enough?,April Sun In Cuba and Still In Love With You dominating the 70’s pub-life, Dragon have a certain place in Aussies’ hearts.

Following their success in the 70’s, Dragon found new fans with Rain, Young Years, Celebration and Dreams Of Ordinary Men in the 80’s.

However way before that, Todd and his younger brother Marc were influenced to play music by their Mum and Dad; playing in a band all together at performances. Todd was in a few bands before 1972 when with two of his friends from their previous band called Anteapot decided to form Dragon. Graeme Collins, the lead singer soon left the band saying he didn’t fit in.

Unfortunately drugs and alcohol played a vicious demon as Dragon lost their drummer Neil Storey in 1976. When Marc Hunter joined the band he had his own addictions, so Todd seriously completed breaking the band up indefinitely.

But as it goes, Dragon in 1977 had their breakthrough album called Sunshine which made them Australia’s number one band From then onwards (well not without more controversy with boozey and drugs antics from Marc) the band had major success in Australia.

Tragically Marc lost his seventeen month battle with throat cancer in July 1998. Understandably Todd didn’t know if they could or should continue with the band they had begun over thirty years ago. They did with Mark Williams as their lead singer in 2006.

The current line-up for Dragon have been wowing crowds at recent Day On The Green festivals and now doing gigs until August. (see tour dates below the interview)

I felt really honoured to chat with Todd and Mark. Thanks Todd to allow me to interview you two.
Without stating the obvious, Dragon were one of Australia’s best pub bands in the 70’s! Do you have a favourite pub (if you can remember {laughs})?

Probably the Bondi Lifesaver, it was a wild place. We used to live in the same Street and if a band didn’t turn up the bouncers would come and carry our equipment over and we would play

WOW! Dragon are celebrating their 40 years anniversary as a band this year (or next year?) Which achievements are you most proud of?

To be playing again is the best thing. It’s great to be playing to new generations of people.

When Mark sadly passed in 1998, how difficult was it to decide to find a new lead singer?

There was no band for ten years after Marc died. Then slowly it seemed like those songs should be played again.   In retrospect it was the right thing to do because when you get a few thousand people singing along it’s like Marc and Paul live on in their music.

You’ve been doing gigs around Australia, recently on the Day On The Green tour. I was at the Rochford Estate gig and you guys rocked! Why do you think you guys were the ones who got everyone up and singing?

{It’s} because they know the songs and because we are playing now with more energy than when we were twenty.

Mark, at the Rochford gig, you kept asking the crowd, “Are you pissed?” My question to you is did you in fact, did you get pissed?

No, I don’t drink… if I did I would have been dead long ago.

Which song is your favourite to perform?

O Zambezi live is one of those tracks that transports your listeners to another continent. Was this your purpose for this song?

Yes, Robert had been reading about Africa and it made its way into the song.

What is Dragon doing currently (besides touring)?

We are recording a new EP at the moment. Expect the unexpected.

Is it difficult trying to preserve the Dragon fans loved in it the 70’s and 80’s, but still progress as a band?

No, the great thing about being in a band is that you have to please yourself. Only then is it possible to please other people.

Is there an ongoing friendly rift between Dragon and Chisel, since not many people know Dragon formed before Chisel?

No, no rivalry, both bands are very different propositions.  We have been playing the same shows as Ian and Jimmy and it’s always good to see them.

Thanks Jacqui, all the best. 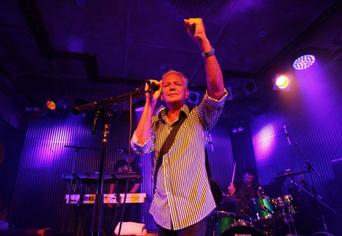 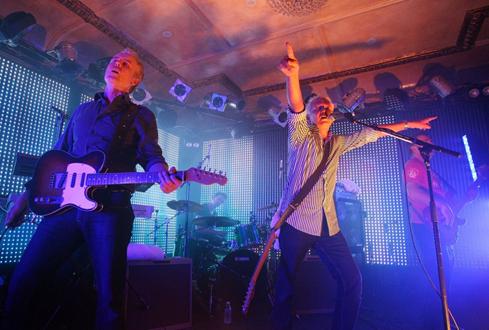