Skip to Content
Home Gigs There’s No Slowing Down Elton

Jacqui James 2 Comments on There’s No Slowing Down Elton

The 40th Anniversary of Rocket Man

FOR A SIXTY-FIVE year-old, Sir Elton John gave it his all as he and his band were onstage for just under three hours with a touching gesture at the end. And he announced he’s releasing a new album next year! 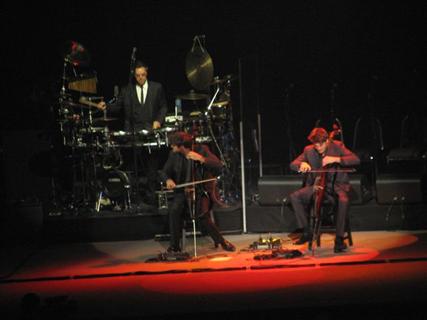 However, I have to mention one of his support acts 2CELLOS who joined Elton and his five piece band (plus four backing singers) throughout the concert. 2CELLOS is two very good-looking Croatian cellists who use their cellos to produce this rockin’ music! Last night they got the Melbourne crowd in awe covering Michael Jackson’s Smooth Criminal, U2’s With Or Without You (my all-time favourite so I’m glad they do it justice), Nirvana’s Smells Like Teen Spirit and the best until last ACDC’s Highway To Hell. I highly recommend you check their site out and here’s one of their live performances off their Facebook: 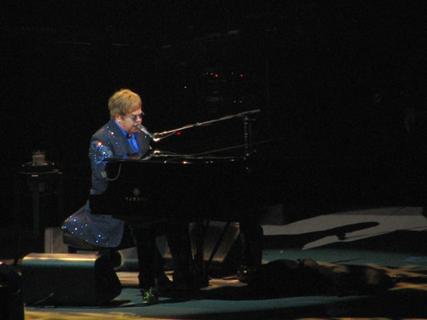 Sir Elton has been known for his outbursts and tantrums, but I think he’s at the stage in his life where he’s the most at piece. The first song he sang was The Bitch Is Back with BITCH written in pink on a video screen behind the band.

In his forty plus years music career, Elton’s back catalog is massive and last night he played probably all of his hits and more. He said, “We’re going to play songs you hear lots of and not so much.”

After almost every song Sir Elton stood up to bow to thank his fans. Often he walked across to the other end of the stage to wave and blow kisses to his adoring fans. He dedicated Tiny Dancer to his female fans.

Elton has some of the most talented musicians in his band and some can play several instruments. The musical director Davey Johnstone is on guitar and vocals, Kim Bullard is on keyboard, John Mahon is on percussion and vocals, the newest addition is on bass and vocals Matt Bissonnette, his backing singers (one has been inducted in The Hall Of Fame twice) and the only original member on drums and vocals Nigel Olsson. Plus with the frequent presence of 2CELLOS songs sounded not lacking with anything. Elton said, “It’s an incredible privilege to play all over the world, but couldn’t do it without the band.” 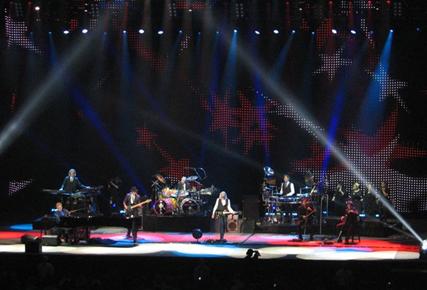 Levon with 2CELLOS joining Elton’s band sounded amazing, but my Mum’s all-time favourite Elton song Funeral For A Friend/Love Lies Bleeding gave me chills and I felt hairs stand up on the back of my neck. 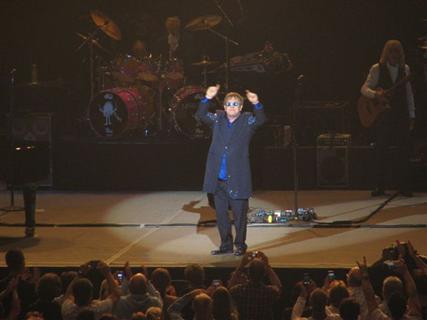 Elton spoke about his most memorable moment playing at the 9/11 concert before playing Mona Lisas and Mad Hatters. He also made reference to our bushfires and said he’s often “touched by human strength.” He also said how he’s played at both sad and happy occasions. When Candle In The Wind was played last night they very tastefully showed rows of lighted candles on the big screen behind the band.

After playing Rocket Man (I Think It’s Going to Be a Long, Long Time) Elton again walked across the stage to thank everyone for a standing ovation.

I’m Still Standing, Saturday Night’s Alright For Fighting and Crocodile Rock (which started with Elton playing Began with Waltzing Matilda) got the majority of people up and Elton blew a kiss to his audience.

I’ve been to a lot of concerts, but hadn’t seen what Elton did when he returned to the stage to do his encore. He spent about a good five minutes signing memorabilia for lucky fans in the front rows. 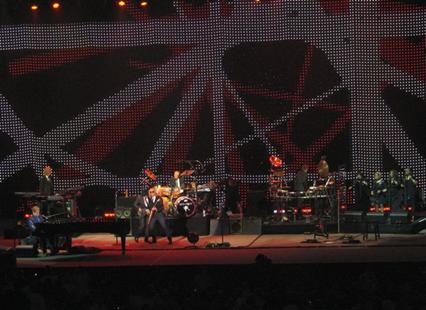 Before dedicating Your Song to us Elton said, “Thankyou so much Melbourne. I have so many great memories…Some I can’t tell!” He also said how he saw Coldplay on Saturday night and how proud he is of them.

The life song was The Circle Of Life, maybe hinting he’s a changed man now as a Dad.

The Bitch Is Back

Bennie and the Jets

Candle in the Wind

Rocket Man (I Think It’s Going to Be a Long, Long Time)

I Guess That’s Why They Call It the Blues

Funeral for a Friend/Love Lies Bleeding

Sad Songs (Say So Much)

Don’t Let the Sun Go Down on Me

Are You Ready for Love