Saturday was a perfect summer’s day; not too hot and as the sun set the shadows from the lighting provided a magnificent backdrop in the distance.

Paris Wells (previously featured on Gigs ‘n Interviews) kicked off the Day On The Green including her chart-topper Let’s Get It Started. She said when she was a little girl she was a huge Whitney fan (what little girl wasn’t!) and then sung Amy Winehouse’s Back To Black.

Diesel came on around 6:30 dressed in his fine black vest and pants with his blue shirt, ready to rock for an hour. Over the years I’ve seen Diesel progress from an extremely shy human being to performing in front of thousands at Hanging Rock. At one point he joked with the thousands of people about fixing his tie. He delivered an amazing set as always including his some of his back catalogue from the past twenty-six years, but from his latest release Und 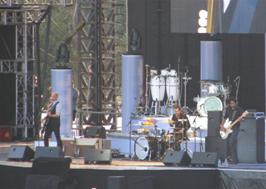 er The Influence he, Richie (bass) and Lee (drums) they did Hendrix’s Wind Cries Mary and I bet Diesel would have wondered if that was a little taste like Hendrix had at Woodstock.

Everybody’s Talkin’ At Me

Tip Of My Tongue

Rockin’ Rod came out at 8:30pm with his impressive band and backup singers. I have to admit my attention was taken by his pale yellow (almost pixy-like shoes). Then I looked up to see a burnt orange jacket. My thoughts included “and you’ve fathered seven kids!”

The atmosphere basically was like one like big sing-along all night! Rod sang songs which he released in 1971 (Maggie May) to 2009 (Love Train) and two hours worth in between. 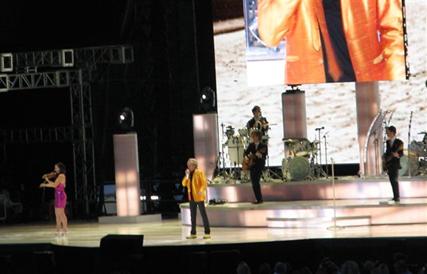 Many songs became a huge sing-along and even everyone out-sung Rod! One occasion was Tonight’s The Night from 1976. You know when some particular songs are gender favourites (and most times you can hear the women more)? Not with The First Cut Is The Deepest! There are obviously a lot of hurt men out there who totally relate to this song.

Rod made a point of bringing his guitarist down with him because before getting to Australia he severely injured his hand and has twenty-five stitches in it, but still was here.

A beautiful moment of the night was when Rod (the proud father and grandfather) showed photos of his family. His one year-old son celebrated his birthday in Sydney on Thursday. He was so proud of his seventeen year-old son playing for Britain in ice hockey. Then he showed his family all in Celtic United ice hockey jumpers.

He definitely had many suit changes throughout the night! The next one would be pink! For the start of Downtown Train Rod, the 67 year-old, got onto one knee and serenade the ladies! If that wasn’t enough, he sung Have You Told You Lately after that.

Other favourites were You Wear It Well, Rhythm Of My Heart, Hot Legs, Someone like you, Stay With Me (especially requested by Michael Gudinski and Rod said he and the band didn’t rehearse it so it “could be a complete fuck up! ), Do You Think I’m Sexy and Sailing.

Unbelievably Rod’s voice is same; it was only towards the end of the night it disappeared a little due to the night’s air.

Unplugged set:
Have I Told You Lately

You Wear It Well