Jacqui James Leave a Comment on The Superstar Jon Stevens 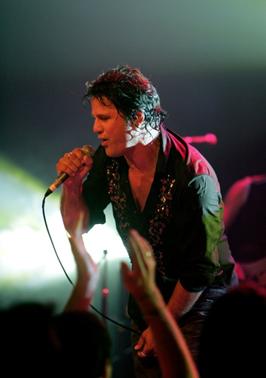 JON STEVENS IS one of the finest singers/songwriters/performers, not only in Australia but internationally!

Since launching his music career as the lead vocalist for the awesome Aussie rockband Noiseworks in 1986, Jon has become a versatile artist who has sang to billions around the globe at the 2000 Sydney Olympics as well as playing Judas Iscariot in the Australian version of Jesus Christ Superstar.

In 2011Jon has changed to Ralph Carr Management and is getting ready to release a new solo album called Changing Times. He has recently done a few gigs with his old buddies Noiseworks as well as continuing with solo shows around Australia and even one upcoming in Thailand.

I felt very lucky to do this interview with Jon, especially with all his projects and gigs happening at the moment. Thanks to Ralph Carr Management for their help.

You must be thrilled to be signed with Ralph Carr Management for the next chapter of your career. Are we going to see a different side of Jon Stevens?

Maybe not so much a different side – when you’re as old as me you’re not trying to reinvent the wheel.  Working with Ralph and his team is definitely exciting for me, considering the long time respect I’ve had for what he does as a manager of artists.

For the next four months you’re doing many gigs, even one in Thailand. Is this what you enjoy most, touring to all kinds of places?

Yeah, I love travelling.  I love meeting new people and I love sharing the gift of music.

Your acoustic gigs have always stuck out in my mind as the best I’ve seen. Why do you think you’re respected so much as a live performer?

Well, thank you!  When you’re performing live you give the audience a true sense of your energy and the passion and your commitment.  For me, every performance is like my last performance … there’s no pretending up there.  Plus it’s fun!  You can’t take it all too seriously.  Life is too short.

In this house we love the song R.I.P Millie, the song you wrote for your Mum and seeing you perform it live just was wonderful. How do you sing it time and time again? It clearly makes you emotional eh?

I don’t sing it time and time again. I sing it sometimes, purely depending upon how I feel.

Not dwelling on the past, but I’ve been curious for years about the rumors about Noiseworks rejoining and making another album. Were those true? Are you guys still planning an album?

Yes we are, and we have some absolutely fantastic new songs and we’re all extremely excited about finishing an album sometime this year, then spending 2012 focusing on Noiseworks and getting the new material out there.

You had major heart surgery a couple of years ago. Do you think you perceive things with better clarity as a songwriter better since having that experience?

I think that experience is certainly reflected on my new album, Changing Times.   Has it changed me?  Absolutely!  For sure … It makes you appreciate the people around you, and you don’t ever take them or what you have in life for granted.

I’ve heard you’re writing for an album. How’s that going?

It’s finished.  The new album’s called Changing Times and it will be coming within the next couple of months.

You sang at the 2000 Olympics Opening Ceremony as INXS’ lead singer, which had 2.4 billion viewers! How does that compare to having had a role in the highly successful Andrew Llyod Webber musical Jesus Christ Superstar?

Completely different, but both were surreal events to be involved in.  To be honest, it’s all just a blur now.  In both situations, you just hope you don’t make an idiot of yourself!

What are you looking forward to in the future?

Clean air!  I look forward to keeping on breathing and keeping my chin up.

If you can say anything to your fans, what would it be?

Thanks again Jon for your precious time. I’m really looking forward to the release of Changing Times.

Jon has a new website in the making: http://www.jonstevens.com.au/ so everyone keep your eyes out for it!