THERE’S NO DOUBT that Human Nature are the perfect definition of a success story! Within their twenty-five years together, they have had quadruple-platinum selling albums here in Australia and two successful long-running Motown shows at two Las Vegas venues! But Andrew, Mike, Phil and Toby have never lost their Aussie laid-back and humble attitudes.

The lads have just enjoyed time in Australia with the release of Jukebox, which has received lots of exposure with appearances on Sunrise and Dancing With The Stars Australia.

Jukebox is a collection of ’50’s and ’60’s classic pop and Motown songs handpicked by the guys. “These tracks include Unchained Melody, Under The Boardwalk, Wonderful World, Stand By Me and Little Bitty Pretty One. The album is actually one of the least produced sounding albums around, which takes the listener back in time.

“We wanted to record this album just to have a chance to approach those classic songs of the jukebox era of the ’50’s and ’60’s,” explains Toby. “They’re such iconic songs that had a whole lot of harmony in them and they’re actually songs that had a really big influence on us when we were first starting out.”

I have been extremely excited to bring you this interview with the guys of Human Nature. Thanks very much to Flourish Public Relations for giving me this amazing opportunity!

G’day guys! Thanks so much for taking the time out to chat to me! Welcome back to Oz! When you land in Australia, do you sigh with joy about being home?

We definitely do! Things are going great over in the States but there is so much about Australia that we miss while living there. Often it’s just the little things, like getting good coffee or fresh Aussie fruit or the chocolates we grew up loving, but it’s also seeing family and friends. There is nothing quite like coming home. 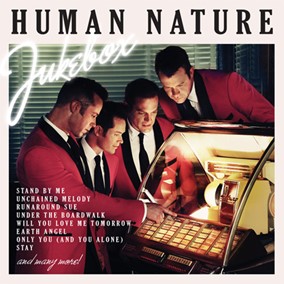 Of course you’re back celebrating the release of your 11th studio album Jukebox which is a collection of hits from the 50’s and 60’s. The album sounds great by the way! What approach did you have with recording Jukebox?

We really wanted to make sure we weren’t just remaking the old songs with this album. We wanted to bring a fresh take to each one, so with our producer Dave Pierce and executive producer Bob Rock, we went about stripping the songs right back to their base elements and then rebuilding them. We think with this approach we’ve really kept the best bits of each song but have also added some great new parts of our own.

After all your success in Vegas, is recording a studio album easier now? Do you have live takes which are perfect?

Sometimes the “match fitness” of doing our own show five nights a week in Vegas can be a good thing and help you to have a nice strong voice in the studio, but often it can go the other way and you can feel a little worn out. The trick is to find the balance! As for perfect takes – it depends what you mean by “perfect”.

Some takes may not be exactly in tune but might have a fantastic feel, and these could be considered just as perfect as one totally in tune. It depends what you’re looking for!

Speaking of American crowds, when my family and I saw you in Vegas in 2009 I was really surprised with how much the Americans respected you! Was this something which surprise you?

This definitely surprised us at first, because Australian audiences are quite “possessive” when it comes to their favourite Australian music (an example would be how Cold Chisel fans would react to a cover of Khe Sahn – quite badly I would think!), but we have found American crowds are much more open to acts recording their favourite songs. Their attitude is more “let’s see how it sounds”. It’s a pleasant surprise for sure.

I think I know the answer to this one but who’s the most likely to be mischievous onstage? Toby?

Which song would be your all-time favourite to sing together?

The first song we ever sang together was Earth Angel, and we have now recorded a version for our new Jukebox album, so that’s a real favourite. Another of our early songs (and one we still sing every night in Vegas) is People Get Ready. I think as far as a favourite it would be a toss-up between those two.

Can you remember the moment when you found out Smokey Robinson knew about you and then endorsed you?

We knew Smokey was recording his parts for our duet on the third Motown record in an LA studio, so we decided to surprise him with a visit. He had listened to our two earlier Motown records and liked them which is why he agreed to the duet, but he’d never heard us “live”. We sang a cappella for him and he absolutely loved it. That was a fantastic moment! About a year later we were performing in Atlantic City and Smokey came to see us. It was then that he offered to endorse us because he loved the show so much. It’s amazing to have a legend like him on our side! 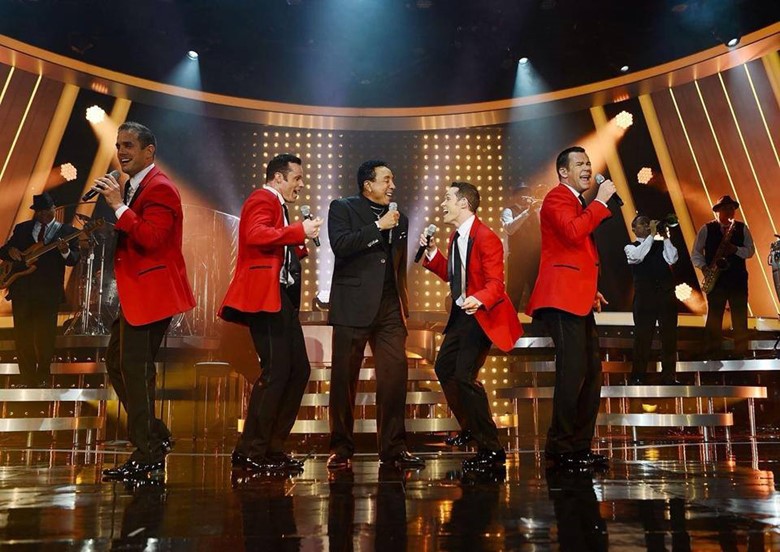 Twist And Shout is always a crowd pleaser! I remember when Bon Jovi have done it many times at their concerts, and at Bruce Springsteen’s Melbourne concert this year the song went on and on and on for fifteen minutes! Will you guys be competing with that?

Wow! Fifteen minutes. That’s a MASSIVE version of the song! We might give it our best shot. Maybe if we can at least get to ten it will be close enough?

Next year you’re coming back to do arena shows! What can your fans expect at your shows next year?

Our shows are going to be so much fun next year! Not only do we have this amazing new record of songs to choose from, but we will have also just celebrated 25 years together as a group, so we will be performing songs from our entire career. I think there’ll be lots of favourites and maybe even a few surprises…

With all your successes, is there one thing you still think “woah” about?

It’s still so cool to us that after twenty-five years and twelve albums we are still able to come home to Australia, release records and put on shows, and still have the most incredibly loyal and supportive fans come out and enjoy the music and the fun. It blows us away that we have always had the best fans in the world!

Thankyou very much Toby, Phil, Andrew and Michael for your time! I realise how busy you must be, so I really appreciate you doing this interview!