IF YOU START LISTENING to an artist and you begin smiling, the artist is doing their job! Damien Leith is one of those artists who achieves this because his humility radiates through with whatever he does.

Whether if that’s doing justi 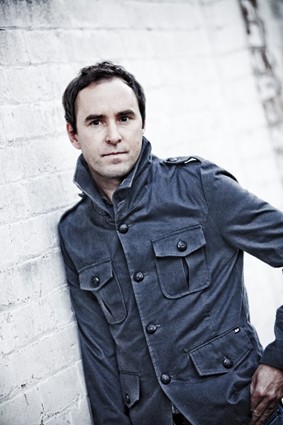 ce to his idols, writing two novels (with another one on the way) and a newspaper fortnightly column for The Punch or doing Dancing With The Stars in 2011, Damien always comes across as the-guy-nextdoor who just happens to be an amazing singer/songwriter and author (and most importantly a family man). If you would like to buy one of Damien’s novels Remember June and One More Time, please visit www.damienleith.com.

In the meantime while he has kept himself busy with the above, Damien released Now And Then which is a collection of originals including the gorgeous Beautiful (that Estee Lauder picked up for their global campaign) and his take on his idols’ classics such as Traveling Wilburys and the band’s members’ classics including End Of The Line, Here Comes The Sun, I Won’t Back Down and a whole spin on I’ll Be Your Baby Tonight.

Damien is about to do some shows around the country because he’s releasing Chapter Seven due out November 1st (please see below for the dates and details about his upcoming tour.) In my three and half years as a professional music journalist I’ve been very fortunate to interview some genuinely nice people and I’m glad to add Damien to one of them.

It’s a great pleasure to interview one of the nicest guys in the Aussie music industry… Welcome Damien Leith! WOW… I didn’t know you’re a fellow author of two with your third on the way AND you write a fortnightly column! What got you into writing? Have you always wanted to write novels?

Hey there. Lovely to chat with you. Believe it or not, writing is what got me into singing. I used to write and act in my own plays which eventually led to acting in musicals and singing. I loved writing from the moment I wrote my first piece and finishing a novel became one of my biggest goals. I wrote One More Time while trekking through Nepal and Remember June about two years later. I find writing a great way of relaxing for me and when I can’t sleep, it’s an especially good distraction.

You enjoy and have had multi-platinum albums doing covers as well as originals. You say “Writing originals is important as well doing justice to covers”. Is it equally as challenging writing great lyrics to doing covers of songs most people know?

Absolutely, many of the covers that I’ve worked on are absolute classics so it’s been really important for me to ensure that my original songs, lyrically and melodically are as strong as they possibly can be so they can stand alongside those giants. I find that the more honest I am with my lyrics, the better they’re constructed and that is exactly what I did with my new album, Chapter Seven.

I must say, when you do Traveling Wilburys and tracks from George, Roy, Tom and Bob originals it’s like you were meant to cover them because they sound so natural and great! What was the recording process like?

The recording process was actually very easy going. Many of the songs were songs I’d known or had sung for years so it was actually quite a joy to sit down and record them. Working on the Roy album was especially fun, in particular getting to work with so many great producers and of course the late Barbara Orbison.

With your music and novels does your Irish heritage play a big part?

Definitely music and literature is a huge part of Irish culture and heritage and I’ve no doubt it’s influenced what I’ve done. But I also spent many years travelling with my family and I think those years of experiencing different cultures really left a mark on me – it was a really inspirational time for me and I love travelling now.

About a month ago I heard your acoustic version of Daft Punk’s Get Lucky which was awesome by the way! Are you into some pop music or do you think it’s highly commercialised garbage? (I was going to say a word other than garbage… {winks})

{laughs} Pop music is a funny thing, one minute it absolutely infuriates me and then the next something surfaces and I go, now that’s cool! Overall I don’t mind any type of music– what’s tough is when the song you like the least is played non-stop high rotation – now that can wear you out!

How does having three gorgeous kiddies compare to being a past finalist of DWTS?

Ah nothing compares to my three babies – they’re everything to me. DWTS was a fun experience – hard work but I learnt a few steps that I can bust out at a party every now and then.

Speaking of your kiddies, they feature in your latest video Without A Fight. Was your daughter wrapped? Do they understand what their Daddy does?

Ah it was great having the kids in the video, it made the whole shoot so much more fun. The kids don’t care what my job is, I’m Daddy and that’s it. Even with the video, we just went about a normal day in the park and the director captured footage from a distance.

We’ve talked about what you’re good at so to balance it out, what are you bad at?

So many things but that’s top secret!

Thanks again Damien for doing this interview! I wish you the best of luck with whatever you challenge yourself next with!

Thanks a million Jacqui, all the best and we’ll chat again soon.
Damien