Jacqui James Leave a Comment on The Cool Dallas Frasca

DALLAS FRASCA IS ONE
very cool chick! With her always changing hair colour and down-to-earth nature, she’s very likable. She’s not like other artists and she’s proud of this. 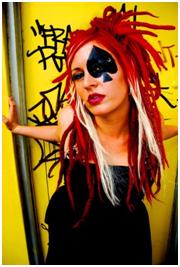 Dallas writes songs tell it straight! With her powerful voice, all she needs is her stompboard and guitar. My family and I were fortunate enough to see Dallas perform at the Rutherglen Day On The Green festival back in 2008 and she definitely left an impression on us.

I have been very excited to bring you all my interview with Dallas, so here it is:

Before getting nodules in your throat at the age of 18, did you ever think about picking up a guitar?

Before my throat nodules, I dabbled very badly with about three chords on the guitar, (although I think deep down I’ve always wanted to be a guitar rock goddess… don’t we all?) but not being able to sing for almost 18 months forced me to teach myself how to play and most importantly have another force of expressive outlet.

How did you get into using stomp boards and other
unusual instruments?

It was a chance to expand my sound with texture inspired by the delta Mississippi blues sound of the 1920’s (as well as not having to pay a drummer at the time! haha) I love the true heartfelt sound and whine of old guitars playing, that’s why I chose a steel bodied tri-cone when I bought my guitar. They were originally built when there was no power to kept up with the volume of the rest of the band. It’s a beautiful instrument and my guitarist, Jeff Curran plays a 1935, Australia made dobro that we just recently found out that Chad Morgan used to own once.

Winning the Triple J Light Your Fuse competition helped you immensely. How many competitions had you entered before that?

I originally put together a four track E.P to apply for a grant that I recorded over a hot summers night for a slab of beer with a mate. That’s the first comp I have entered and ended up winning (Triple J’s ‘Light Your Fuse’ competition) over 500 entries which lead us to perform at Blues Fest in Byron Bay over Easter in 2006 and give us a taste of something that we hadn’t had before. We are now junkies for it…. I think I may have entered one comp since then, maybe I should enter some more!

Are you excited about getting to play in Canada again? Are Canadians really like Australians?

Canada is like our sister country, our humour and music taste is so similar, we totally get one another. I have quite a few Canadian friends so I’ve wanted to go since I was a kid, so when we were chosen as one of seven artists from the seven continents of the planet to represent Australia for International Earth Day in Montreal, we were over the moon and was our chance to explore that part of the world and share our music with brand new audiences. We cannot wait to go back!

What has your favourite festival you’ve performed at so far?

With a few favourites like, Falls Fest, Apollo Bay and Pyramid Rock Festival, I would have to say that closing the Cognac festival in France in July this year was like no other gig we’ve done before, our audience was chanting for nearly ten minutes after we walked off stage after our last show and I walked away meeting Mr BB King himself! We had the surreal experience of paparazzi waiting for us to arise from our motel room every morning and we were submersed and overwhelmed with the wonderful European culture. We’re truly looking forward to heading back to Europe to tour early next year.

How was it working with Xavier Rudd on My Own Eyes?

Xavier and my band mates went on a hike through Noosa national park in Queensland during his national tour last year when we were supporting and he brought up that he had reworked a Mavis Staples song, ‘My Own Eyes’ and invited me to sing with him on stage during the tour. His version is so powerful with such an important message; it was an honour to sing on the track with him. In return, Xavier played guitar on one of my tracks on the album called, Strong Man…. (The ole barter system is still strong today!)

What do you think of other female singers/songwriters of today? Do you think there’s a struggle to be noticed with all the Britney Spears in the world?

Each to their own really, I do think the world would be a better place if it wasn’t bombarded with over produced, T & A crap. The soul has been squeezed out of most music these days and I think Australian radio in general should get behind and support, develop and nurture more of their own artists instead of being overridden with the international trash that is taking up most of our market place.

There are some truly talented incredible woman within the Australian music industry that will blow you out of the water, they are just hard to find amongst the leaves. I wish for kids sakes that these artists were the ones on TV and radio airtime, what a soulful place it would be…. But there will always be pop but the good music will always shine through… That’s if you look hard enough.

Not in all cases, but sometimes I get truly disappointed by women (and their record companies) exploiting themselves to hide the fact that they have no talent…. Come on girls… Dare to be different!

Where do you get your passion from?

I happened to meet an intriguing Botanist after a show on who said that that there are some people with talent and there are some people with ambition, drive and talent. I think that I have been naturally ambitious with everything that I have been involved with.
I am addicted to the lifestyle of touring on the road, the music, the people, the travel, being

musician is like no other job on the planet, I’ll do almost whatever it takes (well not anything) to broaden what we do in regards learning about songwriting, being open to always learning about music and doing those sometimes dodgy shows we all have to do as it’s a long way to the top! I just love it!


What do you think of the state of the Australian music industry?

Like I said above, Australia Radio needs to support more of our own artists for it to be viable for a sustainable future as a musician. If they don’t, what will be left is Beyonce, Pink, Nickleback and all the rest of that crap…. Fans should get behind all of their favourite artists/bands and see what they can do to help to. I also think that if more bands work together a little more, we will have a much more thriving industry to be a part of. But aside from all of that it’s a fun, vibing and one of the best workplaces ever to be in!

What is in the future for Dallas Frasca?

The Australian festival circuit over summer, songwriting for the next album, a three month tour of Europe again next year with our sites on Canada and Japan for next year as well…

I wish to thank Dallas for taking time out from touring to answer these questions whole heartedly! Also a big thanks to Steven Stavrakis from Shiny Entertainment for making this interview possible. You can visit Dallas Frasca’s Myspace at