Jacqui James 3 Comments on The Cheeky Charmer of Ronan Keating

ANYONE WHO KNOWS ME, knew how excited I was about this gig, so it’s the perfect first “gig” review to appear on Gigs ‘n Interviews for 2012. 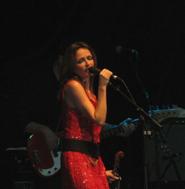 Two Irish singers/songwriters on the same night was a treat. Sharon Corr (who was of course part of the 90’s/really early 00’s majorly successful band The Corrs) looked stunning in a red, one shoulder dress. Not only doing songs (including instrumentals) from The Corrs days such as Ears Painted On, Radio, So Young and Dreams (Fleetwood Mac Cover, she treated us with a taste of tracks from her upcoming new album; one called Edge Of Nowhere.

Sharon recalled touring Australia and how much “They {The Corrs} loved it!” She said “{She’d} be back soon!”

Now onto the cheeky and charming Ronan Keating! There’s no point in arguing he’s definitely become an honouree Aussie over the past four years so he’s obviously feeling right at home. He said he love Sydney and Melbourne especially riding down Chapel Street and the Yarra.

Ronan came out dressed in a black suit and white shirt, with a nine piece band including a string section from the Sydney Symphony. The collaboration sounded and looked amazing.

Believe Again was his first song of the night from his Australian/New Zealand only release. He was full of energy and enjoyed himself all night.

Doing ballads, his smooth voice and believability goes up a notch. How You Make Me Feel, If Tomorrow Never Comes and Boyzone’s Separate Cars, a touching tribute to Stephen Gateley clearly moved the crow. 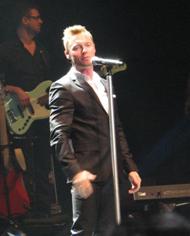 The honouree even done lead role in an Australian movie called Goddess which will be released this year. Last night the audience got a sneak peak of the movie and the song from it. One of the popular scenes received a huge reaction from his female fans. This was of course when he (his character) was bare chested laying in bed. A cheeky grin came over Ronan’s face.

As well as the movie, Ronan has a new single and album coming out. Also he’s excited about finding the next X Factor Australia winner this year! He joked about Reece Mastin and “that other bloke who won,” but went on saying he still believes in him.

After a rocking encore with everyone standing up which included Elvis Costello’s Pump It Up and Rollercoaster he thanked the crowd. When the nine piece band formed a line, they did a little Irish jig while laughing before leaving the stage.

The Setlist from last night was:

Pump It Up
One More Song
Rollercoaster