WHEN I HEARD a Melbourne band singing their so-good-gritty-bluesy track Pain And Misery on Melbourne’s Triple M morning radio show in May, I knew I HAD to interview them. Then Thor himself (aka Chris Hemsworth) plugged Pain And Misery on Instagram. Like Chris, Australia fell in love with The Tesky Brothers! 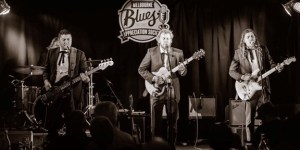 Appearing on Triple M was the beginning of a whirlwind for Josh (lead vocals, rhythm guitar, harmonica) and Sam Tesky (lead guitar, backing vocals) alongside their life-long mates Brendon (bass and backing vocals) and Liam Gough (drums, backing vocals). Half Mile Harvest landed on the ARIA album chart at Number 18 and took out the Number ONE on the Australian Independent Release chart the following week!

So what does Half Mile Harvest sound like? Together The Tesky Brothers have created a debut album full of tunes that could be mistaken for tracks that were recorded in America’s deep-south, but were in fact recorded in their Melbourne home studio. 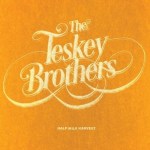 While listening to Half Mile Harvest, I was transported to a house in the Mount Dandenongs (a forestry place in Melbourne’s scenic rangers) or a pub where the lads were jamming away. Their stand-out track Honeymoon is eleven minutes and forty-four seconds of mood-altering music which goes from a dreamy pace to a jamming section to a quicker pace to an uncertain ending. Shiny Moon is a gorgeous track bringing back childhood and teenage memories. It has the lyrics “she seduces me” and “shiny moon gonna help me” that grabbed onto my heart as it’s a gorgeous notion.

Anyway, I was extremely lucky to have a chat with Brendon from the band. As you will read, along with being talented, The Tesky Brothers are brilliant, proficient and down-to-earth bunch of guys.

Congratulations guys for your recent whirlwind success! Hearing Pain And Misery live on Melbourne’s Triple M’s Breakfast Show, like millions of Aussies I fell in love with your sound.

Thanks Jacqui, we’re glad you like it. You described it well because it certainly feels like a whirlwind. The past few weeks have been crazy. We are really thankful.

{We} have been playing from around 2005 but we have all grown up together playing music and jamming together in our hometown of Warrandyte. Josh and Sam started busking at St. Andrews market while doing local gigs and open mics. I would join in occasionally and started my own band with Liam in high school. Eventually we all joined forces and have been playing together since. We started out playing covers of our favourite artists and have probably played just about every venue in Victoria.

Listening to your album Half Mile Harvest on Spotify was an experience of escapism from this often hectic world. It took me to a bar or a house where you guys were jamming away, especially in Honeymoon. Firstly, where did those lyrics in Honeymoon come from?

Honeymoon was written by Sam Teskey. He had the lyrics and most of the song together. He brought it to the studio one day and we began work on it immediately. The song became sort of a representation of the album as a whole in terms of themes and emotion. After we came up with the arrangement together, we tracked the whole song as a band together live in a room and what you hear on the album is the result.

The first part of the song is very mellow and bluesy and is about the battles of a long-term relationship once the honeymoon period is over. The second part of the song is a big rock out section and is a cathartic release of anger and frustration. Finally the third part of the song is sort of mediation and a resignation/acceptance of circumstances you cannot change and finding new ways to love each other.

It was the perfect song to end the album with, to get it all out and start fresh on the next project.

The sound of the recording of Half Mile Harvest is so authentic and crystal clear. Where do you record your music?

We recorded Half Mile Harvest at our home studio in Warrandyte. Half Mile Harvest refers to the two-inch tape we used to record, which is roughly half a mile long.  The entire album is recorded and mixed using analogue techniques with no computers. This was a very deliberate decision as it is the only way to achieve the warm authentic sound we were trying to emulate from our favourite soul records of the 60’s and 70’s. We also wanted something that accurately represented how we sound live, so recording live to tape was essential. The album is produced by Sam Teskey and myself (Brendon Love) and was mixed and engineered by Sam Teskey. 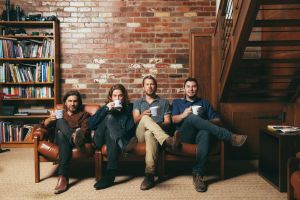 Your bluesy type of music is awesome and reminds me of our Diesel and old artists like Otis Redding. I bet you guys have an impressive vinyl collection? Who’s your favourite artists?

We all grew up listening to a lot of blues and soul; it probably had a lot to do with how we all became friends initially.  We would have these late-night jam sessions in Josh’s bungalow down the back of his parents’ property and we would be covering Otis Redding, B.B king, Bill Whithers, Jimi Hendrix and all the blues and soul greats. We each bring our own set of influences to the band but we all have a common love for blues and soul. Sam loves Peter Green and early Fleetwood Mac, and is very inspired by David Gilmour and Jimi Hendrix. Josh obviously grew up listening to Otis Redding, Donny Hathaway, B.B and Freddy King. Liam always liked the more rock oriented music of the 70’s like Led Zepplin and The Kinks and I have always loved Sam Cooke, Marvin Gaye and early Motown. There is literally too many to mention but there is a few.

Are you looking forward to heading out on the road?

This is the first time we have toured as a band outside of Victoria, we are having a great time. We are all best friends and have spent endless camping trips and travelled together so this is the perfect way to blend those two things. It’s also nice to play in front of audiences that don’t necessarily know who we are or what we do. It’s a humbling experience and is exciting for us to share our music with new audiences and hopefully make some new friends and fans that come back and see us on our headline tour in July.

Thanks very much for your time Sam, Brendon, Liam and Josh!

To catch The Tesky Brothers on the road, here are their tour dates: