JOSH PYKE IS one of those of singers/songwriters who loves when his lyrics can mean something completely different from one person to the next. To me, this is a sign of a selfless artist who writes for their fans and the wider community.

Josh has made a really cruisey but flavoursome album, featuring stellar song writing and beautiful arrangements. Those arrangements range from the strings and chimes of ‘Book of Revelations’ to the acoustic guitar and quiet banjo on ‘Momentary Glow’ to the intense organ in ‘There’s a Line’, maybe symbolising our panicking daily thoughts. “But All These Shrinking Hearts” especially appeals to people who are in their thirty-somethings as the album is filled with nostalgic-rich lyrics which bring back memories from our childhood.

For my 200th interview on Gigs ‘n Interviews, it was a huge privilege to have a chat to such a singer/songwriter like Josh! He’s invested in peoples’ struggles and everyday life and is glad his songs speak for people dealing with sadness, love, heartache and pure joy.

G’day Josh! How are you? It was a real joy listening to “But For All These Shrinking Hearts” as it seemed you put a lot of love into your lyrics on this album. How long did the writing process take you?

I started writing this one whilst I was touring the last album. So I suppose realistically it took about eighteen months to write the songs and demo them to the level of showing them to my label and manager. I find writing on the road pretty inspiring so it was a good productive place to be.

“But For All These Shrinking Hearts” was recorded in your backyard! Before I knew this, I thought the album had this organic, homely sound which shone through. Did you plan to make an album provoking such emotions?

I recorded all the demos in my studio at home but the final versions were recorded in Sony and Alberts studios in Sydney. We built upon the demos tracks so there’s definitely still those elements in there. I just follow my nose when I’m recording. I don’t try to make anything particularly polished, I just want things to feel good.

Did you play most of the instruments on the album?

I dabbled in everything for sure. I play drums on one track, bass on almost all of them, and obviously guitars and piano on songs as well. John castle (who produced the record) also plays heaps of instruments so his work is all over the album too.

I adored the track “Be Your Boy” which has the gorgeous lyric “splitting this drink from the bottle“. It’s such a nostalgic-rich track and I think most Aussies could relate to such memories! Is “Be Your Boy” based on your childhood? 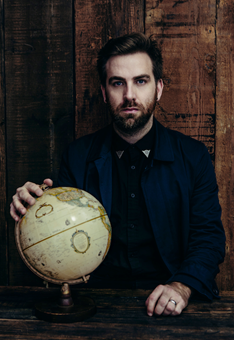 It’s based on that period of life between child hood and actual adult hood when you’re looking at responsibility and shirking it for the time being. It’s that great period when you could drink all night and chase your love around town and then go to work in the morning and be just fine!

It seemed  you tackled the issue of mental illness in “Song Lines”. The line “sing your way back home” is very touching. What prompted you to write about such issues?

That’s an interesting interpretation. For me that song is not about mental illness, but more about the idea of passing on knowledge through music and using lessons learned to navigate your way across your life. Having said that I love the idea that different people have different interpretations, so I love that it’s about that for you.

Congratulations on SELLING OUT your fans-first shows! What have the response from your fans been?

I can honestly say this has been the best received album I’ve ever done! The response has been so overwhelmingly positive and enthusiastic, which is amazing after ten years. I’m very grateful.

You raised $50,000 for the Indigenous Literacy Foundation which is awesome! How did you get involved in this important project?

I got involved about seven years ago after my wife told me about them. I’d been passionate about the idea of bridging the gap but didn’t know how to help. When I found out about the ILF I was inspired to raise money for them because they do such a great quantifiable job at raising literacy levels in remote indigenous communities.

In your amazing career you have released various independent albums, won two Arias, nominated for several others, played overseas at festivals and you’re my age 37! What has been the highlight of your career so far?

It’s hard to name one, and I truly think the highlight is the simple fact that I’m doing this as my job!! I still pinch myself daily to see if it’s still true!

Are you planning to do a national tour to celebrate the release of “But For All These Shrinking Hearts”?

Absolutely! I’ll be doing one-off festivals for the rest of the year, but after that I’ll do a big tour in early 2016.

Thanks very much Josh for chatting with me! As I said before, I thoroughly enjoyed listening to “But For All These Shrinking Hearts” as I found the lyrics really poetic and realistic.