SHOTGUN MISTRESS is a group  of four Melbourne rockers with a powerful and timely message with their debut single No Friend Of Mine, raising awareness about domestic violence which sadly has become an epidemic both here and abroad  in recent years. 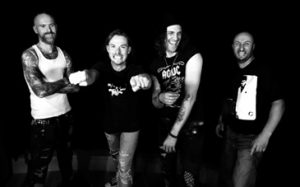 Just formed in 2018, Shotgun Mistress sound like a well-oiled rock band that have been around for years. Their music is pure rock with great guitar riffs by Matt Wilcock who has been named in the top hundred best guitarists in the WORLD by bestselling author Joel McIver (who wrote Justice For All: The Truth About Metallica.)

You can listen to a snippet to No Friend Of Mine and upcoming releases from their debut album due out late in 2019 HERE. Earlier in the year Glenn became a fan of Gigs ‘n Interviews, so it was an absolute pleasure to chat to him.

G’day Glenn! I applaud you, Matt, David and Lee on releasing your new single No Friend Of Mine, which tackles the extremely important issue of men’s attitudes towards women and domestic violence. What caused you to write about this issue?

First off thank you so much for all your support Jacqui and for the privilege of being a part of your blog. Well to be honest, it hits really close to home for us. So close in fact that Dave’s sister passed away as a result of domestic violence and without going into too much detail it’s probably the most essential topic we as a group could band together to try and bring awareness to this ever-growing epidemic. It’s something we’re really passionate about, trying to find any platform to keep it in the public eye is definitely a great way to start.

Shotgun Mistress just formed as a band last year but listening to No Friend Of Mine you guys sound like a well-oiled band of musos. How did you guys get together?

I’ve known Matt for years and lost touch with him about twelve years ago when he moved to Europe to tour with bigger metal bands. I recently found out he was back and looking for a singer for a rock band and I guess the rest is history.

We’ve all played together in some shape or form so as a collective it just made sense and we all gelled pretty much instantly.

Matt was named in the top world guitarists by the author Joel McIver who wrote the bestselling Justice For All: The Truth About Metallica. That’s a big deal! How can most of Australia not know this?

Matt’s spent the majority of his life playing and touring in heavy metal bands and also lived in the UK for ten years. Maybe in certain circles his achievements in that genre are a bit more well-known but probably not so much in Australia.

I like how you’re appealing to most Aussie blokes by making good “Aussie rock” such as No Friend Of Mine. Was this a conscious effort to try to break through barriers?

We’re just playing what we’re passionate about. Loud, exciting, energetic rock music. We don’t necessarily think too much about breaking through barriers or get too “deep” musically, we just focus on trying to make what we create the best that it can be.

Shotgun Mistress have their debut album due to be released in November. What can we expect on it?

It’s going to be a cracker of an album. We’re heading into the studio with an abundance of material so when we whittle it down to an album’s worth of songs, it’ll wind up being a really solid rock album. We can’t wait to get started recording. It’ll be Something that will force you to crank the volume up.

Thanks so much Glenn for reaching out and supporting Gigs ‘n Interviews. Thanks for taking the time answering my questions. I wish you the best of luck with Shotgun Mistress’ future.