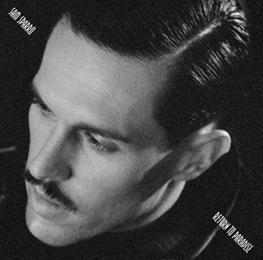 SAM SPARRO’S NEW album Return To Paradise is released TOMORROW (June 1st in Australia) and he’s so proud of it! He made the conscious effort to go back to his gospel days and introduced instruments such as horns to make Return To Paradise as raw as it could be!

Why did it take Sam so long to release his follow-up 2008 self-titled album? He wanted quality! He wanted to make music the way he wanted to! Also now he admits “there were many awkward years where I felt very insecure and uncomfortable in my skin. I still have my days but I feel happy to be me.”

Sam now mainly lives in LA now but most people wouldn’t know his debut single Black and Gold went into the top 20 in fourteen countries, and from radio play he received a record deal from Island Records!

I define Sam as true artist through and through as he this uniqueness that makes him looks so cool and natural. He’s had his own artistic input in his recent videos which also stamps his uniqueness to his music.

It was a real privilege to interview Sam, especially upon the release of Return To Paradise. So thankyou very much Sam for your time and also thankyou to Nicole Stringer from EMI!

Your second album Return To Paradise has taken you over two years to come to life Why did you take so long to make it?

I really wanted to take my time to make sure I made something quality. I also needed some time to live a bit and absorb some inspiration. It took longer than I expected it to but looking back I’m glad it unfolded the way it did.

You believe you’re a better and confident songwriter now. What do you put this down to?

I think being older and wiser – less inhibited – more willing to trust my own instincts and less worried about what other people think.

Also you say you’ve left tracks bit raw and not completely polished. Is this being more confident in
yourself?

Partly – but mostly it’s a rebellion agains the current state of pop music which I find to be grossly over processed and quite hu man-less.

When your debut single Black and Gold went into the top 20 in fourteen countries, could you believe it?

I had always had a really great feeling about that song but I didn’t expect it to explode quite as quickly as it did.

What do you really miss about Australia now that you’re spending most of your time in LA?

I miss my friends there and the beach. The beaches in LA are pretty dirty.

You’re what I define as a true artist through and through. You have this uniqueness that makes you look so cool. Have you always been comfortable in your skin?

Thank you. I think I’ve always been willing to take risks but there were many awkward years where I felt very insecure and uncomfortable in my skin. I still have my days but I feel happy to be me.

You have music running through your family tree as your grandfather was a celebrated Jazz musician,
your Dad as a gospel singer and recording artist, mother an organ player and his brother a professional guitarist. Do you think your destiny was music?

I do. I love music and it’s such an important part of my life and the history of my family. I always knew I would be a singer. The musical roots are deep on both sides of my family tree.

Many people wouldn’t know in 2008 you signed with Island Records which was a massive achievement
and the result was Black and Gold. How did you score this record deal?

Well actually it was the other way around. The record deal was a result of Black & Gold which was already being played on the radio before I even had an offer.

Your videos I Wish I Never Met You and Happiness are so artistic. Did you have any creative input into them?

I wrote the treatment for both of them. The treatment is what they call a script for a music video really. I had complete control over the entire video from the beginning straight through to the editing room – But it really was a collaboration with a lot of really talented people – Mike Rosenthal the director, great art departments and my stylist Michelle Tomaszewski, the dancers and actors. I love doing the visual side of things.

Are you planning an Aussie tour after Return To Paradise has been released?

Absolutely – I can’t wait to come back to do more live shows in Australia later this year. I will announce the dates as soon as possible.