Skip to Content
Home Reviews REVIEW: Tales In Space Have The Formula

Jacqui James Leave a Comment on REVIEW: Tales In Space Have The Formula

THE SYDNEY DUO Pieman and Luke Bert make up Tales In Space and they are about to introduce their unique genre of sounds when their debut album Formula to us earthlings on June 6th, 2014. 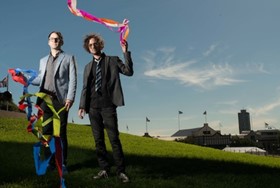 These two artists have made a concept album dealing with out-of-space, dreaming and reality; challenging how these things make us question and wonder. There’s no doubt they had decided to incorporate electronic sounds such as synthesised keyboards with intelligent lyrics.

The title track Formula is about in dreams we deal with reality and how we fight between the two. Then in the following track the upbeat Shades, the duo asks “Could it feel this good?” as in life in reality. Hollidaze has a really cool 60’s guitar lick, while the track takes you away to somewhere relaxing.

There’s no denying Tales In Space take off where Pink Floyd left off, but unlike Pink Floyd Pieman and Luke Bert are more pop influenced to have produced an enjoyable listen.

Formula is due out on June 6th through MGM.