IF YOU ARE in need for some rock without an apologic attitude, Brothers Grim & The Blue Murders are what just the doctor ordered!

BGTBM’s music is drenched with Aussie culture with a rockabilly bluesy infectious sound about tales that most Aussie males (who like a drink or two or three) could relate to. (that’s if they can remember night of drunkenness!) 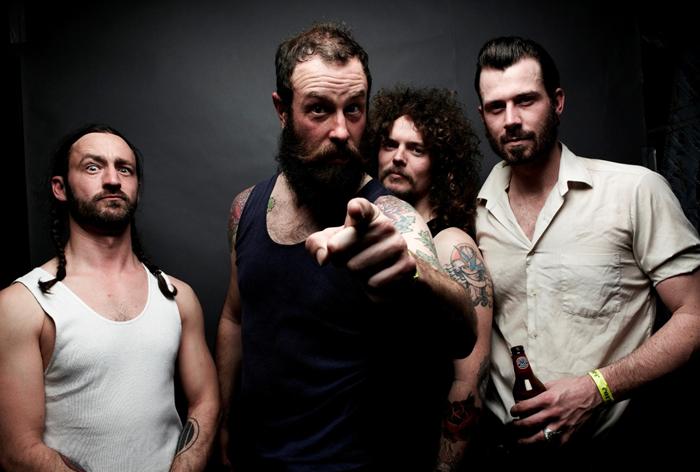 Their new seven track EP Roll It In along with their lively and anything-can-happen live performances are receiving lots of acclaim by Australian media royalty. 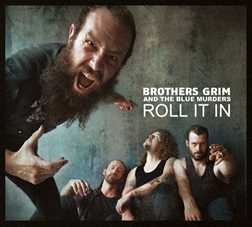 Here’s a few reviews from other media outlets:

“In the modern world of music, few things are as hard to create as something that is truly unique. Indeed, in a shrinking industry that is driven almost entirely by profits, being unique is often considered to be a risky move. Perhaps, then, that is why it is so refreshing to hear a band like Brothers Grim.”

“The four piece outfit were as tight as their stove pipes and sleek as their hair…Balancing effortless class with rock’n’roll filth…Front man James Grim was busy balancing on steel rails, gallivanting on the audiences’ shoulders and lapping up screaming girls fighting for his attention whilst carrying the show with his smooth vocal delivery.”

“The Roots of Rock writ large…”

Here’s their very infectious first single Been A While from their Roll It In EP (if you’re easily offended, you may want to skip watching it):

It is always a pleasure to do my job as a music journalist, but when I get someone as lovely as James (the lead vocalist of Brothers Grim & The Blue Murders) it’s extra special! So thanks James for devoting your time to answer my questions and thanks as always to Mel from Heapsaflash.

I have to applaud you guys for releasing Been A While which basically ignores all the polished political correctness rock out there! Is it fair to assume you guys don’t give a f… if you offend people?

Ha, I wouldn’t even know how to play polished politically correct rock if I tried! But the idea of music offending people does intrigue me…Miles Davis, Public Enemy and Rose Tattoo were all considered too offensive at some stage (if not all of their career) by someone – but all of them broke rules and revolutionised music and that sits well with me. Brothers Grim never set out to write offensive music – we simply write a record based on our emotion — good and bad — and our experiences good or bad. Then we attempt to drive that home with sincerity and clarity. If someone doesn’t like it – go listen to something you do.

Where does the name Brothers Grim And The Blue Murders come from?

My brother and I have been branded the Grim Brothers for years because we write about the darker sides of life and the [name] Blue Murders (our current band) came from a play on the fact that we write a dangerous version of the blues – blues that could kill you.

The video for Been A While is very clever and watchable. Whose idea was it to have those photos tell the story?

Jim Batt (film maker) and I got the idea from a party we went to last New Years. We spent the evening with Mojo Juju, Frankie Valentine and various riff raff from Melbourne and Sydney band and Burlesque scenes. Lillian Star had a Polaroid camera with her and people were taking photos all night. At around six in the morning all the photos were laid out on a table and it told the most amazing debaucherous story. Jim is an amazing stop motion artist so it seemed to be a clever way to make an interesting real life video with minimal locations. Video footage was in one small kitchen while the Polaroids were taken over five different states while on the road.

You’ve just done the heavily lined-up Blues and Roots Festival in WA! Was that a career highlight? Did you manage to see the legendary Robert Plant perform?

It was definitely a highlight. I like that Mr Plant isn’t attempting to rehash the Zeppelin thing; he’s just playing the music he wants to do now. I like that ‘please yourself first and the rest will follow and if they don’t screw em’ attitude. The best part of the fest though was when Iggy invited us to storm the stage with him! Age means nothing to that whole band…it was pure rock fury and it excites me even now thinking about how explosive they were!

I imagine your live shows are just mental! Can you pinpoint a highlight so far?

We try to make every show a highlight and bring something new to every one of them. If you’re in front of us we’ll give you a show better than the last one we did because it directly relates to you – immediate and live. It’s like a self-destructive illness we have. I could pinpoint moments like the many times I’ve jumped from one thing to another without ever hitting concrete or Dom slinging his double bass like a deranged lover or when Matt ran full force into my face with his guitar splitting my head open but these are just moments that make up the chaos of anyone of our shows.

“Call me greedy but I am not sure anything the group records could ever top a live performance. It’s certainly an EP worthy of owning, but take my advice, get to a live gig. You will probably end up drunk and pants less by the end, but this time you won’t regret it.”

“It was easy to imagine how mind-blowing this band must be on an open stage – they had Studio Five pumping like a fishbowl on steroids.”

“The band never falters in energy, enthusiasm and generally reminding the crowd that your hips are there for shaking.”

Was the video for On The Meter based on non-fictional events? {giggles}

The song is actually about a very real taxi ride that happened between a very good lady friend and I, we’d been drinking and dancing all night and things all of a sudden got out of hand when if we were thinking ahead they probably shouldn’t. So for the video we just plied all of our beautiful friends with liquor, threw them in the back of a cab with me and said, ‘See if you can distract me from singing.’ After the first take we had to go home and get me new clothes because the others had been torn off me.

Are you receiving lots of praise for your current 7 track EP Roll It In?

It’s been overwhelmingly good – it’s really nice to have people understand and support the hybrid bastard music you work so hard on.

“Everybody loves good time foot stomping swap rock and these guys are the Australian kings of it.”

– Tone Deaf review of Been A While

These are guys making music the way that they want, without regard for the masses. The good thing is though that I am more than happy to come along for the ride.

Thank you very much James for your time! Good luck with your future!

You can catch Brothers Grimm And The Blue Murders at one of these dates of their remaining tour: