ROD LAVER ARENA WAS transformed to present a spectacular event for Prince’s 360 stage which was the shape as his “symbol” in the centre with huge video screens from the roof. The outline of stage and lightening changed colour with the mood of each track. 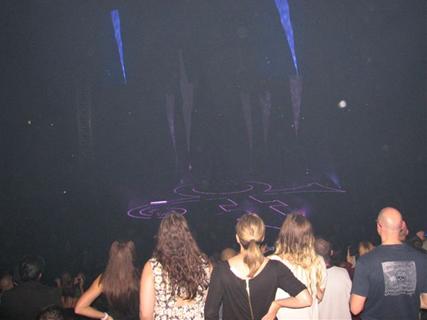 Last night was the first Melbourne concert; tonight he does it all again for another two hours plus.

The show started with the sound of thunder and blue lightning on the screens. One of Prince’s stunning dancers appeared and she walked towards his guitarist who was playing the introduction of Purple Rain which turned out to be a teaser of something to marvel at later on.

Prince rose from the centre of the stage and asked, “Melbourne, how long has it been?” I didn’t believe how charismatic and cheeky he is. He joked that he wrote his 90’s hit Cream, while looking in mirror.

We wouldn’t expect anything more than an unbelievable concert from the “purple one”. Sometimes he was a little self-indulgent, asking the crowd “What’s my name?” repeatedly and calling his music “real music”. However, this is Prince! He gets away with wearing platform shoes and still is cool.

He might be a little self-indulgent but man, is he an extremely talented artist! He’s an extraordinary guitarist who improvises with his magical guitar-made-hands. On his impressive keyboard he also did a medley of his chart-topping hits: When Doves Cry Nasty Girl (instrumental) and The Most Beautiful Girl in the World / Adore. He played a sample of Beyonce’s Single Ladies (Put A Ring On It)
and joked, “Wait, I didn’t write that!”

1999 got everyone up on their feet from its undated beginning. Prince obviously doesn’t like playing Little Red Corvette because he let the enthusiastic crowd sing the first verse but then leapt into Cream. 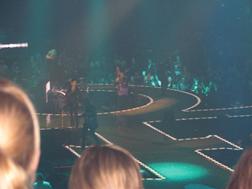 What a privilege seeing Prince and his band perform Purple Rain (the whole twelve plus minutes worth). It was totally amazing and awesome!

Most people thought Purple Rain was the last song of the night (including us) but when we were going doing in the lift we heard Prince and his band fire up again! But before he left the stage for the first time he said, “He isn’t afraid of the future and feels blessed.”

The setlist from last night was:

Song of the Heart

I Could Never Take the Place of Your Man / Jailhouse Rock

Take Me With You

Cool (incl. Don’t Stop ‘Til You Get Enough)

Sometimes It Snows in April

The Most Beautiful Girl in the World / Adore

Single Ladies (Put A Ring On It)

I Would Die For You

If I Was Your Girlfriend

She’s Always in My Hair