ALL I COULD WRITE for this review is WOW, WOW, WOW because there’s not enough adjectives in the dictionary to sum up the lavish show P!nk and her crew have created for her record breaking 18 Melbourne shows to celebrate The Truth About Love.

P!ink graced the stage at 9pm and for the next two solid hours she gave us a SHOW! Along with acrobatics, aerial stunts, props including a steel circular cage that dangled from above for P!nk and her dancers to climb around (with NO safety cords attached to them), fireworks, sensual choreographed dances and a several bungee surprises that gave us fans at the back a face-to-face experience with the supreme performer, P!nk definitely has raised the bar once again. 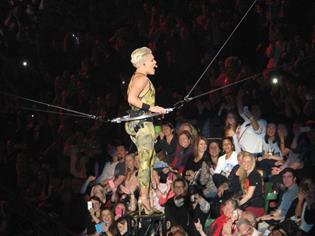 The Truth About Love concert itself contains raunchy choreography, including dancers dressed in leather and fishnet stockings, not shying away from the acceptance of peoples’ sexuality; maybe passively giving support to the gay marriage rights.

Besides all the extravaganza onstage (or in the air), P!nk’s down-to-earth nature (in other words: I-don’t-give-shit-what-people-think-of-me) attitude and gratitude shone brightly. She said, “Thank you thank you thank you thank you” pointing to people in the arena and then said, “Thank you for coming out…” She repeatedly accepted gifts for herself, her husband Corey and their little daughter Willow and made time to sign things for her fans. She absolutely loved pair of boxers an audience member gave to her which had the Australian flag on it! 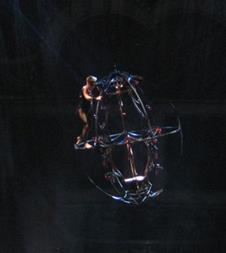 The show itself had a circus/theatre theme with a comedic instructor/host named Rupert. Even before P!nk came on, Rupert was in the stalls interacting with the audience, even rubbing and licking a bald man’s head! Rupert and the dancers made it so that you would often have a hard time deciding who and where to watch because everyone were so interesting to watch.

The fact that P!nk can sing upside down while doing twirls proves she’s a superwoman! There were a few times when you couldn’t help holding your breaths and sometimes gasping because she would suddenly do something. I believe P!ink is definitely the new queen of performers because there’s no-one doing what she is doing.

Besides training for her tours, last night P!ink revealed with every tour she likes learning how to play a new instrument. She has learned actually two instruments; some drums but more self-satisfying the piano. She asked the audience to look away so she wouldn’t make a mistake during Keep You Alive.

Two songs really stood out for their choreography. These were Try (think ballet between P!nk and a taut male dancer) and a Chris Isaak cover Wicked Games with several maledancers. Yep, eye candy for us ladies, but P!nk’s male fans didn’t miss out! They definitely got to see some raunchy moves between two female dancers!

On The Truth About Love tour, fans in every corner of the arena get their chance to see P!nk up close! It’s such a unique and clever concept involving a bungee contraption to can reach all four corners of the arena. I was so impressed with P!nk’s thinking outside the square to consider ALL of her audience.

After Pink and her entourage of talented musicians and dancers had left the stage, a behind-the-scenes video was shown which was lovely to watch.

The setlist from last night was: