NICK BARKER’S TALENTS HAVE been going under the radar since the 80’s when he was the front man for Nick Barker and The Reptiles. He has released seven (yes seven!!!!) solo albums, written for film and is an actor (although he jokes he’s not waiting to get a call from Hollywood). 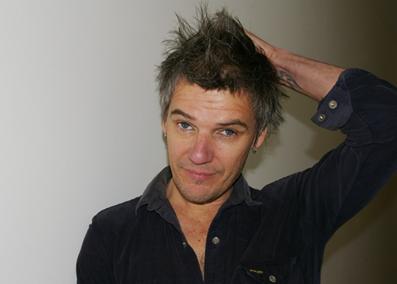 In March my friend invited me to see James Reyne at the gorgeous Morning Star Estate in Mornington and Nick Barker and The Reptiles were his support. I was so impressed with their set. Nick can pull off a true rock singer with his masculine, rocky, husky voice, but then the next tune in the set can be a pure country track and Nick pull it off perfectly.

For those who need a mindjog, Make Me Smile (Come Up and See Me) probably the most memorable hit Nick Barker and The Reptiles had in 1989:

Come up And See Me (Make Me Smile)

After seeing him back together with The Reptiles, I just had to interview Nick because he’s such a rockin’ dude, and what a pleasant experience that was! He didn’t involve his management or whatever, so he was very approachable which is very refreshing.

I saw you rejoin with The Reptiles at the Morning Star Estate a few months ago now. Had you guys been doing many gigs before that?

We reformed for last year’s Community cup footy game after twenty years! So that was the third, gig we’d done.

Watching Stonehearted on your Myspace and seeing you at the Morning Star Estate, I see you like to jam with your band. After all these years, was the connection with the guys in The Reptiles still there?

Yeah it is we are probably better players now and a lot less drunk.

Sunny’s Song is so true, so relatable! Do you realize you may have helped many adults who have that guilt from their parents separating?

Unfortunately all too many people relate to that song. I’ve had so many blokes come up to me with a tear in their eye thanking me for that song.

During your gigs, you can songs that are very country, but then leap into rock. Do you have a favourite genre to play?

A lot of people could be wondering what have done since the 80’s! So what have you been doing?

Reptiles finished in 1992 {and} since then I have made seven solo albums.

When you look back at the 80’s, what is the first thing that comes to mind?

You’re a man of all talents; you’re one of the great singer/songwriters in the country but also you’ve written for film as well as dabbling in acting! What’s the most enjoyable and the most challenging?

I’m blushing… Songwriting is my fall-back position acting was mainly dumb luck, I can act a bit but Australia is full of very fine actors, so I’m not holding my breath for the Hollywood phone call!!! I’ll just keep hackin’ away

You and Mark Thomas (from Weddings Parties Anything) have worked together on a few projects.

Mick Thomas!!! Yeah me and Mick have been good friends for a long time, He has been a real mentor to me… He’s so driven and produced my last album at his shed/studio.

Are you working on any projects?

I’m currently rehearsing for “Hell Ain’t A Bad Place to Be”, a narrated concert about the life of Bon Scott.

Will you continue gigging? I can totally visualise you doing Day On The Green!

Just asked ’em about Reptiles for the Meatloaf support!!!!!!!!!

A very huge thankyou to Nick for being so easy-going and for providing me with great answers! I’ll look forward to hopefully seeing you and The Reptiles at Day On The Green with Meatloaf!