Jacqui James 2 Comments on My Short Chat With Reece Mastin 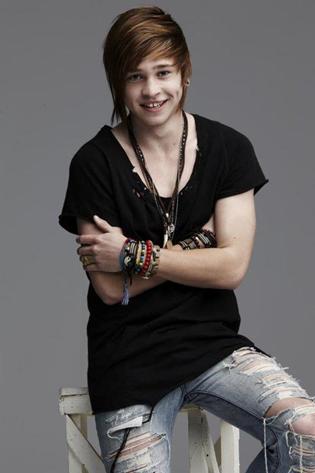 On December 9th his first single Good Night became available on iTunes which averaged one sale every 2.7 second for THE ENTIRE DAY on the Wednesday after its release it went Platinum. Then his debut self-titled album was released going Gold.

His debut album includes his take on chart-toppers including She Will Be Loved, Joker And The Thief, Paradise City and I Kissed A Girl, Breakeven and his first single, Good Night

But don’t think this teen will be Australia’s answer to Justin Bieber! Reece told Gigs ‘n Interviews that he has been writing since he was twelve. Viewers of X Factor would know that he likes to shake songs of his favourite artists/bands up and put his own thing to them.

So enjoy my chat with Reece which will be my last interview in 2011! Thanks Reece for your time and thankyou Nadia from Sony for your ongoing assistance.

When Luke read your name out from his card, do you remember what were your first thoughts? (it’s ok, you can swear.)

It was all a blur!

I bet hearing your new single Good Night on the radio the next day flipped you out?

Yes I never expected to hear myself on the radio.

How have you found recording your self-titled debut album?

I love {recording in the studio}!

You performed with Kylie for Petesakes looking so comfortable and you owned the stage! Happy birthday for the 24th of last month! You’re only young to most people. Has your loving Mum gave you the “stay grounded, remember your family” lecture yet?

Do you know where does your easiness and confidence come from?

I would have no idea but probably my love for music.

From your first performance everyone could see how you had that “X Factor”, but how young when you when you first started singing?

Areosmith – Crying and Love In An Elevator

Not many people would know you nearly went deaf when you were younger. Does your X Factor Winner 2011 crown make you and your family more proud of this achievement?

Hindsight is a wonderful thing. Do you have any regrets about anything that happened during X Factor?

Are you looking forward to starting to be a songwriter in the future?

I’ve been writing since I was 12, so there’s more to come.