ON SATURDAY NIGHT MELBOURNE definitely rocked for four hours as we travelled back to the 70’s/80’s with the Aussie band Choir Boys, the amazing Heart and the rockin’ Def Lepard as part of Def Leppard’s Mirror Ball Tour 2011. 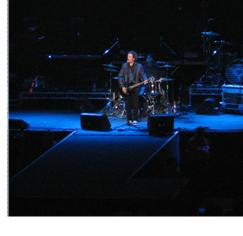 At 6:30pm the drummer of Choir Boys kicked off the night with a solo involving the audience. I must admit I didn’t know most of their songs, but appreciated the frontmanship of Mark Gable who got the crowd up on their feet. The band who is currently celebrating thirty years together performed their hits Boys Will Be Boys and their biggest Run To Paradise which was released in ’87. Mark said, “We’ve done a lot of tours but this one has been the best because of Heart and Def Lepard… {They} are lovely people.” 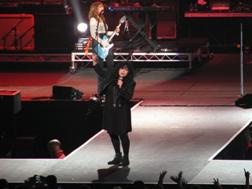 It was hard to believe it is the first time Heart had toured Australia ever and even more surprising when their bassist is Australian! Ann and Nancy Wilson’s voices are a match in heaven but they’re the ultimate rock chicks! I was totally awestruck with the power of Ann’s voice and this especially came out when they did What About Love, How Do I Get You Alone?, a rockin’ Crazy For You, Barracuda and a cover of “our” John Farnham’s You’re The Voice, which is impressive itself knowing they did their homework on Australia. Nancy took the lead vocals on These Dreams. ever before I have seen a support act come back out and do an encore after being onstage for over an hour, but Heart did then blew the roof off with a Who cover.

Before Def Lepard went onstage, ACDC’s For Those Who About To Rock (We Salute You) was cranked up over the arena. Later in the night Def Lepard’s frontman Joe Elliot and the rest of the band paid tribute to the great rock bands (even Bon Jovi who got the loudest cheer…and no I’m not kidding!) and artists and told how they opened for ACDC ’79 and got drunk with Jimmy Barnes.

The show Def Lepard put on was a time journey and they’re definitely not ashamed of their past at all! Behind the stage they had several video screens which often showed past video clips and photos (oh yes with their mullets!) One really odd thing I noticed was the fact Joe wore silver sparkly sneakers and his mic stand was all sparkly too. 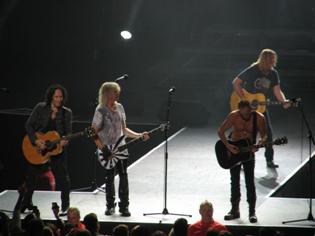 Their fans are so passionate! When the band did an acoustic set and Joe told everyone “You can tell people you were in Def Leppard for ten minutes.” When they did their huge hits like Let’s Get Rocked, Love Bites, Two Steps Behind, Rocket, Bringin’ on the Heartbreak and Rock of Ages the whole arena knew almost every word of every song! It wouldn’t have been a rock concert if a bra wasn’t even collected from stage. Classy!

You know when a particular song was the biggest hit of a band’s career when people get their cameras and mobiles out! Looking Rod Laver Arena was as if thousands fairy lights appeared when Love Bites started. It had a sensational guitar ending.

I have to say it was amazing to watch the drummer Rick Drummer perform throughout the night. He lost one of his arms in a car accident in 1984, right before Def Lepard signed their record contract but decided to continue drumming. Often the cameras showed how he drums and it’s by foot pedals! At the end of the show Joe especially thanked Rick for drumming night after night.

After Def Lepard’s encore Joe promised it wouldn’t be long until they return to Australia. 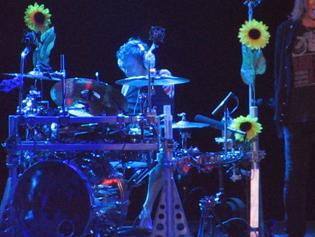 Setlist from Saturday night was:

Love, Reign O’er Me
(The Who cover)

Bringin’ on the Heartbreak

Pour Some Sugar on Me

Our Girls’ Night Out With Diesel

Ed’s Night At The Forum