Jacqui James 1 Comment on Matchbox Twenty Are A Talented Lot

I’M THE FIRST TO admit I was very hesitant about hearing INXS live with Ciaran Gribbin as their lead singer. I’m a JD Fortune girl and loved how he brought the sex appeal back to INXS’ songs. However, Ciaran has learnt to involve his surroundings to make performances engaging as before 2011 when INXS recruited him he did many festivals even with our beloved Powderfinger Ciaran said, “Thanks so much Melbourne .. It’s an honour being in here, I have watched the Australian Open.” 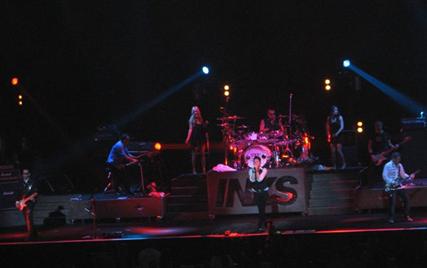 Ciaran definitely brings a more mature INXS than we saw with JD, but the band can still rock an entire arena. The band played for about an hour and devoted a section to their Kick album which they’re celebrating its twenty-five year anniversary.

The band are working on new album and performed Sugar. As a taste. during INXS’ one hour set the crowd responded well when INXS played Disappeared, Kiss The Dirt, a totally different version of Beautiful Girl, the Kick section: Need You Tonight /Mediate, Calling All Nations, (with a 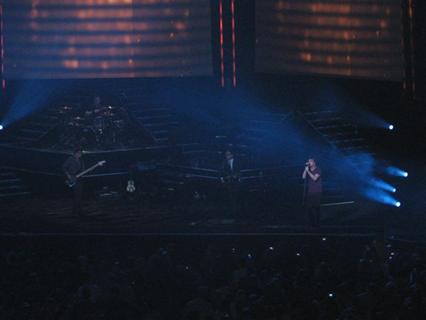 female backing singer), Mystify, Kick (with backing singers Ashtley and Ellen), Devil Inside, New
Sensation and Never Tear Us Apart which Ciaran said, ” This is for Michael,” , and urged the crowd to go wild just before Kirk’s infamous sax solo started. INXS’ last song was a rockin’ Don’t Change which had Ciaran running along in front of the first row.He said, “Thanks so much guys. God bless you.”

There’s only one word to describe a Matchbox Twenty concert and that’s un-freaking-amazing! As the night went on I kept being in awe at how long these guys have been around for! You’re talking to a fan since they released their debut single Long
Day from Someone Or Someone Like You in 1996 and everytime I see them I’m blown away!

Rob said they only have one rule at concerts and that is to “Leave all the shit outside and have fun for two hours!”

Matchbox Twenty don’t need fancy staging; all they had was stairs leading to platforms which changed colors. Rob, Kyle, Paul and and Brian’s board abilities are enough to impress anyone. They are music fans like us as Rob said, “How are you tonight Melbourne? We’re fucking great we see INXS! ”

There’s always a real sincerity that comes out of Rob’s mouth. During their massive hit 3am from Someone Or Someone Like You, Rob ad-libbed, “God Melbourne I believe this.” And Rob still has his signature hand moves 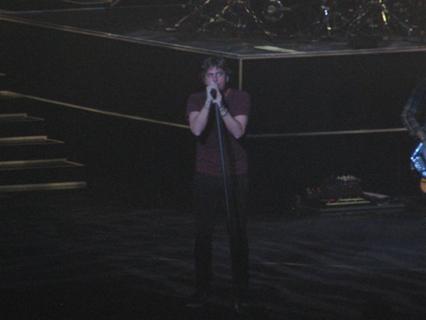 The crowd stood and boogied to All Your Reasons and sang loudly to Long .Day, but there’s always a song I look forward to hearing Rob and the band belt out… . Back 2 Good!! They didn’t disappoint , however they followed up with a track from North called I Will. Man, I could happily sit and have Rob sing, Paul on piano and Kyle play it on the acoustic guitar to me all day! It was so pretty and mesmerising. Rob said he doesn’t “like choose favourite f album but it would be “.

The encore begun with Matchbox Twenty’s most likely danceable track ever which is from North. Put Your Hands Up got everyone up! After a few songs Rob thanked us for the past sixteen years and wanted to say, “INXS were their support not because they’re Aussie but they were huge influence… There wouldn’t have been Matchbox Twenty without them ”

I’ll Believe You When

So Sad So Lonely