EVER SINCE I began Gigs ‘n Interviews in May 2010, I have had a wish-list of artists/bands I dreamt of interviewing. Some of those dreams have come true, others have come extremely close to coming into fruition. I have been extremely lucky and honoured to have interviewed many, many awesome and humble people who I now call my friends. 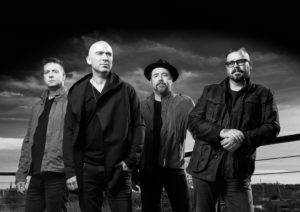 On the top of my wish-list was Ed Kowalczyk, the frontman of +LIVE+. He was the first artist who influenced me through a confusing time in my life. He taught me about spirituality, the ability to access a god wherever you might be and the appreciation and the need of accepting all religions.

Ed came from a humble background. Even through +LIVE+ are an international multi-platinum band from a large American state, Pennsylvania, Ed has remained humble and always aims to put a spell of positive energy and love over the audience they’re playing to that night. He sponsors children through World Vision and urges +LIVE+’s audiences to do so too. I think if you could look up the definition of a ‘good person’, Ed Kowalczyk would totally be there.

+LIVE+ are currently on their way to Australia, headlining Adelaide 500 on Saturday, March 3, but are visiting cities who missed out last year to complete their Australian tour: 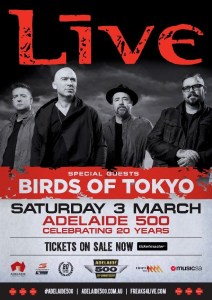 On the very day when I discovered that +LIVE+ would be the headline act of Adelaide 500, I begun knocking on doors and enquiring. The people who are organising Adelaide 500 made my ultimate dream come true, and it’s sweeter because this is my last interview ever. I’m extremely grateful to Steve and Deb who didn’t dismiss me and were eager to make this interview happen. So a million thankyous to you both!

When I received Ed’s answers to my questions, I must admit I did do a happy dance in my head! I couldn’t believe it, after all these years my perseverance had paid off!

So with much fanfare here is my interview with Mr. Ed Kowalczyk!

G’day Ed! How are you? Thank you very much for chatting to me. When I began this little site, you were always on the top of my interview wish-list, so for this to be my last interview it’s like completing a circle and I feel grateful to you.

Anyway, enough of me gushing, +LIVE+ surprised the world by doing a gig on New Years Eve 2016 and since then have done a world tour as well as recording new music! No need to say the obvious, but it seems +LIVE+ are full steam ahead?

There’s this extra level of gratitude and energy in the band that is really infectious. The fans can feel that we are having a blast being back together. And the cherry on top is that this energy has carried through into the writing and recording process as well. {We get} super excited for the fans to hear what we are up to.

Take us back to the NYE gig. Was it easy to slide back into the role of the front man with +LIVE+ after your extremely successful solo career?

If anything, it was not only easy, but I feel like the solo years made me a better singer and performer…my chops on guitar have really reached a new level too. Nothing like carrying a tour with nothing but an acoustic guitar to build up those muscles!

Ed laughs} Your guess is as good as mine! That song in particular is more of a montage of different images and feelings as opposed to a specific story about anything. I guess I just wanted to write a song that made me feel like I was just letting go and “riding” into the sunset, totally free and full of intensity and lust for life. My wife won’t let me have a motorcycle, so Lakini’s Juice and its chorus is about as close as I will get to Easy Rider.

+LIVE+are on their way back back to headline the Adelaide 500 as well as shows in Sydney and Perth! You guys must love us to come back so soon after December. What can your fans expect from your upcoming shows?

We are going to do basically the same show we did on the last trip to Australia. Expect upwards of two hours of all our ‘hits’ and a few covers that we have been doing. We do our version of Johnny Cash’s I Walk The Line and Audioslave’s I Am The Highway in honour of Chris Cornell. It’s possible we will get one of our new songs in there as well.

I’ve been to a few of your Melbourne shows (both solo and +LIVE+) and what I admire the most is how you can create a dome of love, positivity and most importantly unity. How do you achieve this especially when we’re in the age of immediate news which is mostly awful?

Thank you. I feel a deep need onstage to bring the people together. It’s such an awesome opportunity and blessing to be up there, doing what I love. I think people can feel that I never take my gifts or the fans for granted…I feel like that is what makes a show feel like more than a show; it feels important in some way. I want to perform shows and attend shows that feel like that…I feel like it’s a wasted opportunity not to try and make it really special for the fans every night. And yes, in terms of pop culture as it stands at the moment, +LIVE+ concerts are different…we want to make something happen that you can’t just scroll through like a Facebook post; we want people to take it home with them in their hearts and have it continue to inspire them until the next time.