Skip to Content
Home Gigs Kylie – The Goddess Of Love

Jacqui James 1 Comment on Kylie – The Goddess Of Love

Kylie Minogue (with special guest Gypsy And The Cat)

AS YOU WOULD IMAGINE KYLIE didn’t hold back on her Aphrodite World Tour 2011 at all! Either did some of her fans either which Kylie acknowledged and loved!

My sister and I agreed we went more for the spectacle, and what a spectacle it was! The stage was set as a Greek temple and when it was time for Kylie to make her entrance as the Aphrodite- Greek Goddess of Love, she rose from underneath the stage on a golden Pegasus. 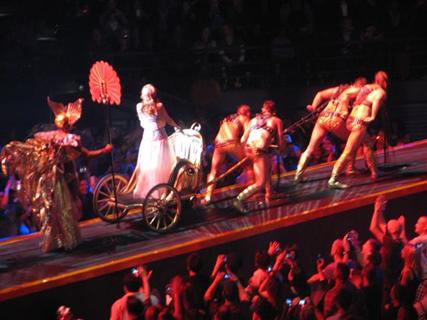 The stage was the face of a white temple that had a large staircase in the centre and two on either side. Then into the audience there was a walkway into the crowd so Kylie and her many dancers could get up and personal with her admiring fans!

Almost in every song the Goddess had many dancers around her, worshipping her! Some even were doing acrobatics in the air. During her hit Believe In You she had very fit, muscly Roman soldiers pulling her around the V in a chariot.

Kylie asked Melbourne “How are you feeling tonight?” with an overwhelming response. During the beautiful and intimate You Don’t Love Me (which was only her pianist) Kylie had to compose herself after a very lovely ovation from the crowd.

Kylie and her entourage had so many costume changes that it would be impossible to mention every one, but with all The Goddess looked like a goddess!

Kylie did a fabulous version of Euryt

The encore was mind-blowing, involving water and lots of it! Water spouted up out of different holes along the “V” in different colours even spouting across it, which had fans inside it who didn’t seem to care! Then at the end of the “V” a fountain rose with Kylie on top and her dancers draped over it underneath. Oh yeah there was couples doing acrobatics around the fountain!

I have to mention how great Gypsy And The Cat were as Kylie’s support!

ies I don’t think I should put my setlist up because mainly I guessed the song titles, but the photos are more exciting anyway.