BRISSY BAND KINGFISHA are definitely one-of-a-kind in Australia. Their firm roots in producing reggae music has seen the six member band having success on Triple J and community radio, as well as touring to thousands over Australia and New Zealand.

With Anthony Forrest’s smooth and gentle vocals, Kingfisha’s tracks are the essence of typical reggae music. You could listen to Kingfisha’s music and be transported to an island on a sunny day with your feet in the cool water 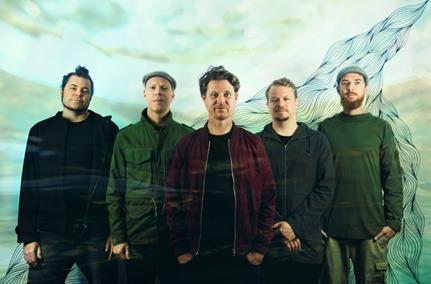 Reggae and club music aren’t an usual combination you would think of, but the guys have raked up over 200,000 plays on their Soundcloud channel with their Westwood Recordings’ remixes of their originals including “Looking Glass”, “Enough” which has a bass-rich beat, “Tomorrow”.

Having recently released their new extremely cruisey single “Water Running”, Kingfisha are in amidst yet another tour which includes the prestigious appearance at November’s Australasian World Music Expo (AWME) in Melbourne.

Kingfisha’s keyboardist Jason Leca kindly answered some questions for Gigs ‘n Interviews. Thankyou Jason and the team at Heapsaflash (who have just won a 2015 Australian Multicultural Marketing Award) for organising this interview.

G’day Kingfisha! Welcome to Gigs ‘n Interviews! It’s lovely to chat to you guys who make reggae music in Australia! How did the six of you get together and discover you had the passion to produce reggae music?

We all used to play in Brissie bands in the reggae dub vein for a few years (promiscuous, Kooii, heavyweight champion The Serenity 21 Dub St) and so eventually Kingfisha was born. It started as a recording project between Anthony drew and Shannon and eventually became a live band as well. I personally got into dub music in the 90’s I fell in love with King Tubby, Lee Perry, Scientist Prince Jammy – the early stuff. I remember buying a Tascam four track with two effects loops and began experimenting with dub and reggae then.

Your latest single “Water Running” is a very cruisey reggae track. Australia has had a huge void in this genre apart from the awesome John Butler Trio. Do you see it as a challenge to make Australia listen to something cool again?

{Laughs} I never thought it was ever not cool. No I think we all come from a genuine love of the style but we try to add our own take on it. I think with Anthony’s vocal style and songwriting it adds something else say {like} an honesty, not trying to be something we are not. Yeah, but reggae is definitely not as big in Australia as say New Zealand or Europe

You’ve worked with several DJ’s (or mixers) around the world to re-record some of your previous tracks (“Looking Glass”‘, “Let you Know” and “Enough”). These tracks have been played tens of thousands of times. Kingfisha are liked by fans. Were you surprised by this?

Yeah I am always surprised by this. I think those remixes opened up Kingfisha to a different audience as well.

Are you working on your sophomore album at the moment?

Yes we are currently working on a new album I expect it to be finished in the first quarter of next year. We are perfectionists which is good so we try not to rush these things. We initially recorded some bed tracks with Jake Savona and Eric Cohleo in April and did some more work on the tracks with Paulie B at Tanuki and King Charlie has been doing final mixes for us in Melbourne. Peter Gardiner is also mixing a track ATM which is sounding real nice.

You’re in the midst of a national tour. How is that going?

Yeah it has been great. It is always great to play in other cities you know spread your horizons; play with new bands . I really enjoyed playing at the Evelyn in Melbourne the other night and the support bands have all been excellent. Cactus Chanel {Kingfisha’s support act} were amazing

Are you all excited about performing at the Australasian World Music Expo in November?

{We are} very excited about AWME and very honoured to play that again. Last time we got to do Sakifo Festival at Reunion Island after playing AWME so hopefully some more doors open {for us}

Thanks so very much guys for chatting with me! I hope Australia continues to embrace Kingfisha. 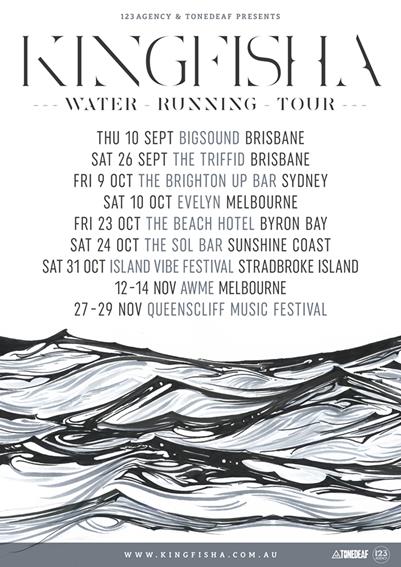