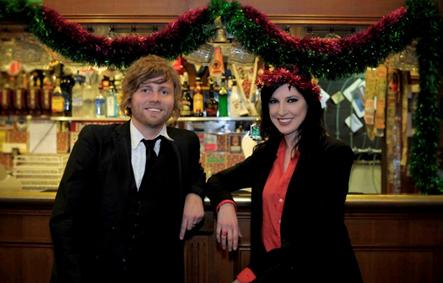 KEVIN MITCHEL OR BOB EVANS (which is his stage name) has gone from pure grunge with his band members in Jebidah in the 90’s to now a more laid-back, sometimes folky solo-artist.

Kevin also had success when he joined forces with Steve Parkin (singer/songwriter), Josh Pyke (a very successful singer/songwriter), and Kav Temperley (from one of Australia’s favourite bands Eskimo Joe)to form the supergroup Basement Birds. In the future Kevin sees the band releasing other albums which likely will be received extremely warmly like their self-titled debut album.

Today,Goodnight Bull Creek is his latest solo album was recorded in Tennesee, Nashville and Kevin says “This is my rock album. I’m saying goodbye to the suburbs”. But if you listen to his track on Myspace Brother, O Brother you can really hear the Nashville influences in it.

I believe Australia today doesn’t have many gifted songwriters who get back to the basics. Kevin’s many tracks sound unique as well as telling a story. It was a real honour to interview Kevin and I thank him for his time. Also a big thankyou to Victoria who’s the PR for “Good Evans, It’s Xmas! (A not so silent night with Bob Evans and Adalita.)” *pictured above

Not many people would know your name is really Kevin Mitchell. How did the name Bob Evans come about?

Many more people know now.  When I first started playing as Bob Evans I wore the name like a disguise to do do incognito shows but these days I am very open about it because there doesn’t seem much point in continuing the charade anymore.  The name came from a t-shirt I used to own.  It was blue and had “Bob Evans” written on the front and the number 15 on the back.

Remembering when Jebediah first came out as a band and how punk rock you guys were, is Bob Evans’s nice and polite cousin?

I’ve often thought that underneath it all there really isn’t that much difference between Jebediah songs and Bob Evans songs, in that they are all pop songs that conform to a certain structure.  The difference with Jebediah is that there are three other personalities involved and when a song goes through that process it becomes a Jebediah sounding song.  Bob Evans gave me a chance to explore my interest in more old fashioned style, bar room, alt-country, (for want of a better term) kind of music but that of course morphed in to other things.  Pretty much any musical interest I had that didn’t fit in to the Jebs style I used Bob Evans to explore.  Is Bob Evans nicer and more polite?  Perhaps.  That is one way you could describe it I suppose.

How would you describe your music?

I wouldn’t, or at least I try to avoid doing so.  For one it becomes tiresome.  I don’t mean to sound arrogant or rude but I’ve been making music for sixteen years and have built up a body of work that is fairly extensive now so trying to describe it in a short, neat, concise way always feels like I am short changing myself.  Also, describing music is not the job of the artist.  It is the job of the music critic or the music lover who is trying to turn their friend on to something new.  So these days I usually just recommend to anybody who may be interested to simply seek out my music and find out for themselves.

You recorded latest album Goodnight Bull Creek in Nashville, Tennessee. Can you describe that experience?

I’ve made the last two records in Nashville and it has been some of the most rewarding experiences I’ve ever had.  It is such a musical city, rich with all sorts of interesting modern history and filled to the brim with all sorts of characters all united in a passion for music.  The locals are friendly.  I struck up a great relationship with Brad Jones who produced both records and taught me so much about music and life.  I got to play with some exceptional musicians on those records and the end results are two records that I am immensely proud of.  Taking your music to a place like Nashville, or New York or London is strangely and beautifully validating.  It gives you those moments where you think to yourself, “Jeez, look what I’ve managed to do!  Isn’t this fantastic!”

Last year you supported Powderfinger on their last ever tour. Was it emotional for you to watch?

It was a bit actually.  They weren’t making that big a deal of it which is very much their style.  They are such a down to earth and unassuming bunch of gentleman.  Also the shows were in the UK before they did their farewell shows in Australia, so I imagine the really emotional shows were still to come.  But I made a special effort to watch all the shows and really take it all in as I knew it would be my last chance.  I’ve actually known them for quite a while.  They took Jebediah on tour in 1997 before we put out our first record.  I quickly came to admire them.  They are deserving of all the success they have had and I have them to thank for some really great touring experiences they have handed to me over the years.

Don’t You Think It’s Time is one of my personal favourites of yours for its simplicity. Was it one of the songs simple to write?

I suppose it was.  I came up with the music part of the song very quickly in a hotel room in Melbourne.  Then it was just a case of getting the lyrics right which happened over a period of time.  It was one of those songs that didn’t need editing, didn’t change from original concept through to the finished recording and didn’t need much instrumentation or fleshing out.  It’s just very direct and I guess that’s what people were drawn to.

You’re about to do some gigs with Adalita in December. Are you looking forward to that?

Very much so!  We have been friends for a long time but it will be the first time we have done shows together without our bands.  I’ve never actually seen her play solo before but I love her album so I’m pretty excited about it.  We are doing Xmas themed shows together and singing some duets and carols and things.  It will be good fun.

Was being in The Basement Birds a whole lots of fun?

Yes!  We worked on the record over a long period of time and it all came together very gradually.  We made a record and we also learnt alot about each other.  By the time it came to touring the record we had all built up a pretty strong bond and were all very much at ease with each other.  We had some long deep and meaningful conversations during our time together that were often quite therapeutic.

Can you see collaboration with one of your friends like Josh Pyke in the future?

He’s definately one of my favourite people kicking around.  We are quite different in many ways and have quite different backgrounds but we get on well and I enjoy his company and conversation.  We often talk about touring together again so I’m sure something will happen again one day and I expect the Basement Birds might do another record one day too.

I’m going to make a new Bob Evans record.  I’ve been writing and demoing it for the last two years and I think I’m getting close to being ready to record something.  I’ve decided to make the next one in Melbourne both to be closer to home but also because I want to make a different record to the last two and work with different people and just shake everything up a little bit.  So that will be the main focus next year.  Jebediah will continue playing shows next year too.

These are the dates for the “Good Evans, It’s Xmas! (A not so silent night with Bob Evans and Adalita)” show:

The Delightful and Man Of Many Talents Damien Leith

Boy & Bear Have No Limits