FINALLY AUSTRALIA’S GIVING Keith Urban the recognition he deserves! Once again, Keith and his all-talented band put on a fully charged two hours plus show in front of a responsive Melbourne crowd last night. 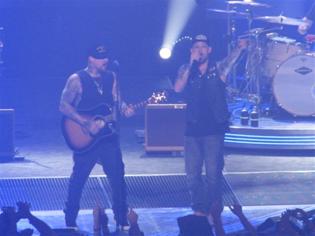 Keith’s mate and judge of The Voice Joel and his brother Benji were the support act, who are just a lovely dudes. Their new band The Madden Brothers definitely rocked the house. Like usual brothers they made fun of each other; you could say they’ve adopted the Aussie humour to a tee, but Benji told us how much he admires his twin brother for always Skyping with his family even though he joked saying Joel was often drunk talking to his daughter.

The Madden Brothers will be releasing a new album later in 2013, but last night they did Good Charolette’s classics like Dance Floor Anthem (I Don’t Want to Be in Love), Last Night and a very unexpected team-up with Keith later on.

When the lights went out for Keith, everyone went off! There was a beat which quickened up until the curtains dropped down. You Gonna Fly caught Keith’s enthusiasm to be playing in his home country with such positivity from his previous shows. 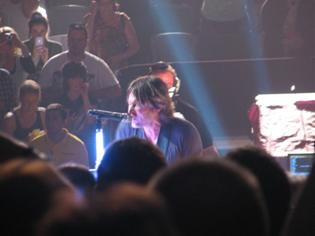 ng with Keith, he’s always so considerate to his audience. It just shows how he puts himself in fans’ shoes and tries his hardest to please everyone, no matter where you’re sitting or standing! He took the time to read out some of the signs people were holding up and told us to ignore the security guards and those people behind you who grump because they can’t see because it’s all about having a great time! Throughout the night he moved to small stages setup in different spots around the arena so everyone could get a closer look at him. When Keith performed You’ll Think Of Me he was on a slow-spinning circular platform in the centre of the arena. 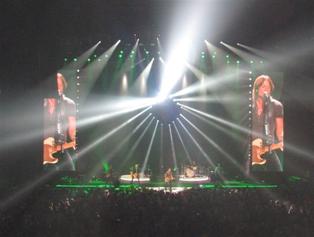 I think I have previously said on Gigs ‘n Interviews how I firmly believe Keith is one of the most underrated guitarists around! Keith is a musician who can make his guitars assimilate emotions. One of my favourite tracks Stupid Boy (which tells a story about a woman under the thumb of a controlling husband)
begins with a timid sounding acoustic guitar, then at the end Keith lets his electric guitar rip as the voice of the husband realising the wife isn’t coming back. Til Summer Comes Around was another track that Keith’s guitar conveyed the emotion of longing for someone.

Keith has an amazing band who are all talented musicians/singers in their rite. At one stage when some were introduced to the audience they sang a verse and chorus of a song including ADCD’s It’s A Long Way To The Top.

When Keith and his band started playing Oasis’ Wonderwall I was truly shocked at how natural it sounded. Then when The Madden Brothers joined Keith onstage it took the song to another place. 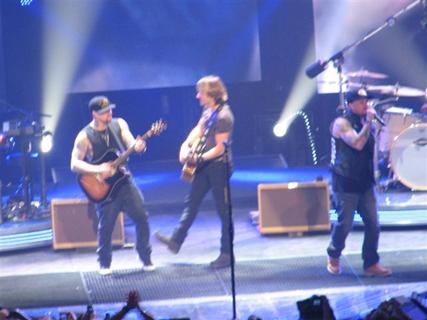 The time for Keith to get to a stage at the back of the arena, he casually walked through the side path high-fiving people along the way. On the back stage he did I’m In and Days Go By.

One of the absolute highlights was when Keith picked out three people to go onstage to have a competition singing the chorus of Kiss A Girl. The youngest and the most confident girl stole the stage singing the chorus and Keith sat laughing.

Amongst the crowd’s favourites were Put You In A Song, Told You So, Raining on Sunday, Without You, Better Life, Somebody Like You, Kiss A Girl and Sweet Thing.

At the end of the night Keith stayed onstage to shake fans’ hands and signed merchandise for the lucky people in the front rows. He did this for probably five minutes… What a guy!

Put You in a Song

I Told You So

Making Memories of Us

Wonderwall (Sang with The Madden Brothers)

‘Til Summer Comes Around

You Look Good in My Shirt

You’ll Think of Me