Skip to Content
Home Gigs Keith Wants To Escape Together

Jacqui James Leave a Comment on Keith Wants To Escape Together

KEITH URBAN AND HIS BAND absolutely rocked Rod Laver Arena last night for their first and Australian Melbourne show. Towards the end of the night Keith admitted to the loud crowd that he and his band didn’t know what to expect, so the reaction all night made him very thankful. 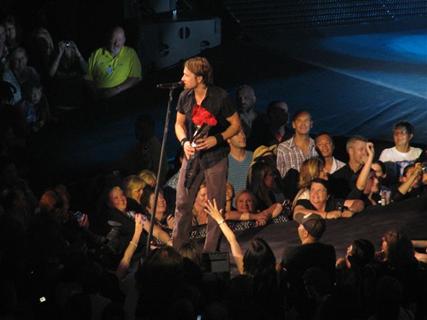 Rod Laver was packed to the rafters and Keith made sure you were able to get a closer view of him as he moved to various little stages during the night. There was cowboy boots and hats (even hats of the Mexican variety) and boys and girls of all ages! I even saw a baby under two years-old in their Dad’s arms.

The energy and joy he and his band had was present when they kicked off with Days Go By. The crowd was on their feet straight away. Keith rejoiced that they had finally made it back to Melbourne.

Keith showed why he is a numerous award winner with his brilliant knack of writing songs from the heart, making us ladies swoon over his romanticism and making guys curse for this! Watching his performances on TV and DVD’s I had always been impressed how

I was quite surprised how accessible Keith and his band were to the audience. At each side of the stage were ramps leading down to eager fans! It was actually great to see and at the beginning of the night Keith made a point of telling the security guards to go easy on people as it was in fact a Saturday night.

He dedicated Once In A Lifetime to his absent wife Nicole Kidman, mainly playing the track on an electric guitar by himself.

Later in the night we were very dazzled when Keith appeared with an electric guitar which was covered with hundreds of different coloured lights.

For the first time in my blogging career, I forget to write notes at several stages of the night as I was enjoying the concert that much. I think it’s the fact that Keith and his band are so humble and enjoy playing shows. Keith introduces his band mates one by one and most get up to Keith’s mic and sing a verse of their favourite songs.

Where The Blacktop Ends

Once In A Lifetime

Making Memories Of Us

Only You Can Love Me This Way

Standing In Front Of You

Til Summer Comes Round

You Could Be Right (with Meagan Washington)