Skip to Content
Home Interviews Katie’s Travels With The Captains

KATIE NOONAN IS A very busy woman. Not only has she teamed up with a new band The Captains, she has another upcoming album with another band Elixir! She’s also the proud mum of two young boys and is currently on the road touring Australia with The Captains until March. 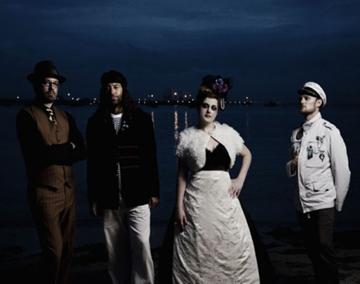 Today Katie is very content which she accounts to being surrounded by the “right musical partners”. Her collaboration with The Captains has produced the album The Emperor’s Box which contains much heavier tracks than George like Page One (see below). But the title track is a gentle and beautiful track showcasing Katie’s heavenly voice.

Page One by Katie Noonan and The Captains

I hope you enjoy my interview with Katie!

On Myspace you say how you’re the happiest you’ve been since the days of George because you are surrounded by the “right musical partners” i.e. your band The Captains. What’s so special about this bunch of musicians?

Well I had a very special and deep musical connection with my band mates in George for ten years, and for a while there I was wondering I would ever find that kind of connection again… but yeah am happy to say I have found that musical kinship with the captains, so am very happy about that!

Katie Noonan and The Captains released Emperor’s Box in April 2010 and since you’ve received rave reviews from the music community. That must feel great?

Yeah well when you build this little world of music you hope that people will find a door into to and find something special inside that relates to their life…so to have people say that is the greatest gift back to a musician – ultimately that is why I make music … to connect with other people.

Page One is a mash of rock with your heavenly voice. What inspired you to take
this direction with your music?

we just jammed it as a band and that sound slowly came out… for me it feels like a bit of a return to form for me perhaps, in that my earlier work was more guitar based with a slightly heavier edge. I wanted the songs on the album to be a real sonic journey… from gentle and intimate through to large and epic, like Page One

You describe many songs on Emperor’s Box as “gifts for loved-ones.” Do your
two sons know how their mum is a famous singer?

They know Mum and Dad love music but that we love them more!

In October you played with an orchestra. How does that compare to playing
with the band?

There is something very magic about the lusciousness of a chamber string orchestra that can never be replicated- it is such a gorgeous sound and I felt so very blessed to do those concerts, it was a real thrill for me.

You proudly say, “Obviously I don’t fit in any way the pop star mould. I never will, and I don’t ever want to”. This is an attitude that is widely admired but sadly is rejected by most record companies? Do you feel like you’ve shattered the common ideology of a successful singer/songwriter?

Oh well I just do my thing and try to be as integrous as possible…but I hope that people realise that music is about sound not vision! I do remember explaining to quite a few promo people that babies  require breastfeeding every 2-3 hrs and it was like I was speaking a foreign language sometimes!!?????

Where do you get your inspiration to write songs?

My family, my friends, nature.

Well I find the city a bit hard sometimes!

You’re touring Australia until March. Do you enjoy being on the road?

Well I love playing music but I miss being home and it’s hard being a working musician and a parent …but it is part of what we do so I just try and make every gig special.

After this national tour what are your plans?

I am recording a new album with my trio Elixir, then touring with classical guitarist Karin Schaupp in April/may and then releasing and touring the Elixir album!

Thanks very much Katie for taking the time out to answer these questions. I
really appreciate it!

Also as always a big thank you to Will from Heapsaflash for teeing up the interview with Katie!