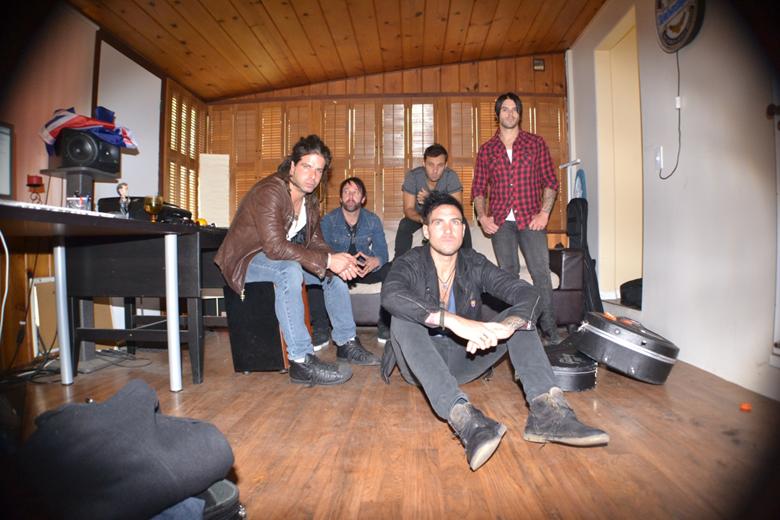 Last year on Gigs ‘n Interviews I was very lucky (and very nervous) to be able to catch up with Toby Rand at the stage where an American record company had just signed Juke Kartel which Toby’s been the frontman of since the band’s conception!

Since then JK have gone from strength to strength. America has fallen in love with Juke Kartel and Juke Kartel have fallen in love with America. But don’t think all of this is going to Toby’s head. He’s just as grounded as before! With a little daughter living in Australia, his family means everything to him! Unlike many rockstars, his family musical career is a means to being able to support his family in the future.

Juke Kartel have a new keyboard/guitar player (who’s a Brazilian) and are now looking forward to 2012 when they’re going to tour Melbourne and its outer areas on their Freeway Tour in January and later in the year will be  recording a new album!

I contacted Toby a couple of months ago and like our previous interview, he was charming as ever, and it was lovely to be able to have a laugh or two with each other! Enjoy folks!

Juke Kartel have had a rockin’ year in America! Can you tell people about Juke Kartel’s new keyboard player and management?

Hey J…we have had a great, defining year in the US. We had just taken onboard to new managers Larry Abramson and Ryan Young. Both have flourishing careers in the music and movie business. Immediately they have aligned us with great songwriters and producers for our upcoming album. Our keyboard/guitar player is Antonio Oliveira, a Brazilian. He has injected such amazing new energy and creativity. He has really added to JK and our new direction is thriving.

Personally I’ve been following your video blog and sometimes I crack up because having been to America myself, I’ve found most Americans don’t have a sense of humour. Have you found this a lot too?

I describe it this way. They aren’t used to the Aussie, sarcastic way of life. At a show in Texas, I was reeling off one-liners, but the crowd just didn’t understand, so I had to resort to my interpretation of the American accent. I’ll do anything to win over the Yanks!!

Do you suffer from homesickness, especially now having a little daughter back here in Oz?

I miss the people so much. My daughter is growing up on Skype and it’s really hard not being able to hold her. I am putting so much effort into building this band in the US so that I can give her a life, most people dream about. Next year when I get my own place, her room is priority. I miss the rest of my family…it’s funny, in my absence, we’ve all grown closer. I miss my ‘lil niece, Morgan. We have been best friends for most of her life.

Hollywood is my home now. It’s where I achieve, pay bills, tour and am looking to really create a life for my family. Melbourne will always be where I’m from and what I love the most, but I’m here as part of my life’s journey.

I’ve read on your ages ago on your Facebook (cos I’m really stalking you… NOT! {Jacqui laughs}) that you sat next to the Glee cast at the American Horror Story premiere. Did you think to yourself WTF?

You stalker!! {laughs}. Yes, Hollywood can be a surreal place. I actually don’t watch Glee so had no idea who they were, but they were awesome. Once you’ve lived in this place, alot of the glitz becomes the normal…I kinda miss that excitement.

You’re so passionate about raising awareness and finding a cure for breast cancer. Can you tell readers of Gigs ‘n Interviews how can they get more involved in the cause?

Yes, this is very close to our hearts. Our drummer, Jaybro Pinfold’s mother is a survivor and we almost lost her twice. So we wrote a song for her called Brightest
Star. It has been released through iTunes and proceeds go to the Komen Race for a Cure. We are proud and honoured to be ambassadors for the cause. If you go to iTunes and type “Juke Kartel – Brightest Star”, you can help raise money for the campaign.

I’ve recently reviewed your brother Simon Rand’s self-titled album. You two couldn’t be more different musically! Were your parents the types who listened to all kinds of music?

I’m so proud of Simon, and he is of me. Yes, we have different tastes. I think it stems from his move to London when he really became a writer. His influences changed a lot whilst I followed a more US rock route. And then once I moved to the US, well my head has exploded.

You have very exciting news for Juke Kartel fans! You guys are working on a NEW album! Do Tell! Do you know when it will be released?

I’m actually sitting here in the studio right now as Tommy lays down bass on a highly intense track called “Backing Away”. The new album is gong be very different. A lot more high energy and even dancey in parts…but always true to our rock element. We are kinda merging rock, dance and emotion….whilst including some real heart-tearers. I’m so excited. Working with amazing people and the first single should be out by February…the album most likely April-May. There’s a strong buzz around town about it all.

Something even more exciting you and the guys are heading back to Australia in January for your Freeway Tour. You must be so excited to be coming home?

Can’t wait to hit the Freeway Tour. It was only supposed to be a family visit, then we realised we hadn’t done a pub tour since January 2010. Our tour with Slash in August 2010 ware our last Oz shows…so now it’s time to see all our friends and fans. We’ll be playing 5 to 6 fresh tracks and just be so happy to be around our Aussies!!

What else is happening for Juke Kartel in 2012?

2012 is our year…with the release of the album, we’ll be touring the US extensively and working on movie soundtracks, cutting music videos and collaborating with many influential writers. JK12 is it!!

You can catch Juke Kartel on The Freeway Tour at these following venues:

Thankyou Toby again for being so open and honest in our interview. I always enjoy our chats.