JAMES BLUNT HAS a bit of a reputation of being a nancy boy who only sings lovesongs which make the ladies swoon over the world! Well let me tell you… 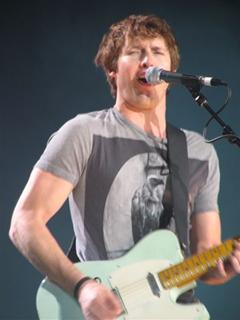 Unlike most artists to get onto the stage, James came running from the entrance doors, right through the crowd and leapt into business with his aqua guitar. He was dressed in normal jeans with a t-shirt, nothing flash.

His charisma and cheekiness were apparent from the word go! He urged people to stand up, but jokingly said “I’m going to play three hours of slow songs so you can sit down then!” James wanted people to undress because afterall it was a Saturday night in Melbourne! It took These Are The Words for everyone to stand up but when they did, the gig went to another level.

Even though his recent album Some Kind Of Trouble has a more upbeat and blissful sound to it like James’ worldwide hit Stay The Night, when James revisited his major ballad Goodbye My Lover, you could have heard a pin dropped until the last chorus when he invited the crowd to sing with him. This was my personal favourite of the night. 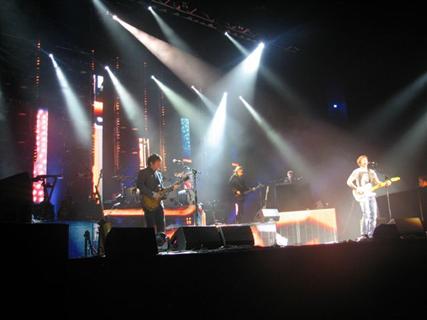 Unfortunately when everyone flocked to the stage and formed a dance pit, I caught very, very brief glimpses of James (note to security guards: if you ever pass someone in a wheelchair who obviously can’t see a thing, maybe help them and their carer to the front of the crowd…just a suggestion!) but my sister said he crowd surfed during I’ll Be Your Man. But before everyone flocked to the stage I noticed how James interacted with his bandmembers so well.

The second last song was Stay The Night and the mosh pit had a ball singing along and in the last song 1973 James stood on top of his piano and urged the crowd to clap along to boost the fun atmosphere even more.

These Are The Words

Out Of My Mind

If Time All I Have

I’ll Be Your Man