YESTERDAY AT ROCHFORD WINERIES the must-have fashion accessory was gumboots; little mud (ok a lot of mud) didn’t deter people from enjoying A Day On The Green with Sean Kelly (from The Models), The Baby Animals, Train and INXS.

Unfortunately due to the traffic from floods, our group missed Sean Kelly but we managed to see most of Baby Animals’ set. It was quite impressive how the band is as good, if not, better than when they first formed in the late 80’s. Early Warning sounded fantastic and it was great to see ladies from my generation totally rock out! Suzzie DeMarchi’s the ultimate rock chick, fierce and always powerful! At one stage she asked one lucky (or unlucky) guy from the audience to stage at the stage foot and she took a great big swish from a bottle red bottle then spat it into the guy’s mouth. 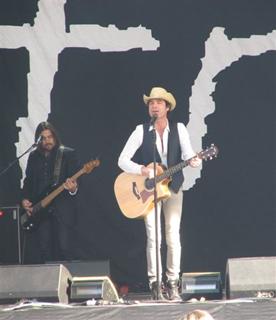 Train was just as good and kept the crowd involved. They played for an hour having fun with everyone. During She’s On Fire where they leapt into country for a few minutes, Pat (lead singer) picked up six young girls/teenagers and got them onstage where they each put on a t-shirt saying “Trainette”. Pat instructed the lucky bunch to dance and sing, and then called them “Australia’s own Trainettes”.

If you have heard Train’s version of Led ZePplin’s Ramble On before you’d know how awesome they do it. Seeing it live was even better. Pat joked, “If you’re under 30 we wrote this!” During their latest single Marry Me Pat walked through the crowd serenading the women. Train ended their set with their big hit Drops of Jupiter and said, “Thank you Australia. You’re always kind to us.” 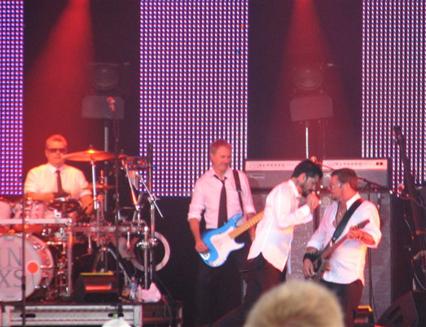 Onto INXS. What an entrance the three Farris brothers made! Andrew, Tim, and Jon each were wearing black suits with white shirts and Andrew and Jon were playing drums! They sounded awesome! It was the beginning to Suicide Blonde and the crowd was in awe with what they were listening to.

I gotta admit, once JD came onto the stage I was hopelessly distracted! JD has this raw sex appeal, mixed with desirable charisma that is just mesmerizing!

Unlike the Switch concert I saw in 2006, now it can be said JD puts his stamp on INXS’ classics, he’s not just the winner of their reality TV show he’s an artist who brings his individuality to songs. Stairs from the X album is one of my favourite INXS songs and last night JD sang it so passionately and so meaningfully you could see how the track affects him. Sometimes he gets so intense that you think whoa!

The guys of INXS like to reinvent some of their classics (they have recently released an album called Original Sin) and last night they treated us with their new version of Just Keep Walking which sounded a little like reggae. Love Is which was an Australian-only track from Original Sin was well received by the crowd but when they did songs like     Listen Like Thieves, Kiss The Dirt, Pretty Vegas, You’re My Kind, Original Sin, What You Need, New Sensation, Never Tear Us Apart, Kick and Don’t Change (rock version) people stood up and rocked!

Kirk, Andrew and Jon paid a beautiful tribute to Michael Hut hence with an acoustic Don’t Change. They each sang and the acoustic version just added to Michael’s presence. 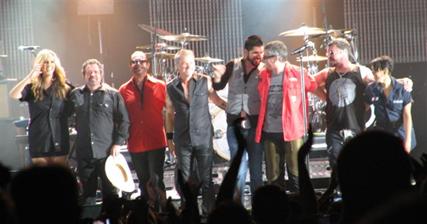 Pat from Train returned to the stage and sang Beautiful Girl. Tim then revealed that it was his wedding anniversary which received a big applaud from the crowd.

When JD returned to the stage and sang Not Enough Time! His sex appeal and falsetto is a dangerous mixture; the women in our group swooned! JD would often smile in disbelief as the crowd was forthcoming with praise. He called us “good singers”

INXS’ encore got the crowd amped up! By the end of the night everyone was buzzing with electricity! INXS are back and last night they showed us why they were just superb!

Don’t Change (Acoustic With Kirk, Andrew And Jon On Vocals)