AS WELL AS 2019 being the twentieth anniversary of her debut chart-topping hit Absolutely Everybody, Vanessa Amorosi is back with her powerhouse vocals with a brand-new single Hello Me.

On September 6th, Vanessa’s tribal sounding self-discovery single Hello Me was released. You can watch the video after being dropped today here:

In April the acclaimed single Heavy Lies The Head made everyone see that Vanessa’s back in a big way! Hello Me is just the beginning of a new chapter for the singer/songwriter with her upcoming album recently confirmed.

Later this year showcasing her new music alongside her previous hits, Vanessa is taking part in the One Electric Day concert series happening around the country, also offering off-side solo gigs in some areas. You can check all Vanessa’s tour dates on Facebook.

I was lucky to chat to Vanessa again, before Hello Me was released on September 6.

When you released your first single Heavy Lies The Head earlier in 2019, I thought, “YES, Vanessa’s back with a punch!” Did you want to release a track to say, “I’m back baby”?

I wanted to release something that was a little bit risky and pushing the envelope a little. Heavy Lies The Head I think was the best introduction to this new album. It’s very diverse and has no boundaries but still pop .

Your brand-new single Hello Me, sounds very tribal. Are you excited for fans to hear different genres from you?

You went to L.A after the huge success of your back to back albums Somewhere In The Real World in 2008 (which featured your huge hit Perfect which became the most song played on Aussie radio for three years), then 2009 saw the release of yet another album Hazardous which debuted at Number 7 on the Album Chart. After the success of these albums did you mean to take a rather lengthy hiatus before releasing new music?

I definitely needed time to get my life back in order and also get out of my comfort zone, work with different people and {to produce} different types of music.

Working with the legendary Dave Stewart from Eurythmics in L.A must have been an incredible experience?

Working with Dave over the years has been an incredible learning experience and he’s definitely been a huge mentor to me. 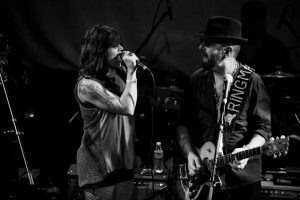 Working with Dave and other talented producers around the world, what did you learn about yourself?

Working with different producers, artists and songwriters has taught me to be brave lyrically and be confident in sharing my story. I also felt that specially with pop music there was a formula, so moving away from that and exploring less of a format has been very liberating.

From November 2nd, you’re doing gigs both solo as well as a part of One Electric Day featuring Jon Stevens, James Reyne, Southern Sons and the ultimate Aussie performer John Farnham.  Are you keen to get on the road again, doing your own gigs as well as especially with such a bunch of Aussie legends?

I love performing, so any stage is a good stage. It has been super lovely being on the road with the artists because I’ve grown up with them and it’s like being with family

WHOA! 2019 is twenty years since Absolutely Everybody was released, making you nineteen at the time. If you could go back and advise that nineteen-year-old, what would you tell her?

If I could step back in time, I would tell myself to smell the roses.

Being a Mum and wife, do you have a totally different view approach to your music and the industry now?

I think being a Mum has changed the way I think about love, real love, which makes song writing have more depth. {smiles}

Thanks, so much Vanessa for chatting with myself again. I wish you all the very best for your upcoming single Hello Me, your upcoming album and tour.