WHEN GUY SEBASTIAN announced that he’s been in the music industry for ten years at last night’s first of three concerts at Palias Theatre it was like whoa how time flies. He said how he doesn’t take his success for granted and knows how music affects people in different stages of their lives.

But Guy’s definitely evolved into a versatile artist who has pushed himself to experiment in different genres from soul, gospel, rap to rock. Last night he and his great group of collective musicians gave us a taste of his future material and again, it will surprise people!

His support was the very charming singer/songwriter David Ryan Harris who is so natural interacting with the crowd. He was constantly joking with everyone and plugging his album which was available to buy in the foyer. After his set he sat outside at a booth autographing his album for people and having photos with them! Our lucky friend’s daugh 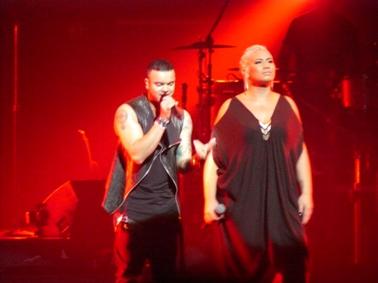 ters had their photo taken with him and they said David was lovely. So David, if you happen to read my review, please e-mail me! I’d love to interview you! 😉

Guy heavily featured his tracks from latest album Armageddon, but nearly every song had a different spin live which was impressive. He even incorporated Swedish House Mafia’s Don’t You Worry Child into the end of Don’t Worry, Be Happy. Guy’s vocal range live is also very impressive especially in Died And Gone To Heave.

One of the two stand-out songs of the night was Big Bad World which he wrote for his gorgeous baby son Hudson. On the big screen behind the band showed photos of his son, together with his wife and himself. He doesn’t look at the screen because at the first concert they did he “totally bawled”. The other outstanding performance was Get Along when I got goosebumps. Along with its powerful message, on the big screen had the symbols of all religions and at the song’s end they came together to form a huge peace sign.

Guy demanded everyone to stand up and have fun, even having a dancing competition involving the whole audience, then choosing three people to come onstage and compete against each other.

Playing tribute to the beginning of his career Guy performed his very first single Angels Brought Me Here which hit the Number One position on the Aria singles chart in 2003. 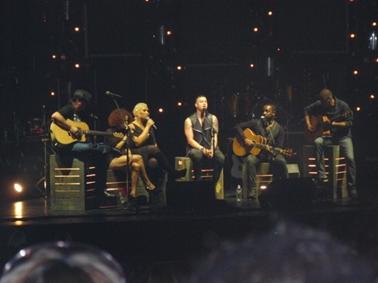 Guy and his band did an acoustic set where it felt like you were transported to a New Orleans bar. Then he showcased new material that he’s written overseas. One of his new tracks Alive gives a new sound to Guy. In the encore he introduced one of his new tracks Bed Of Clouds that featured Swift K.I.D which is a real hip hop track.

The evening ended up with Battle Scars and Like It Like That with everyone singing. Guy thanked everyone and said how The Palias Theatre is one of his favourite places to play at.

Thanks Robyn for letting me to use your photos!