THE AUSSIE ROCK SCENE has been a little dull, but there’s one band who have done awesome things in America after releasing their second album How We Survive. This is Grand Atlantic. 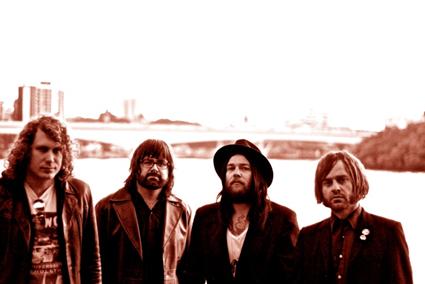 After taking a well-deserved break in 2010 when they had major exposure in America, Grand Atlantic have just released their new album Constellations on September 2nd. If you sign up for their newsletter on their site, you’ll receive a free download of their rockin’ new single Fresh Ideas In Home Security.

I was lucky enough to interview Grand Atlantic’s lead singer and a guitarist Phil Usher before the band head back to America. Thanks Phil for taking the time out to answer my questions! Thanks to Danae from Remedy Music.

Your new album ‘Constellations’ was recorded in abandoned psych hospital. First of all, how did you find it? And secondly, did that make the album darker?

We decided we wanted to record the album with producer Dale Cotton firstly. It was his suggestion to do the sessions in the Asylum. He’s done quite a bit of recording in unusual places around Dunedin and we loved the idea of going there to a historical location in the country and being away from distractions. It was actually converted into a backpackers about ten years ago, so some of the buildings are renovated and some are abandoned. I think the location definitely shaped the sound of the album in some ways. The room where we did most of the recording was the old stables building. It is made out of stone and probably well over one hundred years old. The sound in the room was incredible and definitely added to the finished sound of the album. I think this record was always going to be a bit darker because of the songs and their inspiration. I don’t know how much the location added to this aspect. It was just probably an appropriate place to record a group of songs like these.

The psych hospital is in New Zealand’s beautiful countryside. Was that itself off-putting as we have some awful images that we automatically think of when it comes to old psych hospitals?

There was definitely a heaviness at times being there. It is a sad place for many people and we couldn’t help but be mindful of this and try to treat the location with the respect it deserves. We did discuss the fact that we felt that it was good to be making something creative and ultimately positive in a place of such sadness. I think we were really aware of the gravity of the stories and events that had taken place there before us.

Take a look at their little doco:

Poison To The Vine sounds like Oasis. Is that a compliment or not?

I guess it depends on a few things. Firstly on whether the listener hears that particular reference and secondly actually has an opinion on Oasis. That might be what one person hears. I think there are probably a lot of things that it could sound like to different people. I’ve never thought of Oasis in relation to that song and I’ve had other people say Swervedriver or The Stems, so I guess it depends on your points of musical reference. I like some of what Oasis did musically, so I’d consider it a compliment. But then I think it sounds like Grand Atlantic…{smiles} People usually hear what they want to hear in your music from my experience.

You guys have had great success on American radio with several of your past tracks. How did they discover you?

It has happened a few different ways actually. We’ve had some songs featured on some high profile American TV shows like Burn Notice and Gossip Girl amongst others. We also hired a publicist to help us when we did our first tour there last year. Once you push the snow ball down the hill, things start to move pretty quickly from there on. There are a lot of really influential music blogs that have got behind the band as well which has been amazing.

Why hasn’t Australia caught onto you?

We’ve had some really great things happen here. People forget, but we’ve had songs on Triple J rotation and they’ve played stuff off our first two records but probably not in the past year. Australia is a very hard place to make music if you are a bit different or don’t fit the mould, plus it’s a very competitive market. I guess things are moving forward slowly for the band, and that’s totally fine with us. There is still a lot of mainline publicity given to Top 40 artists and musicians with major label backing and I think the focus for a lot of the general public is very much in this direction. It’s a shame because there are some amazing artists based in every city in our country and people don’t really have the time or inclination to search it out.

On September 2nd, your first single Fresh Ideas In Home Security from Constellations was released. What feedback have you received?

I think the general comments have been that our sound has changed a little and moved in a darker and edgier direction. That’s quite a different song for us based on our past work and I feel like that has been noted in the press. It’s only early days and we’re getting new reviews and things every day.

You’re returning to US in the not too distant future. What will you guys be doing there?

We’ve been invited to showcase at CMJ Festival in New York? {see www.musicfestivaljunkies.com/us-festivals/cmj-music-film-marathon/}, so we’ll be doing a few shows there and networking with people and bands. We’re also going to be doing shows in San Francisco and LA on the way home. There should also be time for some partying and guitar shopping too I hope!

Will you be coming back to Australia to tour?

We’re currently working on plans for the end of the year. I’m helping organize a psych festival in Brisbane for December as well, so it will be a busy time leading up to the end of 2011. I guess we’ll also be doing some supports and try to do another run around the country before the year is out.