WE MUST HAVE WATCHED this DVD at least five times if not more since Mum buying it around April. There’s only one word to describe David and that is DAG. He’s the typical Australian larrikin who loves to have a joke about himself and his family. 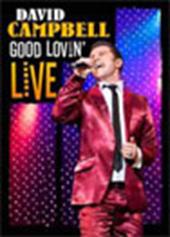 The Good Lovin’ LIVE concert was filmed at Sydney’s State Theatre during the Good Lovin’ LIVE national tour. David comes out in a maroon satiny suit that cries out flamboyant much, but this is all part of the act. David soon asks the audience, “How do you like the suit?” joking about the fact he was recently married, but you wouldn’t think it implying he could be confused as gay!

On backing vocals David has his sister Mahulia Barnes and they tell a very funny story about their Dad who is of course Jimmy Barnes. David recalls at his wedding how his Dad had tissues in his groin to hand around. They also said how every Christmas their Dad puts on the Tin Lid’s album and cries.

David had a very special guest to sing Yeh Yeh with him. Bob Downes comes out of the audience to join David onstage. Throughout the song they cracked jokes about their relationship, again playing on David’s camp ways.