AS A CHILD and teenager Vita Izabella (now known as Vita!) was a rock ‘n roll lover; knowing every Led Zeppelin song word for word. Later on her father introduced her to Bob Dylan and thanks to her older brother she became a huge fan of Aerosmith, Van Halen and the ultimate 80’s rockers Guns ‘n Roses! 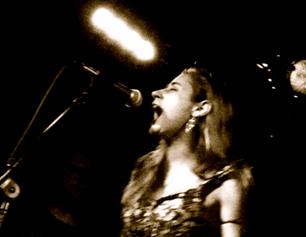 By surprise, at the age of seventeen she discovered she had voice with a high operatic soprano that came naturally to Vita! even though she never wanted to sing opera! She was “too rock” she says.

On her MySpace page this New Yorker has songs which highlight her beautiful voice with originals that range from country to folk. You Were Never In Love reminds me the rawness of Fiona Apple whereas Who You Gonna Run To captures Vita’s sweetness of her voice.

Thank you very much to Andy for contacting me through Gigs ‘n Interviews’ Facebook page to ask if I would be keen to interview this talented singer/songwriter and a big thankyou to Vita! who just did a gig on the weekend, so I really appreciate your time.

Listening to your heavenly voice it’s hard to believe growing up you absolutely loved listening Led Zeppelin and Gun ‘n Roses just to name a few.  Your music is so different to these bands. What led you down the musical genre you’ve chosen?

I think that even though my music doesn’t have the same rock edge as some of my favourite classic rock idols, the bluesy soulfulness remains a part of my interpretation of music and comes through in unexpected ways when I sing and perform my own music. The songs I perform are reflections of how I emotionally connect to the world around me. I think that’s what bands like Led Zeppelin and Guns ‘n Roses have in a common. There is a visceral energy that surges out from the music and touches its listeners. When you think of music in this way, as energy, it’s really all the same.

In college you discovered you had a voice suited to opera. Were you amazed?

I had always known that my voice was comfortable playing in a higher range. As my voice matured and I reached high school, I began singing classical pieces of music in chorus and local singing competitions.  It felt very natural to me.  But my heart still pulled me to sing from a different placement of vocal structure. I wanted to be able to roar at times, sing sweetly at others. I guess you might say that following an operatic path felt a little too technically strict for my artistic aesthetic.  But the study of classical music teaches an invaluable lesson in discipline.

Do you like listening to opera from other artists?

Yes. It’s a vocal style that I understand well and have a very physical connection to. I appreciate the art form and the technical training that goes into becoming a great opera singer. I also love many of the melodies that comprise the beautiful Italian arias.

Do you love or loathe Susan Boyle?

I think she has a lovely voice. I also think that she is inspirational to many talented musicians and singers that go unnoticed in terms of having a successful career in music. So it’s great that she was able to show the world her beautiful talent and be appreciated for it!

Which instruments do you play?

I started playing guitar to accompany my singing when I was about 15 years old. Although I had taken piano lessons starting at a young age, it was really the guitar that stuck as my primary instrument of accompaniment. It is very portable and I can be spontaneous in terms going someplace beautiful in nature, etc. and creating melodies and writing songs.

I also play the tin whistle. I picked it up on the Fires at Midnight tour with Ritchie Blackmore. Several musicians in the band played whistles and were very helpful teaching me.

What current rock artists/bands are you into?

I think “Grace Potter and The Nocturnals” is a great new band. I hear a really great integration of bluesy rock and folk in their music. The Black Keys also. They have some really great grooves and nice melodies. Another newer band I really like is Florence and the Machine. I think they have a great dramatic sense in their music. I’ve also been listening to Karise Eden. An amazing voice and success story. {I’m happy you’ve heard about our new sister of soul Vita!}

Who Are You Gonna Run To and Yer Lovin’sound very country. Do you like this genre too?

Absolutely. I have been hearing some really great country bands emerging on the music scene recently. I think I am also very influenced by some of the older country/folk singers like Emmylou Harris and Gram Parsons. These country influences really come through sometimes.  Yer Lovin’ was written by my good friend Stan Pyrzanowski of Cool Papa Bell.  I was thrilled when he asked me to sing on it with him. There is an honesty I hear in the voices of great country singers and storytellers that I try to capture in my own writing and performing like Who Are you Going To Run To. A great country song can even be a little rough around the edges and I think that can be a really great quality sometimes in a live performance or a recording.

You had an amazing experience where Deep Purple’s lead guitarist Ritchie Blackmore walked into the pub where you were doing a gig! Can you tell my readers what happened next?

Actually, it was a producer that heard me and recommended me to Ritchie. I didn’t actually meet Ritchie until the audition/rehearsal. That was really quite an experience for a young singer. Ritchie was everything you would expect a rock icon to be and great to work with. He knows enough about great music to extract great performances from his musicians.

It’s surprisingly some big record company hasn’t signed you! Have you tried?

I guess every musician hopes for success, but in retrospect I don’t think it has really been a focus for me as much as performing and writing. I would like to hopefully make a deal at some point that would help me get my music across to a larger audience.

Do you hope to release an album one day?

Yes. I’ve written and recorded a lot of songs and do distribute them individually via the internet and at my shows. I am working on organizing some songs into thematic groups and possibly packaging them as an album. I am als

o still writing and have been recording new stuff so I will have to wait and see what feels right for an album.

I wish you all my very best for your future Vita! and hope to hear more of you one day soon!