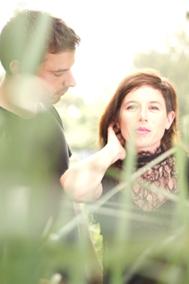 THE RESCUE SHIPS is a duo made up by the highly praised Elana Stone and Brian Campeau. Together they make folk sound cool. Elana’s brother Jake (from Bluejuice…how cool is that fact?) was the reason why The Rescue Ships was born as he had invited Brian over and Elana liked what she heard.

They have just literary released their single and video City Life and are currently working on an album. However, Elana would appreciate any suggestions on an album title!

Before you read my interview with the lovely Elana, you can watch the video for City Life below:

Welcome Elana! Please share with us how you and Brian discovered yourselves as very talented and unique artists to form The Rescue Ships?

Hi Jacqui! My brother Jake was indirectly responsible for bringing Brian and I together. He gave me Brian’s album Two Faces and told me I was going to love it and I did. Jake told me that Brian sits in a little room and makes weird beats. When I heard that album I immediately got Brian’s number and texted him. It was the best thing I had heard in a long time and I told him as much. We did a gig together soon after that at Luna Park. That was the beginning of the Rescue Ships.

You’re currently working on a new album which will feature some of your musical friends. Do you care to name-drop (even if it’s just one)? 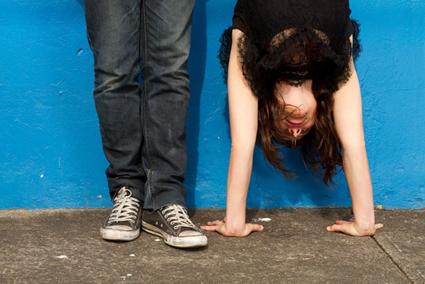 Pretty much everyone on the album are friends of ours that just happen to be totally amazing musicians. They are not necessarily fame monkeys. We’ve got the beautiful Gian Slater from Melbourne singing on one track. She is one of the best improvisers I have ever heard.

When do you think the new album will be out? Do you have a title for it yet?

The album is due out in October. No title as yet. Any ideas? Maybe we’ll call it HELP! Has that already been done? {laughs loudly}… yes.

Your new single City Life is really kooky (in the good way) and catchy. What’s your songwriting progress for you?

I wrote s Life’ on a romantic summer night in a Victorian terrace in Redfern. I wrote it on the guitar but I’m not a guitarist which makes me AWESOME. Actually, I thought it wasn’t very good so I shelved it for about a year before showing it to Brian one day. He really liked it and so, City Life was born!

Do you take turns in creating the lyrics and melody and vice-a-versa?

We wrote quite a few of the songs together; lyrics, melody, everything. We went on a writing holiday in New Zealand and came up with a lot of the songs there in the back of the campervan. There is even a song on the album called Campercar. Others we just write on our own and bring to each other.

I have to ask… Who does the cute baby belong to on the cover on On The Air?

That’s our drummer’s baby. We were actually trying to get her to cry for the picture but she wouldn’t. She is one of the best looking kids I’ve ever seen. I hope she doesn’t grow up and try to sue us for exploitation.

Your B side track to City Life is the loungey Joan where your voices mold together perfectly and the track is all about creation. When Joan was coming together, did you have a sense of creating something special and different?

I dreamt the riff from Joan and recorded it as soon as I woke up. It took us a while to get lyrics for it. We were in Dunedin (NZ) and we met Joan. She was living in a shipping container. I like that you felt it was about creation. I can see how you came to that conclusion but in many ways it’s about destruction. I guess they’re different facets of the same coin.

Speaking of different Elana, on Good News Week you did a version of ACDC’s You Shook Me All Night Long with ONLY an accordion! How in the earth did you come up that arrangement?

I think it was out of necessity that I did that one on the accordion. It was just what I had with me at the time. For the record, I freaking love the accordion.

Jake Stone from Bluejuice is your brother! I bet growing you two made up naughty songs?

Not really. My sister wrote some funny songs like Peas Are Bubbling which is pretty self-explanatory but the lyrics are:

And there was also Mr Pishy Under The Sea, which I believe was about a vagina living under the sea.

Back to The Rescue Ships, once your album is released, will you guys be touring?

YES! In the meantime, here are our City Life Tour dates:

Thanks Elana for your wonderful interview! All the very best for The Rescue Ships’ album! Also as always thanks Will from Heapsaflash! 😉