DESPITE THEIR NAME, The Supernaturals are just an ordinary talented bunch of men who happen to have disabilities. 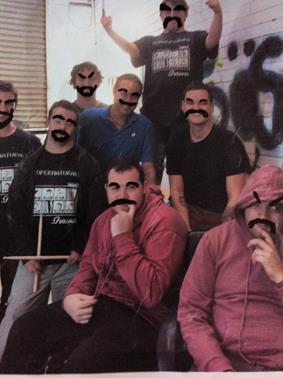 As you can see by the photo, The Supernaturals don’t take themselves very seriously. The title of their latest EP “Shoes Have Gone To God” is a fine example of their larrikinism and the fact they’re not afraid to point out the fact they have disabilities

Thankyou Pete for contacting me through Gigs ‘n Interviews’ site. Here’s the outcome of our little chat.

Howdy Pete! Thanks for getting in touch with me. Can you tell us how The Supernaturals got together?

I think the year was 2008 (before I had started working with these guys). These guys had been part of a day service that catered for young people with disabilities. They decided that starting a rock band was going to be a great idea…and look, it’s 2016 and it’s still going strong! I think the band name came about because the TV show SUPERNATURAL was big at the time.

What is the age range in The Supernaturals?

Our newest member Nick who has started playing guitar with us this year is a fresh faced 19 year-old who’s just out of school. The rest of us feel ancient. Anthony our bass player is our oldest (and he says experienced) at the tender age of 30. The rest of us are in our mid 20’s.

Can you describe the separate bandmates’ talents?

I’ll introduce them to you… On Lead Vocals we have Aaron and Mark. Anthony on bass guitar and backing vocals. On guitars we have Nick and myself…my name’s Pete. And lastly on drums we have a guy called Paul. He’s earned himself the nickname , ‘The Human Metronome’.

I love the irony of your title EP “Shoes Have Gone To God”. How did you guys come up with the title? 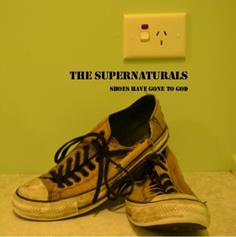 Well the actual song called ‘Shoes Have Gone To God’ was written quite some time ago. It was one of those songs that came together quite randomly (like most of our songs) I think the song was literally inspired by the fact that most of our shoes had seen better days. In fact the EP cover has a picture of my shoes and I think they have since been placed in the bin. So once we had recorded the EP, that title just seemed to fit the chaos that you could hear! Perfection.

On Facebook you said you were writing a song each week. Where do you guys get your inspiration from to write songs?

I’ve really noticed these guys love tapping into their creative sides. Each Friday we get together and jam. During these jams we can’t help ourselves. We usually get creative and start writing a song. I think the most exciting part of songwriting is starting with a blank page and having a full page of ideas by the end of the day. We’ve written close to ten songs this year, so we’re thinking of recording them at some point soon.

“Don’t You Remember” sounds like a typical Aussie track. Did the songwriter write it with a particular political issue in?

From memory the guys wanted to write a song about the city. But the lyrics started heading down a strange path. Lines like ‘People in the city, got no place to go. Everyone’s feeling shitty, except me‘. That song was the first time Aaron our lead singer found confidence in himself to be the lead singer, so writing that song felt like a big achievement at the time. Now he performs with ease! I doubt anything political was being written about, but it’s great that it could be interpreted that was.

Watching the video on Facebook you can see that the lads love performing live. Will The Supernaturals be doing gigs?

No dates as of yet. We had quite a few gigs late last year so the start of this year has been pretty quiet on that front. But definitely hoping to do some at some stage in the near (ish) future.

Thankyou very much Pete for your time. It’s been lovely to chat to you. All the very best for your future!