WHEN ADELAIDE TWO girls and two guys found they had the same attitude with each other, the rockin’ The Babes formed. They wanted to play good-old rock, no of this soft-rock that’s adored by mainstream media!

If you watch The Babes’ video for their underdog anthem Rock ‘N’ Roll Gang, you will instantly gage they are comfortable and proudly unapologetic with their style. 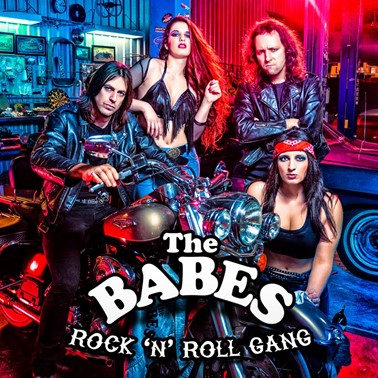 Drawing from their influences including Black Sabbath, Skid Row and Kiss, The Babes are proud of their uniqueness. Their love of motorbikes and cars which are an important incorporation into their music and gigs. The drummer Moni Lashes’ drum kit was designed to have a “Harley Davidson front wheel and fork attached to my kick drum”.

Even though The Babes are receiving attention from US and Japan, the group remain passionate about supporting local independent music stores that supply their instruments. They’re about the headline the Miss Ink National Tour 2014 which kicks off next month! (see below for details)

Thankyou Moni for visiting Gigs ‘n Interviews on Facebook! Listening to The Babes’ music, I immediately thought of Black Sabbath and other old-school good rock bands! When you formed The Babes, were you influenced by these bands?

Thanks so much for having us! We are stoked to be part of your amazing list of artists! Yeah, we really are heavily influenced by the old school gutsy bands like you mentioned Black Sabbath, moreso the commercial side of their music like the catchiness of Ozzy Osbourne melodies. We admire the bands that have both the songs and put on a show as a package like Kiss, Black Sabbath, that’s what we aim for each time we play a show.

Wow, The Babes were interviewed by a Japanese journalist and Donna answered in Japanese, so I’m presuming you guys are big in Japan. How did that amazing opportunity happen?

Yes, we were interviewed late last year by a Japanese correspondent for a Japanese TV station, which promotes hard rock bands. We’ve been pretty fortunate that The Babes have managed to form quite a large gang (our official fan club) in Japan, specifically Tokyo. We think it’s pretty wicked, because we are just four Adelaide-born rockers, who never thought we would be known around Australia let alone Japan {laughs}… Donna D (our lead guitarist) and myself (Moni Lashes) are sisters and also studied Japanese a little during school so when we were approached for the interview, we crazily suggested maybe trying to speak to the host in Japanese, which was funny for us, but paid off with the fans.

You guys definitely aren’t afraid to conform to a nice soft-rock, pretty band! You’re proud of being rough and tough. When you all guys met were you like “yeah you rock, you’re cool”?

The whole “soft rock pretty thing” has been done and overdone. Our mentality is that just because a girl is in a band doesn’t mean she has to be butch, or dressed to the hill like a Barbie doll miming on a bass guitar… Donna and I are a different breed of girl I think, we are ladies, but we won’t take any nonsense from anyone, we are just there to play rock n roll, ride motorbikes, dance at jukeboxes and party. When we auditioned both Mr Hell (bass guitar) and Johnny Snakes (lead vox) we all just knew that we were on the same page…we were only interested in making sexy, gutsy rock n roll. We are a band, but we are also a gang, loyal to each other and always have a great time together on and off stage.

You say in a video it’s “All about sex, drums and rock ‘n roll baby”. What a great mantra for life! What was it that attracted you to being a drummer?

Yeah that quote was from one of my drumming interviews with U.S Drum Talk TV recently {laughs}. Drumming is my life. I started playing learning theory when I was about five years-old with my Dad giving me lessons at home. He taught me the essentials like Led Zeppelin songs and theory. Drumming is my therapy, without drums I think I’d go crazy… I recommend for anyone to take up drums as a wicked activity, and stress relief. {laughs}

Do you wish there were more female drummers around? (Personally, I think it would be awesome to bash the absolute crap out of something for a living!)

I’m not sure if I wish there were more female drummers around, that’s a great question to get me thinking though! I think what I’d prefer is for female drummers to get the recognition they deserve, instead of having to work doubly hard only to receive half of the recognition, purely based on sex. I wanna live in a world where it’s not even a reference whether a great drummer is female…it’s only whether the drummer is awesome or not. But in the meantime I just focus on my own drumming in The Babes and becoming the best drummer I can.

It’s admirable that you buy all your drum kits from independent music stores! I guess you want to support those little stores which sadly get forgotten?

When we write a song of about supporting the underdog in any situation, we live it in real life…I only shop at Derringers Drum Shop, they are the underdog, but the service is unbeatable, and that means more to me than saving $2 or $3 here or there at their national chain competitors.. It’s my lame way of sticking it to the man in terms of drum purchases. Hehe.

At gigs, you have your unique drum kit which is partly a Harley Davidson (I hear my male readers drool at this very moment). How was this made possible?

Ah yes, my kit. So I use Pearl Export Select series, which has a custom made Harley Davidson front wheel and fork attached to my kick drum. The cool thing about it is that The Babes manager, Don, and myself made it at home, and even made the wheel spin via secret remote control behind my kit. I also have the front headlight which lights up. Just recently I’ve attached an exhaust pipe which doubles as a real smoke machine from the floor tom, so my whole kit is literally a Harley drum kit, and one of a kind in the world. It just takes our stage show to another level and the crowd loves it.

Oh you have a gorgeous car! Can you describe it to Gigs ‘n Interviews’ readers?

Cars will be the death of me. All of The Babes love our classic cars which is what a few of our songs are about such as Taking Over, Harley Girl and Ride It. Mr Hell drives an American 1971 Ford Galaxie, Johnny has owned classic Aussie muscle cars, Donna D works on motorbikes with me, and my everyday car is a 1966 Chrysler VC Valiant. It’s my pride and joy and if you’ve ever seen that old movie Christine”, my valiant can be the devil like that at times…

How does it feel to be the headline act for the Miss Ink National Tour 2014 starting in April?

It is incredible! We were privileged to play as the headliner act at the Grand Final in 2013, and were honoured that Miss Ink organisers asked us to headline the tour this year. The tour starts in April, it’s our first time playing along the east coast of Australia, and we just can’t wait to get on the road in the Valiant and play to our gang on that side of the country!