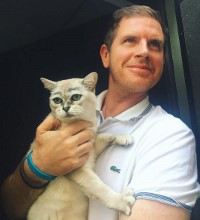 SAM MAC IS one of the good guys and what you see on Sunrise is what you get in “real life”. He’s actually a lovely guy who
just happens to be a cat lover (win/win for myself and tens of thousands of fans around Australia and internationally. If you go onto his Facebook and Instagram accounts you’ll get bombarded by pictures of his much-loved and spoiled cats Coco and Catra. In fact, Sam is a “Sambassador” for Sydney Dogs And Cats Home who are urging people to donate to ensure their ongoing care for misplaced cats and dogs waiting for loving homes.

From ayoung age, Sam’s future of entertainment was very apparent as he threw mock-up productions for family, friends and animals. He was always putting together videos for his parents to watch, which funnily he called “The Fake Times”.  (Sam wants to emphasize there’s no affiliation with the 2017 “fake news”).  Sam now involves his fur babies in his videos; one of his latest videos is of Sam serenading an extremely unimpressed Coco with the song Angel. If you watch the video, you’ll see all Coco wanted was food as cats do, ignoring Sam’s efforts completely.

I was lucky enough (or as Sam would tell you “persistent, kind of stalkerish”) to chat to Sam. Honestly, you couldn’t meet a nicer guy with a huge heart.

G’day Sam! How are you? Thanks for replying to my message and not thinking “She’s a freaky stalker!” You’re a natural-born entertainer! You’re a comedian, singer/rapper, guitar player….and you’re a cat person! Which side of you came out first?

I think if I had to boil down what makes me tick to a single word, that word would be creativity. Creativity excites me. That’s been the case since a very early age. My parents used to get sick of me constantly making videos and audio recordings of them for my own imaginary TV and radio shows. I created my own newspaper as a child called “The Fake Times” which was kind of satirical (but that’s probably giving it too much credit) and basically revealed salacious info about people we knew personally. I’m lucky “The Fake Times” isn’t being circulated today in 2017 as I would undoubtedly be sued for defamation.

As well as being Sunrise’s weatherman, you have done breakfast radio, so I take it you’re a morning person?

That’s the crazy thing. I’m actually not a morning person at all. I’m a night owl. However, there’s something about that red light going on (whether it’s radio or TV). When you’re live to air, a certain adrenaline kicks in and the time of day is irrelevant.

Your many interests include singing, dancing, comedy and sport, I bet as you were growing up, your parents were constantly inundated with impromptu concerts, jokes and enthusiasm for sports. When you were young, were your family guinea pigs to your talents?

One hundred percent. So were my friends, teachers, strangers, uncles, aunties, animals, etc. It’s just something I’ve always done. It’s what drives me. I’ve always had a vivid imagination & I get a real buzz out of making things. I’m very lucky that in high school I had a few teachers who embraced this passion and allowed me to make video productions as
opposed to traditional written assessments. I can be very persuasive when I have an idea. Even if I wasn’t doing this as a job, I still feel I’d be creative and making things as it’s a part of who I am.

You’re talking to a big soft animal lover especially cats and dogs. I loved the video of you singing to one of your cats. It was so obvious that they weren’t impressed as you were interrupting them from eating! Where did your love of cats originate from?

{Sam laughs} I love all animals. I feel that sometimes they are taken advantage of. It’s important we give a voice to the voiceless a stand-up for them in certain areas. As a child we got a Cat named “Tigger” from the markets for 50 cents. Two weeks later I accidentally dropped him and we had to pay hundreds of dollars in vet bills to fix a broken leg. I think I’ve
felt guilty ever since. 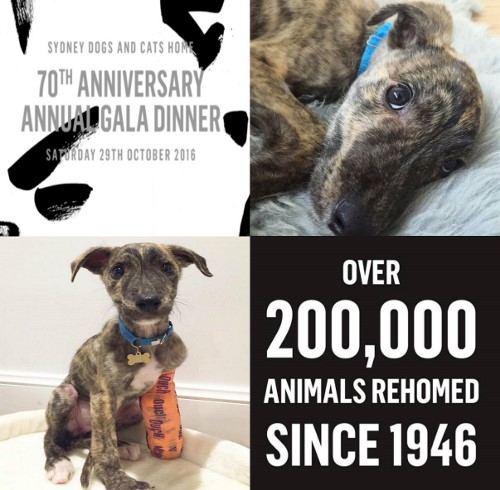 ents, raising money and spreading awareness about rescue pets. They are amazing. I truly believe that an animal knows when you’ve opened your heart and given them a second chance. They will repay you a million times over. Plus, to put it simply, Cats are funny. {Jacqui says “I couldn’t agree more!} They’re delightfully nonchalant. Everything is on their terms. {Agreed} They amuse me.

You receive lots of pressies for your cats! What’s been the best and weirdest things you’ve received for your cats?

I recently received Cat Hats from Japan. Legit. They’re still at the office but I will give them a try on Coco and Catra. A viewer who now lives in America is about to send me a brush for my Cats that you apparently wear on your tongue. I feel that may be crossing the line. But will probably give it a try.

One of your admirable qualities is when you make children who have had a tough time smile and/or laugh. Do you think this was one of the reasons why you took the Sunrise gig – to change peoples’ lives?

Thank you. That’s a lovely compliment. No, it’s not why I took the job. So many elements of this job just come naturally. They just seem like the right thing to do, or the right way to behave. No one will get it right every single time, but I believe if your intentions are true and authentic, that will shine
through in the end. When it comes to sick kids, they’re some of the most rewarding experiences I’ve had in the role so far. I try not to treat them as sick kids. Some of these kids may not even understand what’s wrong with them and how to get better. But what they will understand is how to have fun and muck around. Even if it’s just for a few hours, it’s escapism. It’s so important to let kids be kids. I’m very fortunate to get that opportunity, to spend time with special children and their incredibly strong families.

Thanks so very much for your time Sam! You brighten up millions of peoples’ lives, even if that’s through their TV’s! I wish you safe and fun
travels.

That’s very kind. My pleasure Jacqui, and I wish you the best of luck for you future and Gigs & Interviews.