JAIMEN HUDSON IS extremely passionate about educating as many people he can by capturing the beauty of the ocean and some of the planet’s stunning places. 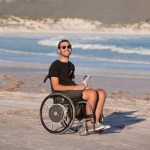 Jaimen’s earliest childhood memory was being in the ocean with his family, like most Aussies! His parents were diving instructors so Jaimen’s teenage years were always spent diving, skateboarding and surfing. At the age of eighteen, his life went on a different path when he became a quadriplegic due to a motorcycle accident, but Jaimen soon found his passion. Seeing he couldn’t physically get close to the ocean, he discovered he could still get close the ocean by drones.

Drones have enabled Jaimen the most breathtaking videos and photos of whales, the ocean and the Australian coastline and natural wonders. I urge you all to take a look at Jaimen’s site and Instagram and I can guarantee you will sit there for an hour in awe at how beautiful and majestic Jaimen’s photos and videos are.

After appearing on Weekend Sunrise I contacted Jaimen asking if he would be willing to chat with me. What I received was indepth answers about educating people about taking better care of the planet, especially the reduction of rubbish and plastic bags.

G’day Jaimen! Thanks very much for chatting to me. Watching you on Weekend Sunrise, it prompted me to check out your photos and videos on your site. You’re one very talented young man! What draws you to the ocean?

Thank you so much Jacqui. I really appreciate that. My family have operated Esperance Diving Academy since 1983. Seven years before I was born so from the get go the ocean has played a major role in my life from the get go. I always wanted to be on it, near it, or in it.

After your motorcycle accident, was photography the first thing you wanted to explore as your career?

What or who suggested the possibility to use drones for your stunning photography and videos? Has assistive technology enabled you to control your drones or can you use average controllers?

For me it all came about in December 2014. Our business Esperance Island Cruises was hired to do a job for a gentleman wanting to go and visit Lake Hillier on Middle Island. Lake hillier is an incredibly beautiful pink lake located on a very secluded island 129kms away from Esperance. Well little did I know at the time but this guy was actually the chief marketing officer for DJI. Easily the world’s largest and most popular drone manufacturer. Once he showed me the footage he had captured and how cool the perspective it gave you was I was hooked right away. I was wary of purchasing one at first as I didn’t know if I would be able to fly it with my reduced hand function. Eventually after watching many YouTube reviews I decided to bight the bullet and purchased a Phantom 2 and coupled with a GoPro camera.

The setup I use is completely standard. It just took a while to get used to. I currently operate a DJI Inspire 2 drone.

One of your all-time favourite photos you’ve taken is Head Of Bight which is Great Australian Bight Cliffs from South Australia. How do you discover these beautiful places? 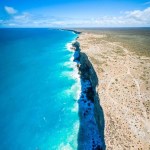 I was lucky enough to spend five days down at the Great Australian Bight working for Greenpeace. This was when I captured the image you are speaking about. It is such a unique and beautiful place. We were on the cliff edge for the majority of the time and the only people as far as the eye could see.

If I wasn’t contacted by G.P it probably wouldn’t have been a place I would have travelled to as caravanning and travelling in a vehicle for extended periods can be difficult for people in a wheelchair.

I love your video Part Three Of The Bight with three whales including one baby whale. It’s beautiful! Did you follow the pod of whales or did they just turn up?

Thank you very much. There were honestly countless interactions like that. The Southern Right Whales are at the Bight to rear their young so they don’t really move too far. They swim very slowly just a short distance away from cliffs. It really is a spectacle.

Greenpeace have used your stunning images. Do you hope after seeing your beautiful photos and videos, do you hope people will start treating the planet better?

I think the over whelming majority of people have good intentions for the planet. I think we just need better education around what us as humans are doing that is effecting the ocean and marine life that call it home. I watched “The War on Waste” (the ABC’s program on our throw away attitude) and I was honestly blown away. I had no idea things were so bad.

{I believe} it should be compulsory in school to watch programs like that and the government should make a stand against disposable plastics. I try and push to work each Saturday morning and my Mum and I collect rubbish that people have just throw out their window. 90% of it is almost always recyclable. If it doesn’t get collected it will likely end up in storm drains and then make its way into the ocean.

I read a stat the other day that said by 2050 the plastic in the ocean will collectively weigh more than the fish living in it. That is a scary statistic and one we all need to be aware of and work together to do something about.

Thank you very much Jaimen! You’ve been enlightening to chat to and hopefully your words have made people think about their responsibilities to caring for planet Earth.