THE PANDA BAND ARE what I call inspirations. They are an extremely proud indie band who own their own label Bam Boo and even offering their new single The Fix as a free download from their website. Player 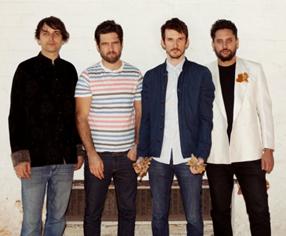 Originally from Perth, the band now touring America while writing for their upcoming album Charisma Weapon. Each member has shared the songwriting role for this new album too.

The Panda Band are excited about coming home for their Charisma Weapon national tour, but before they get going they kindly sat down and answered my questions.

Thanks to Danae from Remedy Music for suggesting I interview the guys! And of course thanks guys for answering so quickly!

I know you must have been asked this hundreds of times but what’s with your name?

Pandas are lovely cuddly creatures much like ourselves, they eat all day and are black and white like yin and yang…the balance of life…we like pandas we were nearly The Amanda Band.

You’re offering your latest single The Fix as a free download from your website. As an independent band it’s a pretty unselfish move. Why did you decide to offer it as a freebie?

We want people to hear it, if they like it they can buy a t-shirt and come see us live, then we can make more music and give it all away.

You guys have been touring America while writing your upcoming album Charisma Weapon. Describe that experience to us.

It was amazing, we bought a van and drove around the country playing shows. We stayed in Mississippi for two weeks writing and recording parts of Charisma Weapon, we stayed in small shacks, each one had its own piano. We also played lots of stick cricket and made a horror film called The Mississippi Brownfoot. {smiles}

On Charisma Weapon each member got to write tracks?

When it came down to choosing the tracks for Charisma Weapon was it difficult to choose, trying to be fair? Not at all, a good track stands out, we all know when a song isn’t ready and we work on the tracks so much that when it’s finished…IT’S FINISHED!

Which artists/bands have influenced you?

What is it like having own record label Bam Boo (very clever name by the way)? What are the advantages and disadvantages?

It’s great, it gives us control of what we want to do with our music and the pleasure of signing a band if see potential.

Over the past year or two there has been a real embracement of Indie music in general. Why do you think this is?

{The} internet has helped people to get their music out of their bedrooms, record companies can’t keep up and people can buy music directly from the artists’ website; independently musicians can now make a living if their product is strong enough.

From the end of July to September you’re touring Australia. Are you looking forward to playing in front of Aussie faces again?

Oh yes, life on the road has been missed and we are looking forward to sharing what we have been doing over the last few years, there a are new band members, new songs and new party animal instincts.

What’s the best thing about being in a band?

What do you ultimate goal as a band?

To be heard by as many people and animals as possible.

Birds Of Tokyo Flying To Success