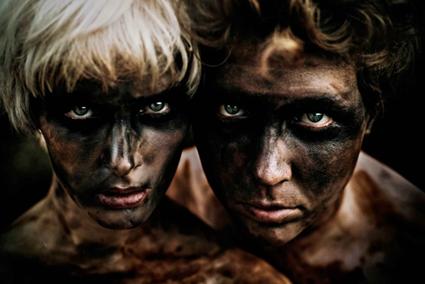 Tegan and James Voltaire have had great success in Australia and overseas featuring at major festivals such as Parklife, Summadayze and Good Vibrations as well as supporting Ladytron, American Walter Meego, a New Zealand act So So Modern, Dukes Of Windsor, Lost Valentinos and Art Vs Science.

In October they’re releasing an EP following up to their May 2010 EP, but like myself you may have seen the first single Animalia on Rage in recent months. As you read this interview with the twins, you’ll discover how music sassy they are.

Many thanks to Will from Heapsaflash for organising this interview.

How did you come up with the idea of the sound of Animalia?
We wrote Animalia on Christmas Eve 2010 and demoed it that day in our old home studio. It all kind of fell around the main vocal hook – the “oh-oh-oh” bit, which Tegan came up with. The song just came out of us really quickly from there. I think it was the right key, right time, sitting in front of the right synth, with both of us in the right mood. Then we took it into the studio with the rest of the band and arranged it. It actually took ages to record because we all spent so much time tweaking small elements here and there. It was being written and re-written up until and during the mixing stage even.

The video for Animalia is very controversial. Where did the idea come from?
Ben Young, the director, came up with it all. We can’t take much credit for the initial concept, we just sent him the song and said “what does it make you think of?” and he wrote out this story. Is it controversial? It doesn’t seem controversial to us. We were planning to do something really realistic and gorey, so maybe it’s better we didn’t. Or maybe we should have. I think music videos are the last place filmmakers can do challenging, abstract work and still be seen by audiences. Now that music videos mostly live on the web, filmmakers are freer to explore.

Listening to your tracks, it sounds like you were children of the 80’s. Have the 80’s been influential to your approach to music?
We were really young when the 80’s ended, so neither of us remembers the 80’s. I think the 80’s elements in our music come mostly from the equipment we use – old synths, old drum kits and drum machines, old mics, old compressors and reverbs, old everything! We’re not trying to emulate something from the past – those instruments just sound good to us. We do love old italo and disco music and our remixes are more consciously along those lines because they’re meant for dancing, but Animalia just sounds old because we use so much old stuff.

As brother and sister did you used to sing tracks together in your bedrooms?
Yeah, a lot of our first songs were written on Saturday mornings in a bedroom, but we were already in our late teens/early twenties when were started writing music together. It’s a really recent thing.

Do you class yourself as a dance or pop duo?
I don’t really know. I think most artists find it very dull when people classify their music as one thing or another. We don’t write music intending it to be played by DJs, we write it to be played live and listened to, so I guess I’d choose pop over dance, but it’s all the same to us.

Your debut EP is due out in October. Very exciting stuff eh?
Yeah, we’re definitely excited about it. We’re throwing a big launch party in the city with a bunch of bands, DJs and performers. It’s going to be a memorable affair!

Once your EP is released, what are your plans?
We’re already working on another EP to follow this one. At the moment the idea is to call it Remus so it can kind tie in as a continuation of Romulus. We’re going to do a couple of trips to the east coast for some shows, and we’ll play a few shows in Perth, but at the moment we’re going to keep focusing on writing, recording and remixing.

Iva Davies – A Man Of Talents

Katie’s Travels With The Captains