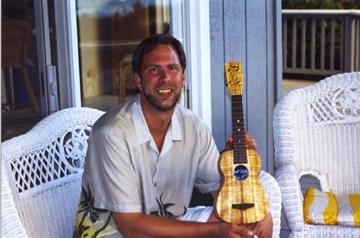 His instrumental music verges from rock to electriconica to quirky. It can take you places as your mind drifts. Can You Believe could be the theme for another X Files movies as it is very atmospheric and spacey. Temple Of Heaven has a middle eastern side which is so relaxing that you just want to doze off. Ensenada has this quirky Austin Powers sound to it that leads onto a psychedelic organ. You just have to listen to the end as it intrigues you.

There’s some real Pink Floyd influences in BurningWycke’s music so all you 70’s music fans out there head to www.myspace.com/burningwycke.

A big thankyou to Mark for dropping by Gigs ‘n Interviews and asking for me to feature you. It’s been a great pleasure to meet you!

Here’s my interview with Burningwycke:

You are a truly gifted man as you can play electric guitars to the keyboard as
well as mixing. How did you become so talented?

First, thank you for phrasing your question in such a kind way! The truth is that necessity is the mother of invention. I couldn’t get anyone interested in my music locally, so I was put in a position where I had to do it all myself. I got kicked out of bands regularly for playing like I do! It was either do it myself or not do it at all, really.

Which instrument do you enjoy playing the most?

Whichever one I’m playing at the moment! {laughs} I’m probably a better bassist than a guitarist, and I’m better at those than the keyboards. I play keys just to add some variety and colour.

BurningWycke is a really unique name. How did you come up with it for your
one-man band?

Glad you like it! I actually came up with that in 1982 for a band I was forming that never panned out. I’m stunned nobody’s nicked it. I still Google it occasionally and the only references are to me, so I caught a break there!

When did you decide to build your own recording studio?

Well, to begin at the beginning; I learned how to play the guitar to emulate my heroes, like most folks. Then after I learned a thing or two, the next step was to start putting things together of my own. Then it was time to round up some mates and go to a recording studio and blow a few hundred dollars to record the song for posterity. See, back in the day, only mega bands like Pink Floyd had private studios. This proved to be very expensive and tedious so starting in the early 1990’s I started putting bits of gear together and by 1994 I had enough to start doing demos and by 1998 I had enough gear to record the ‘Crop Circles’ album. So again, it’s a case of me doing it myself rather than not at all.

Everyone thought I was mad, of course! {laughs} I do think I’m done with albums as such, though. People don’t buy music that way anymore. iTunes has made it possible for people to buy individual cuts so they don’t have to buy a ten song album to get the one or two songs they really like. I’ll probably just add new songs one or two at a time on MySpace and if any of them spark an interest I’ll put them up on iTunes. It takes me ages to make a record anyway.

Which artists have you worked with?

Nobody famous, I’m afraid… I did some remixing of some material from Sibyll Kalff (Germany), but the rest has been local or file swaps with people in other places. I am always open to collaboration though.

Who would you love to work with if you could choose anyone in the world?

Well… it’s tough to narrow it down to just one, so I’ll give you a very short list; Jerry Garcia, Maria Mckee, Pink Floyd, Sir Paul McCartney, Phish, and Butterfly Boucher. That’s a pretty well-rounded bunch to start with. (smiles)

Where did you come up with ideas for your Temple of Heaven track?

I’ve always loved the sound of the twelve-string acoustic guitar. On this song I used an alternate tuning (open Dsus4 for those who care about such things) it really kind of wrote itself, you know? [I’m] just trying different things almost like a ‘stream of consciousness’ concept.


Your music is very meditative. Do you practice meditation?

I do. In fact I’m an ordained Buddhist. I get a lot of positive feedback from the New Age types which surprises me a little. I thought it was too ‘rock’ oriented for them, but sometimes the artist isn’t the best judge of their own art.

You don’t agree with (American) Idol. Would you mind briefly explaining
why?!

Briefly? I could do an hour on this! {laughs} First, it portrays an obsolete model of how the music business is NOW. They want artists to believe that the only way to ‘make it’ is to have a handful of industry insiders grant them permission. Second, all the contestants sound alike. This is because major labels want to move product. They don’t give a toss about art. If they don’t think you’ll sell three million copies of your debut album – they aren’t interested. If it wasn’t for companies like TuneCore which allowed me to form my own label and get on iTunes, I wouldn’t be here now talking to you, and by extension, your readers. I have as much regard for ‘American Idol’ as they have for me…none! End of rant. {laughs}

Do you write your music with your listeners in mind or do you create something
just for yourself?

Until 2008 I didn’t HAVE any listeners. I always believed that the world is a big enough place that SOMEONE would like my music for what it is; the meandering, rhythmic visions of an aging Hippie/ baby-boomer who thinks music still matters enough to dwell in obscurity for playing it his own way. While I don’t go out of my way to alienate people, I do hope enough folks ‘get it’ to allow me to continue. A lot of the feedback I get is from people telling me to keep doing what I’m doing, so as long as I can touch somebody’s soul – it’s all good.

What was the inspiration for Can You Believe?

That was kind of me trying to channel the band Yes. {laughs} I dunno, it seemed like a good idea at the time, and mind you, there’s some worthwhile stuff in there but I think I let things get away from me a bit. The bloom is off the rose, you know?

Thank you so much, Jacqui! It’s been a pleasure to talk to you. I hope your readers enjoyed our chat as well! Take care, Australia!

Boy & Bear Have No Limits