PRINCESS ONE POINT FIVE is a Melbourne group who love contradictions. Their lead singer has a really sweet voice but their tracks are poppy and yet are rock songs at the same time.

Princess One Point Five have been around for several years. Their career highlights include having one of their tracks being played during a Gossip Girl episode and another for a Medium trailer during the Superbowl which was huge obviously for the trio.

You can listen and watch some of their tracks on http://www.myspace.com/princessonepointfive and if you are in Melbourne this Sunday, you can see them at St Kilda’s Pure Pop Records (221 Barkly Street, St Kilda).

Thankyou to Sarah-Jane for swiftly replying with her answers.

Where did the name Princess One Point Five come from?

A lovely older Lebanese man gave me the idea when I was working for his family stacking shelves at a supermarket. He used to call me Princess because Sarah was the wife of Abraham and loosely translates as Lady or Princess. He tried to teach me some words in Arabic (but I have a memory like a sieve) and I helped him with his English. One point Five is really kind of lame- it’s my height in metres. Over time P1.5 has come to mean different things to different people.

Everyone in P1.5 plays several instruments. Does this make the recording process more collaborative? Who writes the tracks?

This whole thing started out as a side solo project for me, but after a while and quite accidentally Richard and I teamed up and the songs I was writing sort of evolved to be more for a band than a solo artist. He’s become just as possessive about my songs as I have so it’s inevitable that the recording process has become more of a collaborative effort. Because I still think of them as “mine” we do argue over arrangements sometimes, but Richard’s Richard-ness really brings out the best in the songs. And a few of the tracks on the new album we wrote together.

When it comes to playing live, we don’t really have a set band so it’s more or less whoever’s available, plays. We’re just lucky that Ben plays guitar as well as he plays bass, and that Andy is pretty well brilliant at whatever he picks up (bitch). It’s always evolving… who knows who will join us for the next album.

Actually I’m working on getting Lady Gaga to do backup dancing but she won’t return my calls.

Really like the track You. It’s very rocky with Sarah-Jane’s sweet vocals. Do you consciously set out to blur the lines between rock and pop?

Absolutely. We love contradiction in art. It’s the best way to say what you really mean, as it “walk softly, but carry a big stick”… Actually, it started as a practical thing. No matter how much I wish differently, I have a very pure, sort of cut glass quality to my voice so I was never going to be Courtney Love or PJ Harvey- doesn’t mean I can’t play loud music, though.

I think the contrast makes us interesting- and you can often be more effective with rock songs when you have contrasting and sometime contradictory sounds and textures.

You’ve had a track played during a Medium promo in America. What song was that and did you all do a happy dance when you found out?

With Light Is Hope from the very first P1.5 album, At Long Last.

To be honest I think that mostly I was distracted by Patricia Aquette. She’s a criminally handsome woman. Actually, the biggest spin out was hearing from my boss that it was screened at the superbowl in America. Nearly fainted. It was hands down the best excuse to leave work early.

When does your album What Doesn’t Kill You come out?

That puppy is well and truly out of the bag (not that I would ever put a puppy in a bag. Um.) {oopps! Sorry guys!} It came out on the 11th of June through Pharmacy Records/MGM on CD and through iTunes, etc, and-so excitement I nearly vomited- we’ve just got a stack of vinyl copies of it. Neat, huh?

What can people expect who plan to see shows during
your national tour?

Something different every night.

You’re playing an one-off show at St Kilda’s Pure Pop
Records on Sunday July 25th. You must be very excited
about that. Can people just rock up?

Hell yes! We whole heartedly encourage people to do just that. We love playing at Pure Pop-they’ve always been really nice to us and it’s such a great intimate space to see music. 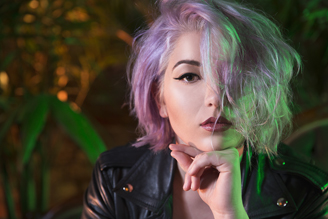